An exuberant example of the joys of fringe theatre, which will have you howling with laughter, writes Lucy Brooks 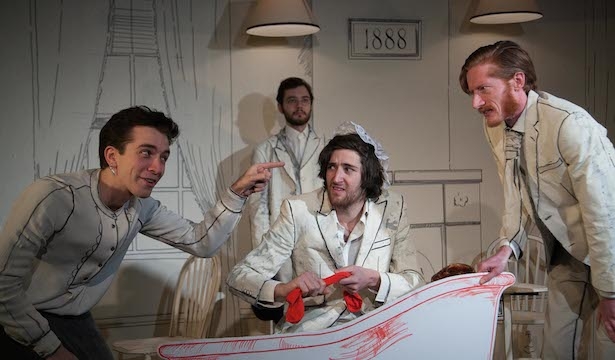 Diary of a Nobody photo courtesy of Rocco Redondo.
Evelyn Waugh thought Diary of a Nobody was 'the funniest book in the world' and its hero Charles Pooter is such a stock figure of literary comedy he has his own adjective. This imaginative adaptation of George and Weedon Grossman's satire on late Victorian suburban life captures the definition of Pooterish with aplomb.

A scrawled black and white set, complete with line drawing style costumes creates a living cartoon from the original sketches in the book. Rather than 'making do' with the limited set opportunities offered in fringe theatre, the show celebrates the makeshift in an amusing muddle of moving doors, swapped hats, glitter and, at one side-splitting moment, actual egg on an audience member's face.

The biggest challenge faced by theatre company Rough Haired Pointer when adapting the diary format for the stage was to maintain the protagonist's dominant voice and often skewed perspective. His frequently hilarious lack of self-awareness was brought to life by George Fouracres, playing Pooter with a trembling anticipation for his own next punchline, and the ensemble cast around him, who would occasionally ventriloquise the self-proclaimed Nobody's little self-evaluative afterthoughts. The comic timing, chemistry and flashes of inventive improvisation displayed by Fouracres and fellow cast members Jake Curran, Jordan Mallory-Skinner and Geordie Wright is the show's biggest boon; even if slapstick isn't your thing, we recommend seeing show just to spot these future stars in the intimacy of the Kings Head Theatre.

While it may not be the most profound thing you see on stage this year, Diary of a Nobody is delightfully unpretentious, celebrating frivolity and showcasing four impressive comic actors without trying to draw out anything more meaningful than quotidian charm and infectious comedy of the book