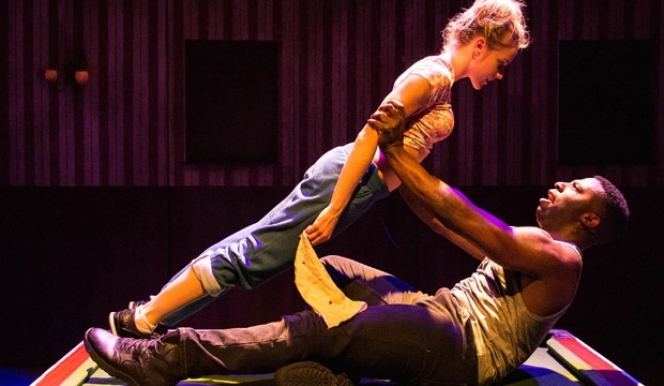 Culture Whisper Review: Othello, Lyric Hammersmith Theatre ⭑⭑⭑⭑⭒
Frantic Assembly's taut, pacy adaptation of Othello takes just the skeleton of the story -- and what's lost in poetry is replaced with electric immediacy. In under two hours, with a background throb of bass, the transformation from devoted husband to killer becomes as thrilling as it is tragic. Plot devices are made plausible as Laura Hopkins's set shifts to create dark corners in which to eavesdrop. The grotty pub setting and implicit poverty make conflict and domestic violence feel disquietingly tangible. In this distinctly macho setting, each bottle of beer is a potential weapon and a skirmish over a game of pool escalates in an instant to full bloody brutality.

The play is at its most powerful without any dialogue, in the intermittent bursts of pulsating physical theatre. Antithetical themes of love and destruction are framed beautifully as a balletic moment of intimacy between Othello and Desdemona on the pool table is followed by the raucous revelry of the drinking scene. Ryan Fletcher as Cassio makes for a charmingly comic and vulnerable drunkard, whose flailing movements are mirrored by the snaking movement of the set to spectacular effect.

With Othello's mediations and story-telling skills largely missing, the show belongs to Iago. Stephen Miller's tracksuit-wearing dissembling villain was a masterful mixture of shifty and smooth, with the ambiguity over motivation in Shakespeare's text clarified as a toxic combination of racism, jealously and misogyny.

Perhaps the biggest challenge is making Desdemona plausible in a modern context. With a name that means 'unlucky', Shakespeare's heroine is relegated as victim. But both Kirsty Oswald's Desdemona and Leila Crerar's Emilia bring sass and sharpness that makes them relatable. And in the confines of the ladies lavatory, half-laughing, half-crying before the fateful final scene, they radiate warmth and realism.

What's missing is the subtlety of the tragedy and the physiological undercurrents that weigh on your mind long after the tragic loading of the bed - or pool table in this case. It's one of the few times that the final scene of Othello hasn't left us crying into our own handkerchief. But, while the language lacks tragic tension, the aesthetics of the this final scene are arresting in their own terms. The brutality of Iago's treatment and the captivatingly choreographed strangulation scene make the inevitable deaths shocking again.

For all its exhilaration and bravura, Frantic Assembly's Othello comes with a caveat: if the thought of a gutted version of Shakespeare's text turns your stomach, then prepare to be aggrieved, and perhaps book for the Globe instead...