EDITOR'S PICK: 'Recording in Process' is something entirely new to Somerset House: PJ Harvey records her latest album in front of an audience. Culture Whisper explains. 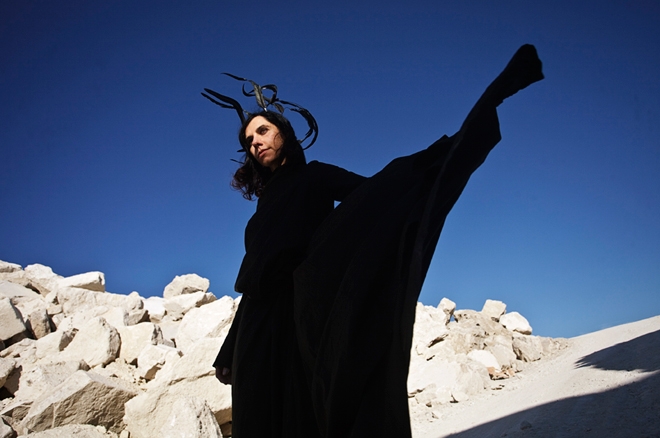 P.J Harvey turns Somerset House into a Recording Studio
Composer and singer-songwriter P.J. Harvey can play the accordion, the autoharp, the organ, the saxophone, the piano and the guitar. She is also Nick Cave's ex, an MBE and by
far and away the most understatedly cool English girl of the last three decades. Harvey is pure theatre: each album is accompanied by a fully conceived character. First there was the stompy Doc Martens and black polo-neck, then the ballgown and wig, then dragqueen splendour.

And yet there seemed to be a time when the vocalist and multi-instrumentalist was gently settling into middle age, jettisoning the wild blues of her earlier work for well-made but unexciting indie rock. Thankfully, that time now feels long past. First came White Chalk (2007), a bewitching set of piano-led folk that saw her voice soar like never before. And then there was Let England Shake (2011), her genre-hopping, Mercury Award-winning exploration of war. One of the defining artists of the 1990s is now a definite artists of the 21st century.

With the sold-out Recording in Progress event at Harvey steps into uncharted territory. For a month, she and her band will lay down their new album from behind a one-sided wall. Lucky ticket-holders will, for forty-five minutes, be allowed to witness the creative birth of her upcoming work – whether moments of inspiration or frustrating longueurs. In doing so, Harvey will open up the recording studio like never before. Which aspects of the process you encounter is down to chance, but one thing is for sure – this something unprecedented in both art and music.