It's man against the machine this winter as bold boundary-breaking theatre company 1927 satirise technology in a spectacular family show. 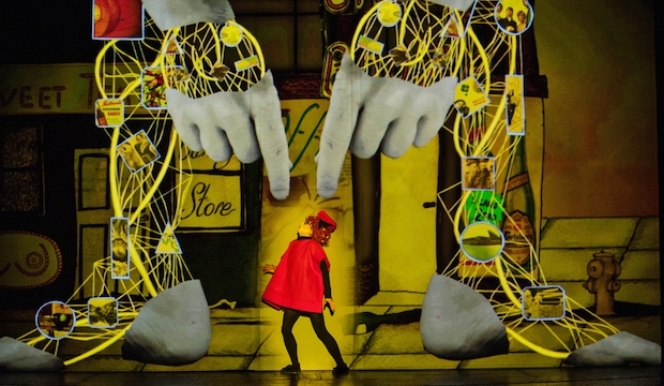 Technology takes over and man and machine become unbreakably connected in an inventive theatrical exploration of modernity. Golem depicts the misuse of appliances and gadgets through a striking fusion of live storytelling, music and original animation.

There's nothing fluffy about the show's inspiration or execution: drawing on Gustav Meyrink's story of a creature that embodies the collective minds and imaginations of the community, it turns the legend of the Golem into a darkly dystopian stage world where moulded monster subtly starts to seem normal. Innovative technology combines with classic stop motion techniques to vivid and witty effect. Though there are copious chuckles this resolutely not a comedy. The dark strand, that kind of dystopia that appeals to audiences of all ages, delves into our ever-growing obsession with machines and ideas of progress to unsettle expectations.

This is far from the standard festive theatre fare, but the exploration of consumerism has a particularly pertinent messages for kids dreaming of piles and presents and the parents pressured into buying bigger and better gadgets. What's even more special is the way in which the underlying morals are communicated: there's no preaching, but the vibrant visuals of the show work to stimulate ideas imaginations and subvert preconceptions. 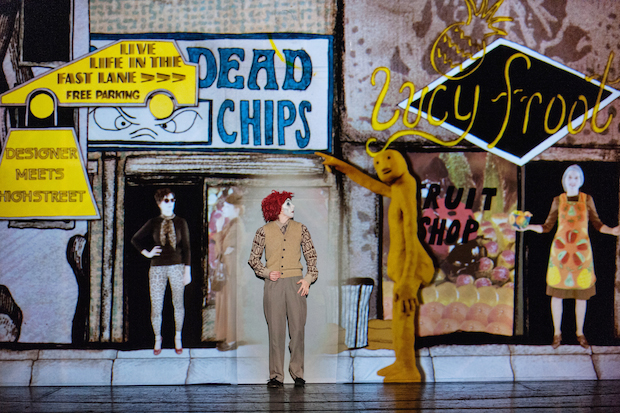 1927: Theatre company
Golem is the latest offering from award-winning 1927 Theatre Company, the experimental team behind The Animals and Children Took to the Streets, which enjoyed dazzling success with two sellout runs at the National Theatre.
Bringing some Hackney cool to the Southbank this young company collaborate on their creations: Paul Barritt envisages and creates the distinctive illustrations and Suzanne Andrade writes, directs and, sometimes, performs. Named in honour of the year that silent films were usurped by talkies, the company combine this sense of technological progress and a nostalgia for a purer, more visual form of communication. Andrade’s background in cabaret performance combined with Barritt’s evocative animations make Golem a visual treat, in-keeping with the company’s signature aesthetic: ‘like a giant graphic novel burst into life’.

Golem review: our verdict
While this is a refreshingly original, engaging and stimulating show for the littles ones it absolutely not just for children. As relatable as it is weird, this is a show to open the mind and entertain in the most complete sense: with a gripping story, endlessly inventive animation and a stunning live score.