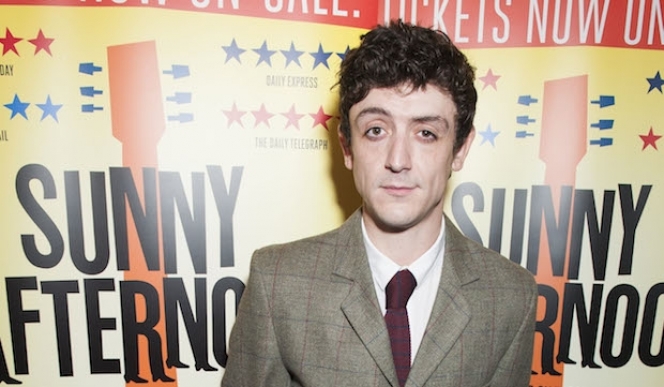 John Dagleish, actor: my London cultural life
John Dagleish, actor, has the sort of tragi-comic face casting directors love. His cheerful physiognomy is perfectly at home in the cosy rural world of Lark Rise to Candelford, the BBC adaptation of Flora Thompson’s 19th-century memoir in which he was cast as Alf Arless (landing the part the day after leaving drama school).

Yet the same face turns on a sixpence to portray the darkly eccentric English melancholia of Ray Davies, the Kinks frontman and hugely influential singer-songwriter he plays in Sunny Afternoon.

The musical, based on the Kinks back catalogue and written by Joe Penhall,  transferred to the West End after a highly successful run at the Hampstead Theatre and has just scooped an impressive five nominations in the 2015 Oliviers.

‘I first got involved two and a half years ago,’ Dagleish tells CW, ‘when Ray Davies’s agent asked me to take part in a workshop for the musical. I stuck my flag in the role and made it my mission to get the part. It was important to me that Ray didn’t want someone to impersonate him; he wanted someone who would pull the script apart and play it in their own way.'

‘I’m a massive fan of the Kinks. Their songs are written introspectively, even voyeuristically, looking at the world and wondering where they fit in. The songs are about small things that everyone can understand rather than grand themes or ideas.’

For all the joie de vivre of some of the Kinks songs an undeniable strain of sadness and even misanthropy runs through them too – hardly surprising, perhaps, given Davies’ episodes of bi-polar disorder, his feud with his brother, and their record label’s mismanagement of the band’s affairs.

‘It is a dark headspace to inhabit because I’m playing a tragic, tortured person,’ says Dagleish. ‘It can be hard to switch off at the end of the show. But what I love about performing is that tension – you make the audience laugh, and then make them feel guilty for laughing; or you make them feel sad, then rescue them with a joke. It’s like George Bernard Shaw said, “Life does not cease to be funny when people die, anymore than it ceases to be serious when people laugh”.’

Sunny Afternoon is booking until 24th October 2015 at the Harold Pinter Theatre in Panton Street.

The National Portrait Gallery. When I’m researching a part I go and find a portrait I think that character might look like. Sometimes I feel the subjects are looking out at me rather than me looking at them – there’s such a strong sense of connection with those paintings.

The John Soane Museum. It’s just some guy’s collection of art in a house and it’s like a wizard’s study at Hogwarts with weird things in formaldehyde and layers of paintings 40 or 50 deep on hinged panels.

Waterloo Bridge! Every time I cross the river, which is the only place in central London where the city opens up, I feel lucky to live here. I have to pinch myself.

I like Le Relais de Venise in Marylebone, where they just serve one thing: steak frites with a green salad. For a treat, Champagne afternoon tea at the Wolseley is good.

The Boogaloo in Highgate is a great little dive with a DJ where all sorts of people go and it’s very un-cliquey. On Friday and Saturday they play vinyl from the Fifties and Sixties and absolutely everyone dances.

That was probably seen Jonny Greenwood from Radiohead perform at the Royal Festival Hall with the London Philharmonic Orchestra. At the end Thom Yorke came on and they did some stuff from their album In Rainbows that was haunting.

Everyone knows Highgate Woods but Queen’s Wood is smaller, darker and wilder – gnarly and old and less well-trodden. It is so close to my house that I go for a walk there at last once a week.

It’s not very romantic but I’d keep it casual and take them to the pub which is probably the best environment to get to know someone. I’m from a little village in Essex and I like Highgate because it feels like a village too. The Flask is one of my favourite local pubs.

That would entirely depend on the person…

Jacksons Lane is an arts venue that specialises in children’s theatre [the winter programme features Michael Rosen, Hansel & Gretel, acrobats the Spavaldo Brothers, and much more].

Sunny Afternoon is pretty much all-consuming; trying to do anything else is a bit exhausting. But I was in Silent Witness in January and you can see me in Jonathan Strange and Mr Norris when it’s broadcast on BBC1.

Who is your current cultural/fashionable crush?

A singer-songwriter called Will Heard, who I saw perform at Soho House. He’s a guy with a guitar in his twenties and when he played, the whole room just fell silent. Very soulful, you can’t believe he’s so young because there’s so much life in the kid.