Guide to Glastonbury: How To Do the Biggest Music Festival in Britain

From camping to Hare Krishnas, how to style out the world's biggest festival: be a happy camper with our beginner's guide to Glastonbury 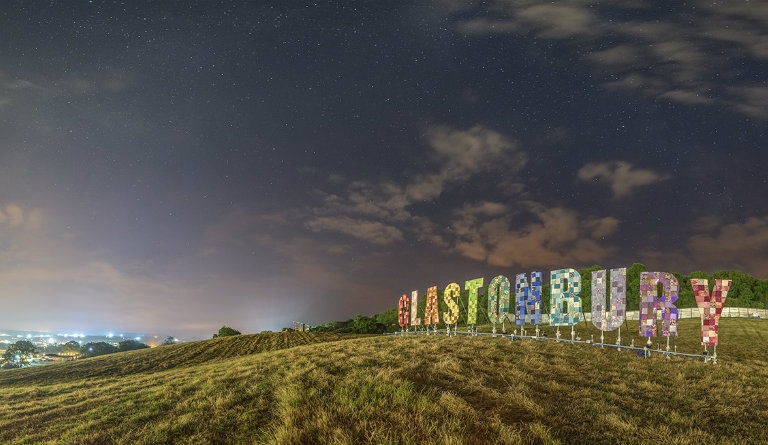 Tickets - Glastonbury Music Festival 2016 (June 22-26). Photo by Kris Williams
Everyone should go to Glastonbury at least once in their lives (here's how to guarantee you get a ticket).

After all these years, it still has a uniquely good-natured and almost spiritual atmosphere (think the good karma of Goa in deepest, darkest Somerset) and is so huge that everyone can find somewhere they feel at home.

We’ve all seen them. The miserable photographs of submerged tents, roofs protruding from the mire like dorsal fins. This is utterly avoidable: we'll teach you to camp like a Glastonbury veteran... 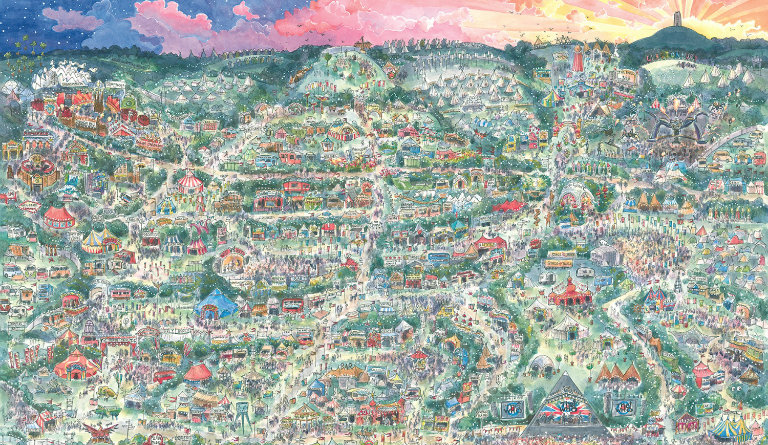 Knowing where to pitch is essential. The most popular spots fill up very quickly indeed, as the die-hards arrive from 8am on Wednesday morning. It’s worth getting to the site as early as possible. In case you can’t get down 'til Thursday or Friday, this is what you need to do to avoid cooling your blood in notorious mud, or ending up down-wind of the infamous long-drop loos:

First of all, find one of the high-viz wearing, impossibly cheerful stewards: tireless sources of walkie-talkie-wisdom.

The most peaceful sites are furthest from the action (and the noise) and higher up. They afford the happy camper great views and respite from the floodplains below. In the north-west, Hitchin Hill and Lime Kiln Ground are safe bets – though make sure not to pitch on a slope. Night-owls, beware: it’s a long uphill slog back to home-base from the nocturnal naughtiness in the south-east corner. Bailey’s and South Parks 1&2, tucked away at the bottom of the site, don’t fill up quickly either, and are secluded and peaceful.

If you have kids in tow, head to the designated family areas Cockmill Meadow or Wicket Ground (for smaller children). 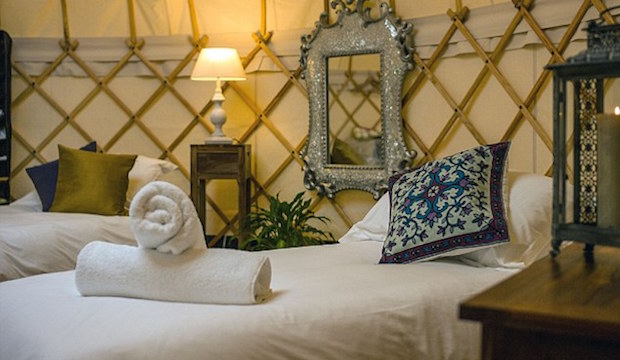 Wet-wipe baths, dry shampoo, breathing through your mouth: slumming it is part of the fun. But if you really can’t face it, here’s how to go Glasto-luxe.

Next to the Stone Circle is a field bristling with the poles of 18 foot Tipis, which sleep six and can be hired for £975. The Tipi site offers hot showers, compost toilets (don't raise a single eyebrow – these will appeal much more when you encounter the long-drops), food, drink and a communal fire. They’re available to book when paying your ticket balance (April).

Tangerine Fields, Pillow, Pennard Hill Farm and Cockmill Hideaway provide kingly accommodation for princely sums. Land & Sky offer an exquisite yurt and 5 star luxury, including 24-hour security, a gourmet restaurant and exclusive access passes; but the price will make you wince. So will The Love Fields, though they have a wide range of prices, and also a pitch your own tent area with luxury showers and loos and spa facilities. Yurts and Squrts, tucked behind the John Peel Stage, provide hot showers, a bar, phone-charging and a beauty station. The yurts are incredibly good value, but tend to sell out, so make sure you book as soon as you have secured a ticket. The Pop Up Hotel and its younger, self-catering sister the Pop Up Motel, have a range of packages, from reasonable to ridiculous: but all provide hot showers, hairdryers, vanity tables, private restaurants, private car-parking and undercover areas with toasty fire-bowls.

At the absurd end of things, germaphobes with money to burn can hire a luxury Indian tent in the boutique Camp Kerala, complete with a spa, gourmet kitchen, backstage passes and possibly a guilty conscience. Prices start at £8,225. Fly Glastonbury, at £300 + VAT a head, offer luxury campervans, a bar, hot food and a helicopter ride out on the Monday morning. 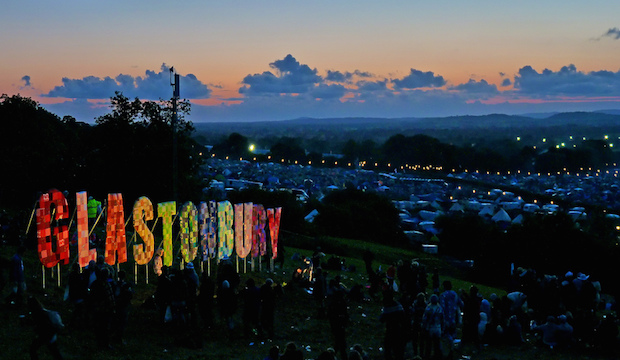 Glastonbury is impossibly vast. There’s much more to the festival than elbow-jabbing through the Pyramid Stage crowd and getting down ‘n’ dirty after hours in dystopic Shangri-La. By all means, pick a few main-stage headline acts but the secret to Glasto success is to explore the infinite nooks and crannies.
To get you started, here are some curiosities to seek out:

The Sisterhood
One of the newer additions is this female-only area, described as an “intersectional, queer, trans and disability-inclusive space” with live music, DJs and workshops on intersectionality, diversity and inclusion, in an attempt to topple the patriarchy.

Underground Piano Bar
This tiny spot, six-feet under and lit entirely by candlelight, can only be found with good luck or good contacts. Some still doubt its existence, convinced it’s the invention of drug-addled minds. It’s usually dug somewhere near the stone circle and is an Eavis favourite – so if you see the founder riding around in his tractor, don’t let him out of your sight.

Daemon or Doppelganger?
Voodoo meets Play-Doh at this stand, which is peopled by self-portraits, fashioned from clay, of Glastonburians past and present. Get kneading.

The Rabbit Hole
By the Park Stage, just behind a viewing tower, is an unassuming bar marked sometimes by oversized carrots, sometimes a monstrous white bunny. When you enter, look around and you’ll spot a tiny door, manned by a sphynx-like bouncer posing riddles. Puzzle it out and you can crawl through the oesophageal tunnel à la Alice into Wonderland. At the end, you'll find an alarmingly tilted disco-Tipi, populated by rock-royalty, real royals, transvestites and mushrooms.
Crow’s Nest
Perched on a hill at the top of the the Park Field is the small-but-mighty Crow’s Nest tent. It may be one of the smallest stages but it attracts huge names and a loyal crowd. Make sure you pay a visit. The schedule is announced on a blackboard every day, so hike up and see who’s on, and check the Twitter-feed for live updates.

Green Fields, Glastonbury
If you’re feeling a bit ropey and need some healing – spiritual or otherwise – head down to the blissed-out Green Fields area, where Glastonbury’s trippy-hippy spirit endures. The purpose of this 60-acre network of fields is to promote happiness and health; both human and environmental. Set aside half a day to explore this pop-up city, where everything is powered by green energy. You’ll encounter bicycle-powered bandstands, meditating monks and bread fresh from a giant, bee-shaped wood-oven. In the heart of the Green Fields is an old Oak, the magical Wishing Tree, on whose branches the hopeful can tie hastily scribbled wishes. You can earnestly pick up a new hobby in The Craft Field, where you'll find workshops on stone masonry, survival skills, didgeridoo, spoon carving, Morris-dancing, pottery and other outdated pastimes. The Healing Fields will tell you all you need to know about alternative medicine and how to pull off interpretive dance in wellies. Finish off in the Peace Garden, next to the stone circle where you can contribute to the Peace Book, witness a pagan wedding, meet a druid or two and feel the love.

Hare Krishnas
No Glastonbury is complete without a visit to the Hare Krishna tent, located next to the Spirit of 71 stage – though they have a smaller base in the Healing Fields, too. They’re extremely accommodating. Their chant is easy to pick up:

and you get to ring some bells – what’s not to love? One member of the Culture Whisper team stayed with the Hare Krishnas for a whole day and remembers it fondly, if little.

Sunset on the Hill
Head to The Park at very south-west of the festival site, landmarked by the giant ribbon tower and climb to the top of the big hill. From there, looking westwards, the sunset is incredible, with the whole of Glastonbury spread before you; and watching the site light up at twilight is even better. 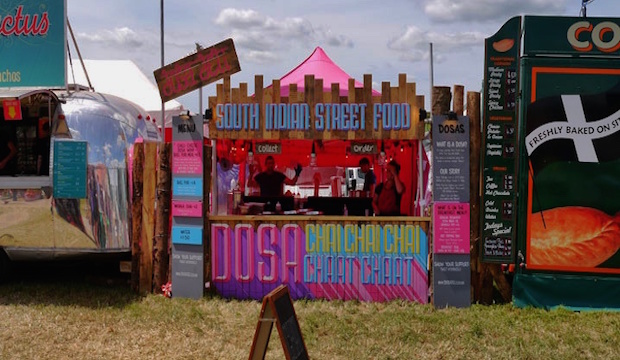 The food at Glastonbury is second to none. With over 500 pop-ups and stalls, there is something to suit every palette, tantrum, dietary requirement or hangover. Part of the fun is setting off from your tent with an appetite and following your nose, but here are some traders to look out for.

The Goan Seafood Company are a festival-circuit stalwart. Usually in the West Holts Field, their fish curry (Cornish fish, South-Indian recipe) is magnificent. Oli’s Famous Halloumi Cones is another popular vendor, as the lengthy queues snaking around the Pyramid Stage will attest. It’s worth the wait.

Keep an eye out for La Grande Bouffe in West Holts, which serves rich traditional French cuisine as well as formidable crepes.

Henry's Beard cafe serve our favourite organic breakfasts by a country mile. Those feeling a little bleary, head to Green Field’s and look for the big grey tent strung with bunting. Their vegetarian breakfast is famous, though it’s worth getting down as early as possible. Those needing to perch will find tables, benches, high chairs and sympathy.

You’ll find heaped platefuls of fantastic vegetarian food in Greenfield’s, as well as freshly baked bread, organic milk, juices, young coconuts and, recently, a farmer’s market. A tractor-borne dairy farmer does the milk round every morning, charging £1 a pint.

For every vegetarian curry, there's a beautiful organic burger or pile of pulled pork, so carnivores need not fret. For a fine-dining Glastonbury experience, head to Malinkey’s. It started life as a horsebox and is now a restaurant serving silver service 3-course English fare, at £24 a head. With wine and champagne from £18 a bottle. 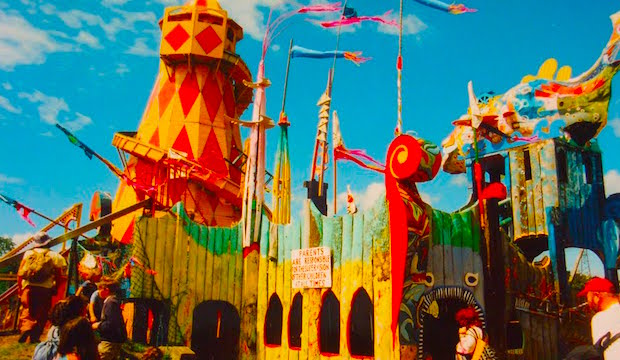 They might not be able to hack the biggest crowds that swell for the headliners, but fake a doctor’s note: it's worth taking them out of school for.

Glastonbury is definitively child-friendly. The atmosphere is harmonious; it’s big enough that there’s rarely a crush; and kids under 12 go completely free. It is, essentially, a massive, shiny playground. Just stick them in a wheelbarrow and off you go.

There are specific zones for children however, such as Kidzfield at the very top of the site. This area, open til 7pm each day, is a miniature festival in its own right: pulling in the biggest names in children’s entertainment.

There are the customary face-painters, clowns, magicians, acrobats and bouncy castles, along with a sandpit — but banish thoughts of lacklustre children's parties: all come with a magical Glastonbury twist.

Head to the Green Kids Area in Greenfield for some peaced-out child's play, including a performance marquee, craft tents, puppet theatres, face-painting, a camera obscura and a giant wooden ark for would-be pirates. Glebeland (aka Theatre Field), Cinemas, Cabaret Tent and Field of Avalon all put on kids’ shows mostly in the mornings when the childless or reproached parent is sleeping it off. Check the schedule when it’s released.

The Circus Field is always full of children: the Big Top stage attracts some of the best acts around. Kids’ll get kicks from the strange landscape populated by unicyclists, stilt-walkers, fire breathers, and trapeze artists — but may come away with the intention of becoming a sword swallower.