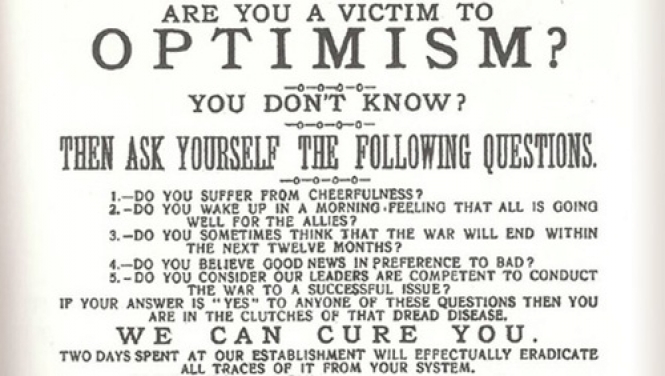 The Wipers Times: the satirical trench magazine of WWI

It may not be the biggest or the most famous of literary festivals, but the Soho Literary Festival is fast becoming one of London’s annual essentials for the culturally in-the-know, and is particularly prized for being unusually intimate. Now in its fourth year, the festival attracts an eclectic bunch of writers and thinkers who gather at the Soho Theatre to entertain, inform and cosy up with audiences no bigger than 150 people. And with signings taking place in the bar afterwards, the whole thing feels more like a convivial salon than a formal event.

Top of the wish list in this year’s enticing programme is Stephen Fry, who will be reflecting on the comedy genius of P. G. Wodehouse , as well as the writer's marked influence on his own life. Fry is not only an avid reader of Wodehouse, of course; he famously played Jeeves to Hugh Laurie’s Bertie Wooster in the pitch-perfect TV series Jeeves & Wooster, which for many will always be the definitive portrayal of the legendary duo. With his frightening intellect, comedy clout and all-round affability, who better to analyse the elegant phrasing, delicious humour and enduring popularity of Wodehouse’s work?

There’s plenty more on offer if you want to stray a little further from the beaten track, though. Private Eye editor Ian Hislop and cartoonist Nick Newman will be discussing the extraordinary satirical magazine to come out of the hell of the First World War trenches at Ypres, The Wipers Times (Wipers being army slang for Ypres). And for foodies, ‘Waiter!’ The Art of Service brings together Michelin-starred chef Michel Roux Jr, Polpo maestro Russell Norman and author Imogen Edwards-Jones to debate this essential element of good dining – and perhaps why Britain is not traditionally renowned for it…

Any fan of both literary history and writing itself should get themselves a ticket to Letters of Note: The Art and History of Letter Writing . Simon Garfield’s book To the Letter tells the sad story of this lost skill in an age of tedious emails, while Shaun Usher has built a phenomenal collection of important letters – shocking, moving and funny by turns – from the likes of Virginia Woolf, Gandhi and Elvis in his book and hugely popular website Letters of Note. Combined they form a fascinating event, and their live readings have been going down a storm at other festivals this year.

The festival will also reprise some big hits from previous years. How to Spot a Psychopath proved so popular in the past it's now back for the third year running. Forensic psychologist Kerry Daynes and Professor of Developmental Psychopathology at Cambridge Simon Baron-Cohen give expert and often darkly humorous advice on the curious – and rather useful – pastime of identifying the psychos in your life. While bookworms, geeks and quizzers alike will be gratified that The Big Literary Quiz is also scheduled to return. Last year’s victors, the girls, lead by Rachel Johnson, will be back to defend their title against the boys, including Times restaurant critic Giles Coren and Silent Witness actor Tom Ward. Expect laughs, literary trivia and some seriously competitive quizzing.

Other speakers include Antonia Fraser, Roger Bannister, Brian Sewell, Peter Snow, Tom Parker-Bowles, Emma Bridgewater and Stephen Frears, and that’s not even the end of the list. There are 36 events in all, and each costs a maximum of £9, so it's little wonder that tickets always sell out in lightning-quick time. You have been warned.