The best ice-cream in London: 2022 edition

With the city hotting up once more, here's where to find the best ice cream in London 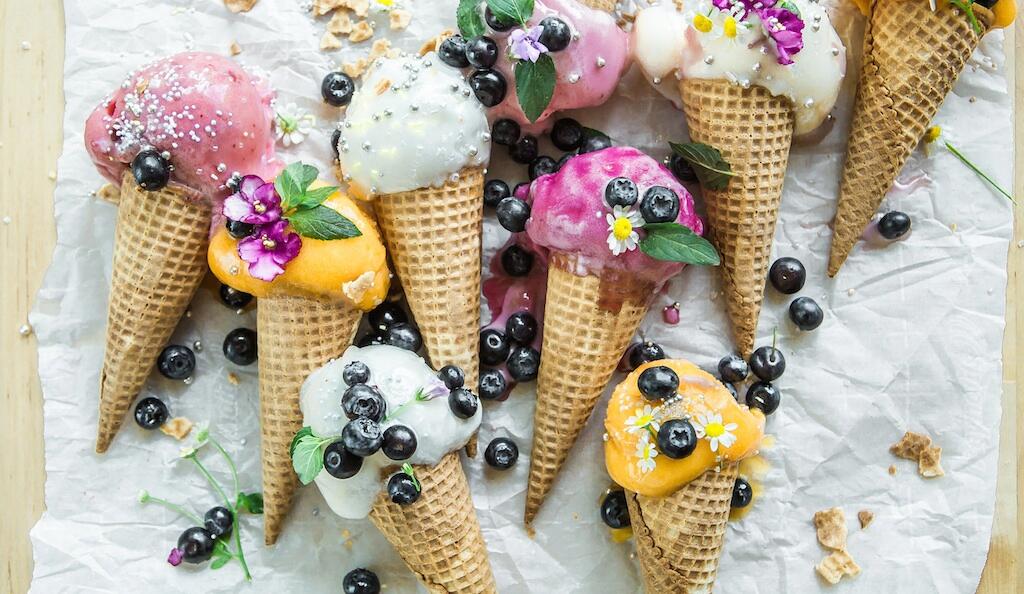 London's best ice cream parlours
Sharp sorbets, smooth gelato and guilt-free froyos in all the flavours under the sun – cooling down has never been so delicious. Whether you prefer a classic cone, an Insta-ready marvel or a tastebud-testing new flavour, read on for Culture Whisper's round-up of the best ice cream shops in London.
Gelateria Romeo & Giulietta
Location: 137 Albion Road, London N16 9JU 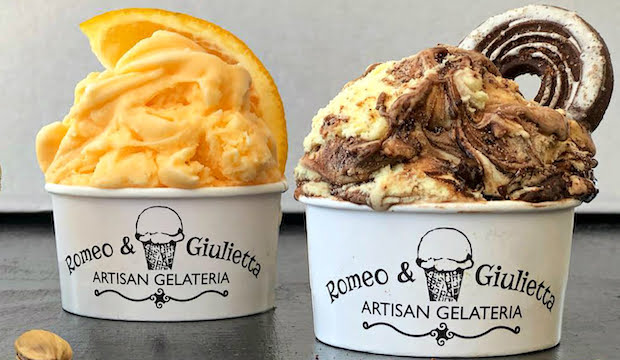 This picture-perfect, neighbourhood ice cream parlour is Stoke Newington's worst-kept secret. Regardless of the time of day you visit (and the shop is open Tuesday - Sunday, 2pm - 9pm), you'll have to join the queue snaking out the door and around the corner if you want to sample its scoops. But believe the hype: husband and wife duo Ciprian and Iuliana might be Romanian nationals, but a stint in Verona and special recipes from Rome have them producing some of the finest gelato in London. Flavours favour classic Italian tastes: try the ricotta and caramelised figs; hazelnut; or black cherry praline for something different. 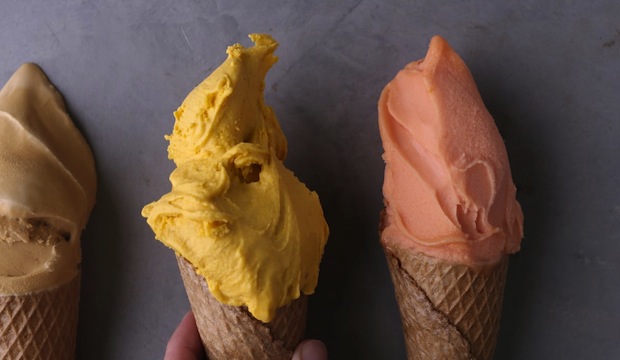 Ice Cream Union has been delighting Londoners for years with a vast array of flavours, often produced with homemade or hand-selected ingredients. You might have bought a cone from one of its ice-cream bikes in the past, or a tub served directly from the warehouse close to Maltby Street. Last year marked the opening of Ice Cream Union’s first proper parlour on Pavilion Street in Chelsea.

Among its rotating flavours – of which there are over 50 in total – are several which use house-made nut pastes, while others boast hand-selected Sicilian blood oranges and homemade honeycomb among the listed ingredients. If you like yours alcoholic, try one of the limited-edition sorbet flavours, such as Aperol spritz, champagne or Pimms (yes, really). 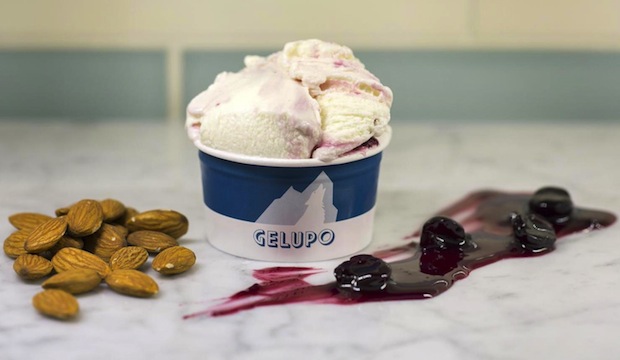 In the eyes of many London foodies, including Culture Whisper’s food editor, the best gelati in town come by way of Gelupo, a gelateria owned by the team behind acclaimed Italian restaurant Bocca di Lupo. Expect exquisite flavours and limited-edition scoops showcasing flavours from various provinces of Italy. The parlour is currently operating a takeaway service, while the team are also delivering tubs by hand. You'll want to order in advance, though; at the time of writing, the next delivery slot is four days away. 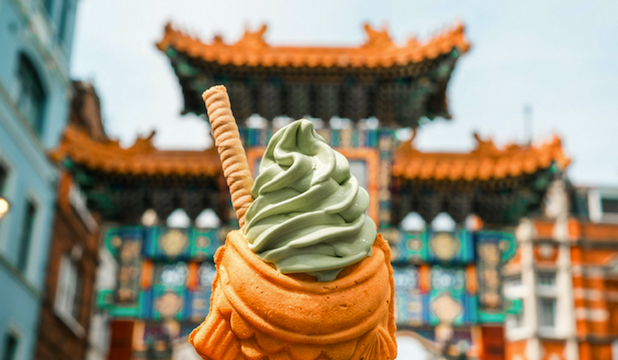 London's Chinatown is known for many things, among which are its taiyaki fish (golden, fish-shaped batter filled with custard) and ice cream parlours serving an array of exotic flavours in even more unusual cones. Thanks to sumptuous-smelling Bake, you can kill two birds with one stone and get a soft-serve ice cream in a taiyaki fish cone. The ice cream itself comes in vanilla and matcha, while a Pirouette-shaped biscuit fills in for a Flake. Yes, Chinatown is known for many things, but few are Instagrammed as frequently as this unusual dessert. 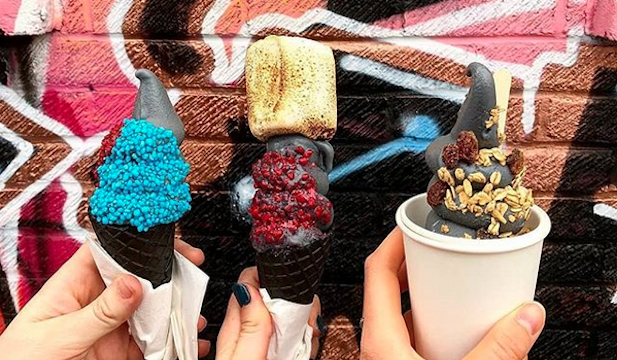 While the mere shape of the ice creams here might resemble a Mr Whippy, once you’ve chosen your flavour, added your toppings, and then some more on top of that, the offering at Soft Serve Society is anything but. Premium flavours and fun-loving extras are what this parlour’s all about. Whether you go for a sundae, a freakshake or a simple soft serve, your eyes and tastebuds are in for a treat. 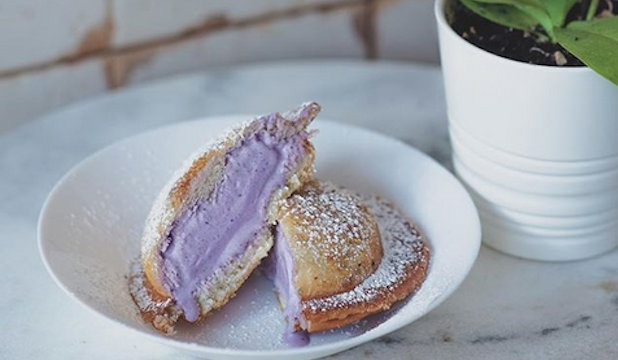 Europe is home to just three Filipino ice cream parlours. The good news? All branches of Mamasons Dirty Ice Cream are in London. First came a little shop in Camden which proved so popular the team opened a second branch in Chinatown then a third in the Shepherd's Bush branch of Westfield shopping centre. You won’t find the likes of vanilla, strawberry or mint choc chip here; instead, all scoops are inspired by flavours of the Philippines (think Ube – a vibrant purple yam with a unique earthy taste; Milo – malt chocolate powder; and Black buko – a coconut concoction made with activated charcoal). We recommend going all out and getting yours served as a hot ice cream sandwich. 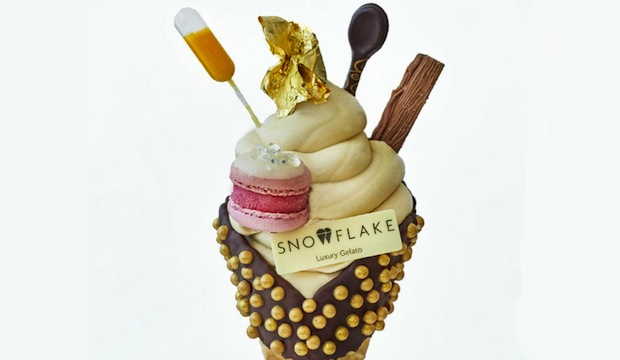 If it's a seriously luxurious scoop you're after, Snowflake is the way to go. In 2018 the Selfridges branch released the Billionaire Soft Serve (yours for a crippling £99), which weighed nearly 400g and came complete with a Flake wrapped in gold leaf. Thankfully, other items on the menu aren't quite as extravagant. Our personal favourites are the white chocolate and rose water, and the Hot Fudge Snowdrift (caramel, chocolate and vanilla with fudge and honeycomb, smothered in chocolate and topped with hot fudge sauce). 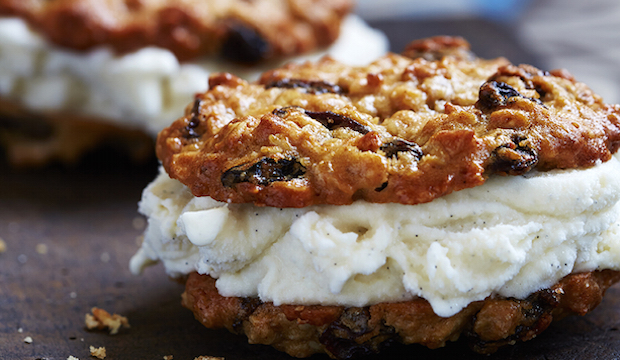 This ice-cream parlour with locations in Tufnell Park and King's Cross serves handmade sorbets and gelati in high-brow flavours like pistachio, rosewater and masala chai. It’s very yummy mummy, but heavenly all the same. There's a £15 minimum for online orders, which must be placed by 5pm the day before the requested delivery date. Deliveries are made on Wednesday, Friday and Sunday afternoons. 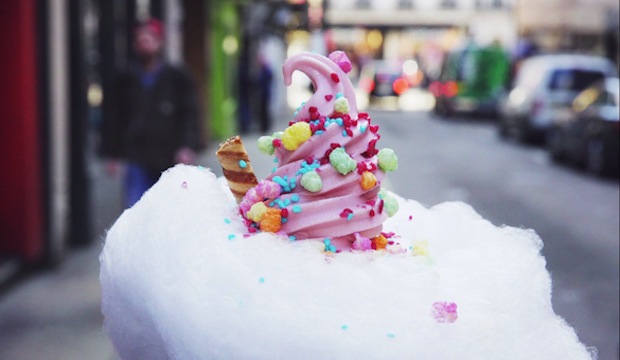 The most Instagrammable ice cream in London, and probably the world, comes by way of Milk Train, where the scoops come floating on a bed of candy floss (don't worry, there's a cone for support, too). As well as the usual flavours, you can tuck into matcha and tangy yuzu, while the sweet shop toppings are worth the trip alone. Be warned, this Covent Garden gem has a queue winding out its door virtually all year round. 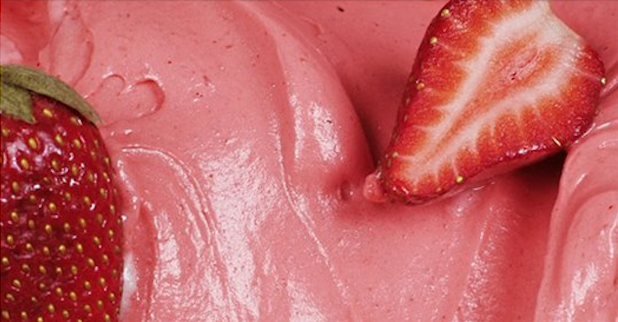 This cutesy neighbourhood ice-cream parlour perched on the edge of Clapham Common often has a crowd outside its doors. Keeping things traditional with genuine Italian ice cream, Nardulli has a friendly, family atmosphere and a wide variety of flavours sold in cones, cups or – for those looking for something a little more hearty – on crêpes or accompanying cakes. 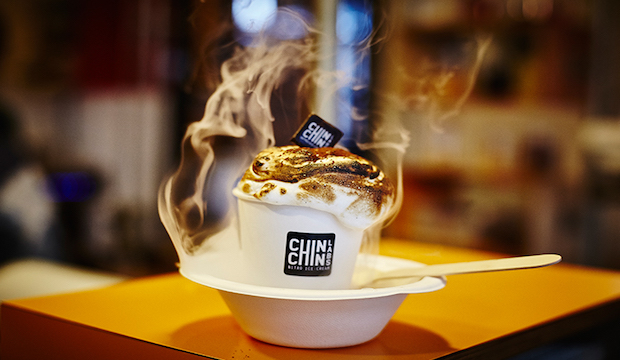 Back in 2010, Chin Chin Labs were the original nitro freezers; nine years on, their tag line 'the future of ice cream' might have lost its freshness, but their ice-cream certainly hasn’t. With a catalogue of avant-garde flavours (strawberry and hay springs to mind) on continual rotation, a visit to one of their parlours guarantees a surprise. Expect a theatrical experience complete with nitrogen tanks, goggles and lab coats. 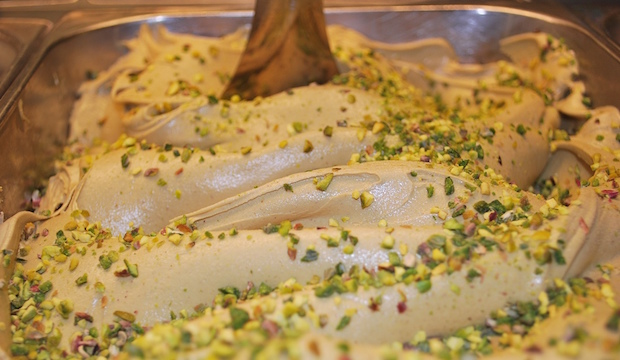 'Life’s too short to eat bad ice cream' say the folk at Oddono’s Italian ice-cream parlour. We couldn’t agree more and thankfully, the gelati served here are among the absolute best. Whether you try the South Kensington flagship, or drop by one of the other four branches, no flavour will disappoint, but we have a special soft spot for the pistachio. 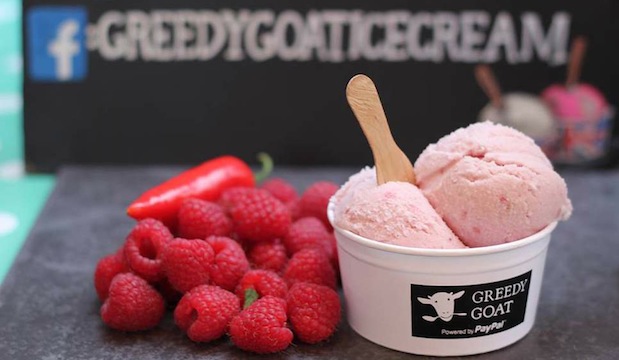 With its offering of ice cream made exclusively with British goat's milk, Greedy Goat is a little different from your average parlour and a Borough Market staple. The flavours are unusual too, with honeycomb, gin and tonic, and raspberry Eton mess among them. 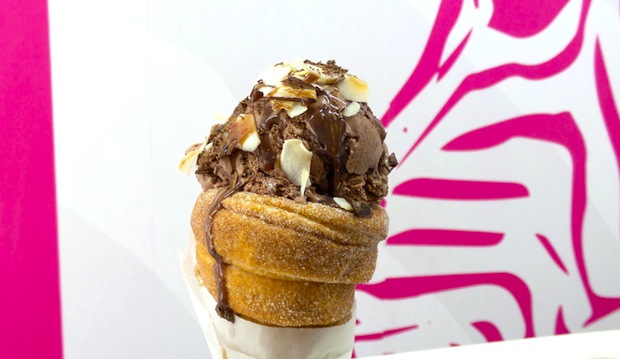 If, for some reason, egg waffles don't appeal to you, try Dum Dum Donutterie's doughnut cones. Flavours include Crême Brûlée, Boston Creme and the Zebra: layers of croissant dough and chocolate croissant dough, filled with chocolate buttercream and topped with chocolate ganache. With branches across London and further afield, chances are you'll come across one on a hot day this summer. 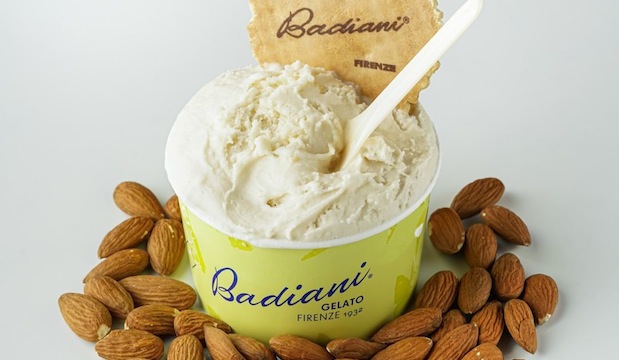 Founded in Florence in 1932, the Badiani brand now boasts four glossy ice-cream parlours in London and a further outlet at Italian food market Mercato Metropolitano in Elephant and Castle. These high-quality gelatos are silky-smooth and laced with further enticing ingredients. There are over 100 flavours to choose from, plus fruity gelato glasses and chocolate-coated gelato cookies. 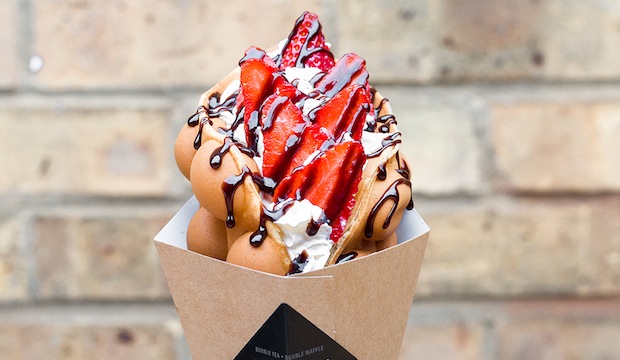 Childhood dreams you never even knew you had come to life with a trip to Nosteagia at Boxpark Shoreditch. Here, the specialities are bubble waffle cone ice creams and bubble teas. With your ice cream tucked snugly inside this edible bubble wrap, you'll never have to worry about losing a scoop again. There's a range of fun flavours too, including Marshmallow Chocolate and Bananarama. 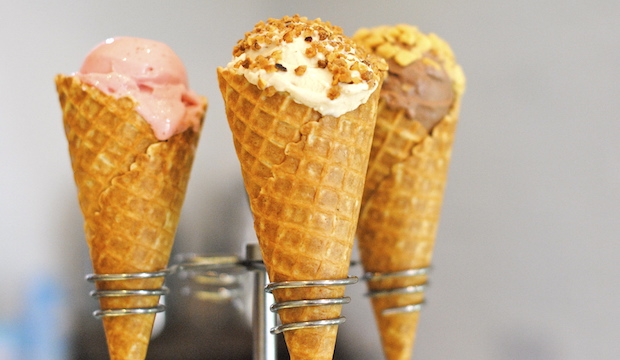 The Udderlicious ice cream is, we’re pretty sure, secretly made by wizards. Up front though, it comes from a smiley wife-and-husband duo and is an Islington institution with a tempting, pastel-coloured selection of gelatos. Bored of vanilla? Udderlicious’s flavour combinations are a foodie's delight. The strawberry and basil sorbet is like a mouthful of summer and, for all its cool creaminess, the apple crumble summons warm and cosy thoughts of home cooking. And, if you don't like what you see on the menu, play a hand in picking next month's flavours by voting for potential batches online. 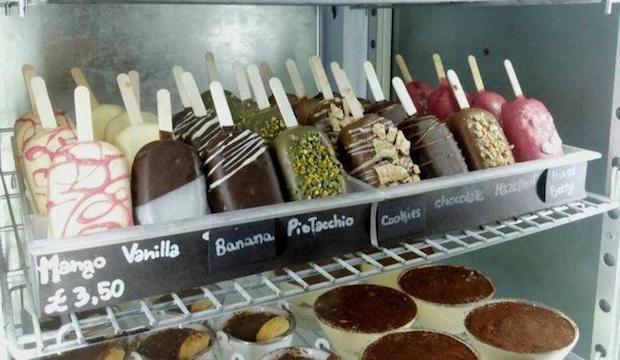 For an experience as authentic as it gets, try Gelateria 3Bis, a permanent fixture at Borough market. Ingredients such as mascarpone, pistachios, figs, liquorice ­are flown in directly from Italy and shared by the only other two 3Bis gelaterias in coastal Rimini. That batches are made on-site every morning is just one sign of the parlour’s trademark dedication to craftsmanship. And look: no wrappers! Yep, Gelateria 3Bis even has sustainability sorted. 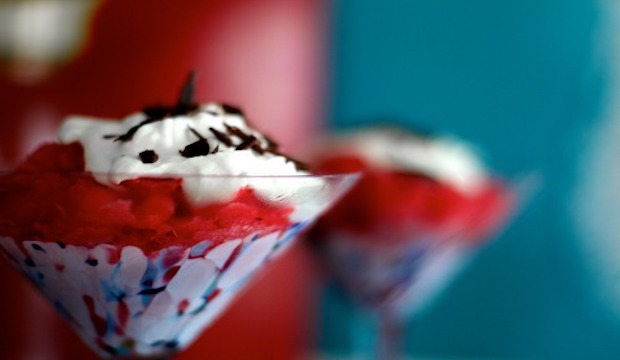 Kitty Travers’s ice cream recipes are nothing if not wholesome. Try your hand at flavours incorporating peaches, crème fraîche and tarragon, or her refreshing apricot and chamomile sorbet. 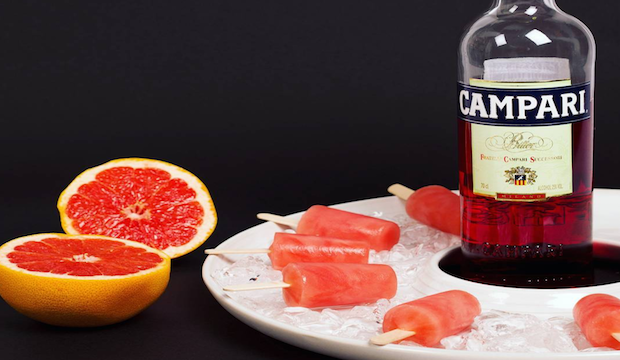 When the sun shines and the temperature rises, we find ourselves hard pressed to name anything more desirable than frozen alcoholic juice on a stick. Ice Kitchen's frozen lollies are stocked at Ocado, Harvey Nichols and Harrods, or if you want to try making your own at home, take inspiration from Ice Kitchen's book: Poptails: 50 Sensationally Intoxicating Cocktail Lollies, which is available to order now.