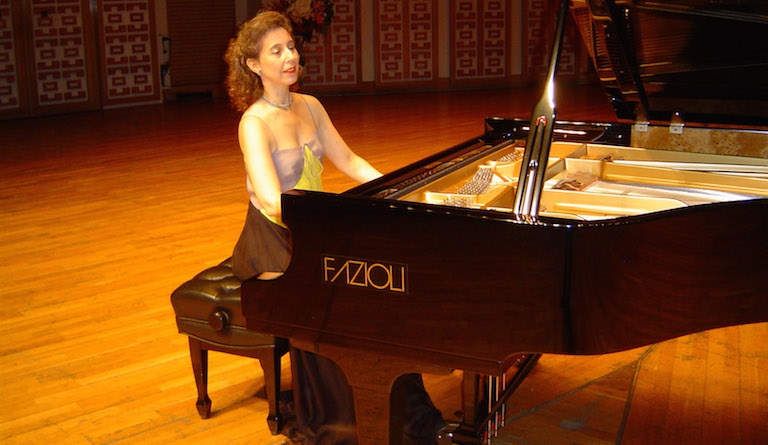 Angela Hewitt is a Fazioli fan
A true citizen of the world, pianist Angela Hewitt was born on Canada, lives in London, runs a music festival in Italy, and excels in music of many types but notably in the works of the great German kapellmeister J S Bach.

And it is with Bach that she is currently undertaking a great Odyssey, performing all the composer's major keyboard works in recitals over five years at Wigmore Hall. Her special relationship with Bach was sealed by a landmark recording of the endlessly fascinating and inventive Well-Tempered Clavier in 2008, its 24 separate pieces experimenting with every key in the chromatic scale.

Now comes an acclaimed recording of Bach's Goldberg Variations, another musical marathon, revisited 16 years after she first recorded it, and played with a new spirit born out of maturity.

At 58 she is hugely in demand as a soloist in the great concertos too, with engagements worldwide. And wherever possible, she has a travelling companion – her specially made Fazioli piano.

This stupendous instrument with four pedals – Hewitt also turns the page of her electronic musical score with her feet, dispensing with the need for a human page turner – comes from the Italian piano makers who have given the established stars in their field, Steinway and Bechstein, a real run for their money.

Set up as recently as 1981 compared with Steinway's and Bechstein's 1853, Fazioli is the brainchild of pianist and engineer Paolo Fazioli. Making only 100 or so instruments a year, Fazioli has already become a byword for superb pianism, thanks to its ringing tone. Little wonder then, perhaps, at Hewitt is at home in Italy where her annual Trasimeno Festival in Umbria attracts other world-class musicians.

To sample some of Hewitt's very special talent as a concert performer, look out for these London events. Angela Hewitt continues her Bach Odyssey with programmes 2 and 3 at Wigmore Hall (20 Jan and 10 June)

She is also the soloist in Beethoven's Piano Concerto No 4 (26 Feb) with the Vienna Tonkünstler Orchestra at Cadogan Hall, in a programme that also includes Dvorak's Symphony No 9 (From The New World). This is one of three concerts by the prestigious orchestra, who return to Cadogan Hall with Mendelssohn and Sibelius (28 Feb) and Mozart, Schubert and Brahms (2 Mar). The Viennese musicians' residency is part of the Zurich International Concert Series.

Beyond that, one of the busiest players on the circuit is sure to be back in her home city soon, and Culture Whisper will be there.