Zadie Smith's The Wife of Willesden returns to the Kiln Theatre

The debut play of northwest London's literary queen Zadie Smith returns to the Kiln Theatre for Christmas 2022, ahead of transferring to the US

Six hundred years after Medieval poet Geoffrey Chaucer wrote the Canterbury Tales, women are still not afforded the same licence for sexual promiscuity as their male counterparts. As such, Chaucer’s The Wife of Bath still feels woefully subversive today with its mouthy, middle-aged, five-times-married female narrator – and remains ripe for adaptation. Here to bring the story thoroughly up to date, reimagining the narrative in her home of northwest London, is literary sensation Zadie Smith (White Teeth, Swing Time). The author’s debut play, The Wife of Willesden has opened at the Kiln Theatre as a funny, barmy 10-hander powered by a tour-de-force performance from Clare Perkins (Emilia) as Alvita.

Smith sets the drama in Brent’s infamous Sir Colin Campbell pub, and to fully immerse audiences in this setting, director Indhu Rubasingham and designer Robert Jones have transformed the auditorium into the pub floor, with the stalls swapped for drinks tables and a well-stocked (though alas, out-of-bounds) bar framing the action from behind the stage. Up above hangs a constellation of miniature lampshades, adding to the dream-like nature of what’s initially presented to us as a night of storytelling. 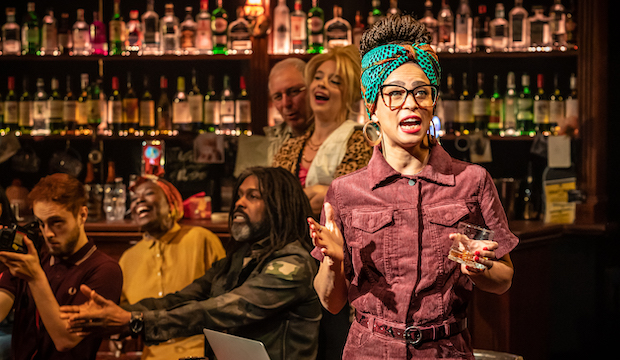 Crystal Condie in The Wife of Willesden. Photo: Marc Brenner

Smith playfully writes herself into the narrative. Sat behind her laptop and amid her characters in the pub, she self-deprecatingly presents herself as uptight, prefacing the story’s lengthy prologue with an overly apologetic spiel about her inspiration for it, before vanishing and leaving us in the hands of Chaucer’s Alyson, renamed here as Alvita, who’s ‘always ready to speak verse in metre’.

The Wife of Bath’s prologue is famously twice the length of the tale itself, with the 14th-century writer breaking dramatically from convention to allow his female protagonist to question why women were not allowed to pursue the same sexual freedoms as men. Smith’s version honours Chaucer’s original, both in format (long prologue, short tale) and subject matter. 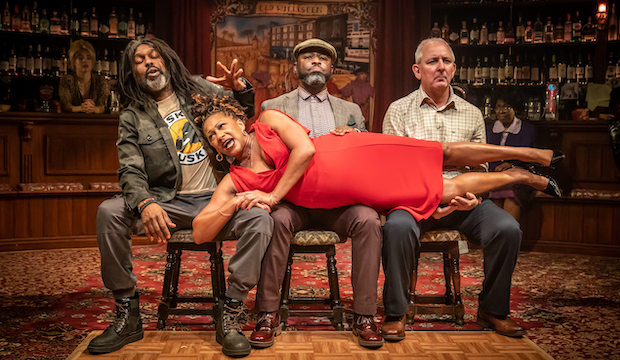 Slipping between prose and verse, the latter often taking the form of pithy rhyming couplets, Alvita reflects pensively on the lessons learned from her five husbands and bemoans attempts by the patriarch to quash her quest for pleasure. A sideline battle of the genders ensues, with the male members of the production's nine-strong chorus – who flit seamlessly between the story’s 46 characters – tutting or chipping in to defend their case, and the women rallying protectively around Alvita.

The prologue eventually gives way to the anticlimactic fairy tale itself, with Alvita bumped from the spotlight by its core band of characters: the headstrong Queen Nanny (Crystal Condie, captivating in all her minor roles), the condemned Young Maroon (a tortured Theo Solomon) who’s forced to find out the one thing all women want most, and the haggard Old Wife (a versatile Ellen Thomas) he meets along the way. It’s far less compelling than Alvita’s tales, but picks up in the final throes when our heroine makes her cheeky return.

Channelling authenticity, bawdy charm and a gruff warmth, Perkins carries the show, making us her collective confidant as we listen, transfixed, to her gritty tales. 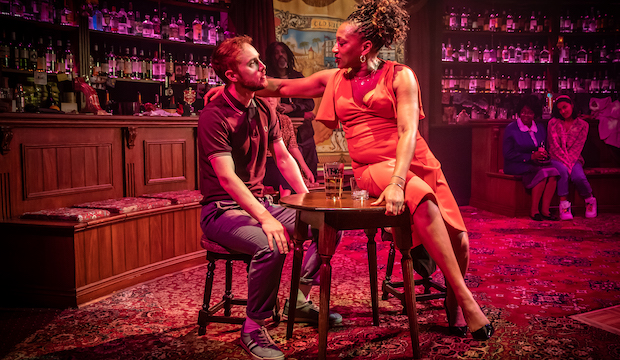 Scott Miller and Clare Perkins in The Wife of Willesden. Photo: Marc Brenner

Stylistically, it’s joyfully Brechtian and wickedly crude. Despite the budget which has allowed the auditorium to be reimagined as a pub, further props are more makeshift, with a drinks tray doubling up as a halo for token appearances from religious characters and signs brought on to shift the setting to Jamaica. Characters display an awareness of their fictionality and much of the play’s humour derives from this: in one especially funny moment, one of Alvita’s husbands realises – and protests – his being killed off. Sex acts are mimed on stage with wince-worthy montages that wouldn’t look out of place in a female-led take on Trainspotting. It's gleefully good fun.

At the heart of The Canterbury Tales was a drive to diversify storytelling and give a voice to those without power, whose stories were rarely heard. In reimagining The Wife of Bath in a community pub in present-day Brent, Smith does the same, giving a voice to women enjoying their freedoms today.