The year is 2043. It’s coming up to the 100-year anniversary of the birth of Israel and in Gaza and on the West Bank, the Fifth Intifada is brewing. Palestinians are still living under Israeli occupation. Guns are fired, rocks are thrown and the relationship between the two sides remains fraught. On a contested piece of land near the village of Beit al-Qadir, an eccentric, liberal Palestinian couple with a penchant for danger-dogging – congregating for casual sex while they hope they don’t get shot by Israeli soldiers – become our hosts and educations for the night. 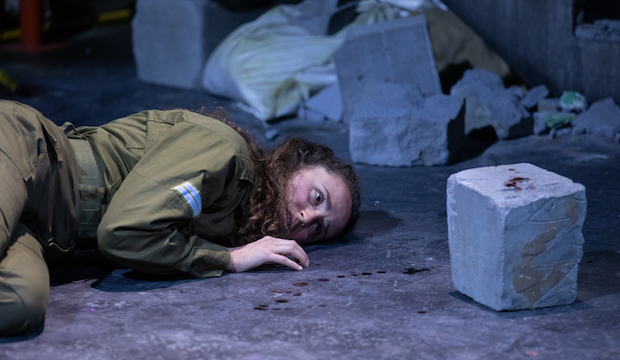 Two Palestinians begins like a variety show, with Reem (a fiery, furious Hala Omran) and her gentler, dopey husband Sayeed (an expressive Miltos Yerolemou) addressing the audience directly, inviting them to dance and play a round of ‘Bibi Says’, a variation of classroom game Simon Says, but to demonstrate the control former Prime Minister Benjamin Netanyahu had over the displaced population.

The rest of the lengthy play (just under three hours!) is split into 28 short chapters, each with its own anecdote to illustrate the cycle of eye-for-an-eye revenge killings committed by both sides in an attempt to avenge loved ones lost to the conflict.

Ibrahim makes the point that it’s not a fair war, and that protests typically result in far more Palestinian than Israeli deaths. Through the story of Reem and her son Jawad (who kills an Israeli soldier and is subsequently tortured and murdered himself), the playwright also explores the danger of glorifying martyrs, especially in the age of social media, where voicing protests can make someone a target and their death something that’s broadcast to vast numbers online.

Elerian pulls us into the play’s war zone setting, with all-encompassing design from Rajha Shakiri (set), Jackie Shemesh (lighting) and Elena Peña (sound) conjuring the torchlights of soldiers, gunshots, dizzying clouds of smoke and nerve-shattering twitchiness. The border, beyond which Palestinians cannot step, appears from time to time projected onto the stage floor by video designer Zakk Hein, furthering the intense feeling of oppression in the room. 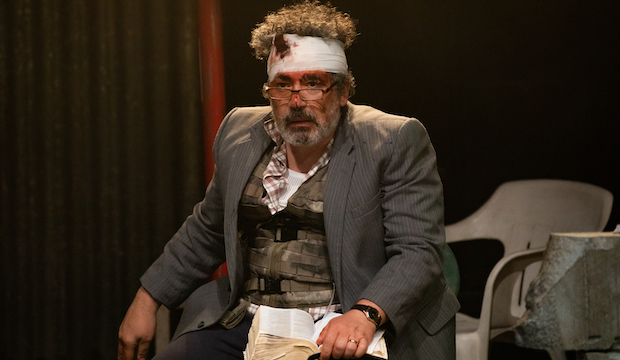 The play’s Israeli characters, a young female soldier Sara (a defiant Mai Weisz) and her father Adam (a distraught Philipp Mogilnitskiy) are also given their say, and we hear how Israelis are conscripted into the army without a choice then paid decent money to stay. Ibrahim plays devil’s advocate through the mouthpiece of Sayeed, questioning how many of us would really risk our own lives to stop and help a stranger surrounded by soldiers, and through Adam, he makes the point that it’s easy to criticise a conflict from a moral stance if you live in a country far away.

Despite its bleak subject matter, Ibrahim manages to weave dark humour through the text, such as when one character sighs: ‘Her spirit is eternal even if her body is maggots’. Rather than delivering the story in straight-up prose, his script is speckled with passages of poetry and direct conversation with the audience. The second half opens with Reem speaking directly to the six members of the audience who share her mother tongue, reprimanding the rest of us for not speaking a word of it.

Two Palestinians also pulls back in places, distancing the audience from the conflict by showing awareness of itself as a dramatised piece of fiction. Reem, in the role of narrator, controls the lighting with a click of her fingers and following a murder, instructs Jawad to smother his face in fake blood before recounting what happened. In its final moments, Ibrahim subverts the narrative entirely, having Reem read out a letter from him to her, admitting he’s unsure how to end her story.

This unveiling dials down the tension and removes us viewers from the war zone, but it doesn't detract from Two Palestinians as a worthy piece of political theatre laced with humour, anger and plenty of truth. 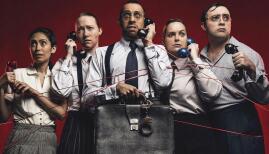 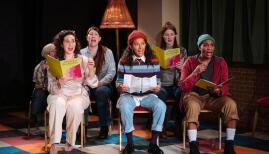