This adaptation of Erdman's The Suicide is a rambunctious, if overly-ambitious, critique of austerity Britain

1 CW reader is interested
REVIEW: The Suicide, National Theatre 3 REVIEW: The Suicide, National Theatre Lucy Brooks
Culture Whisper exclusive: £15 top tickets and more! Click here for yours
Valid on all performances, book by 25th June
There is a very good play somewhere within Suhayla E-Bushra’s adaptation of The Suicide. The performances are strong. The set design, with its leaning, brutal towerblocks, is fantastic. The direction is lively, all a-tizzy with jazz, hiphop, Grime and well-executed choreographed set-pieces. The jokes are genuinely funny, if crude. The problem with this play is that it tries to do too much, aims too high – and falls short of the mark.

Nikolai Erdman’s caustic 1932 satire, railing against Stalin and the communist state, has been relocated to Fulham’s notorious Clement Attlee estate. Scrimping on benefits, cooped up in a small flat with his girlfriend and her mum, Sam is feeling hopeless. But, as he considers ending it all, his intended suicide becomes public property. 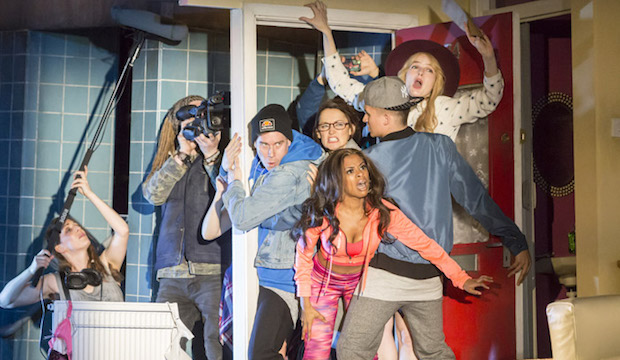 A pack of wolves descend on Sam, each a clichéd representative of some modern tribe, and each with their own agenda. We have the beleaguered social worker (“you could shame the council”), the trustafarian film-maker and gap-yah disaster (“every revolution needs a spark, you could be like that Tunisian street-vendor who set himself on fire and started the Arab Spring”). We have a whiteboy rapper, hoping for a MOBO, a Stoke Newington-dwelling public school girl who owns a biodynamic café and wants to serve Sam his last meal, an ex who wants to be famous, a local MP who wants to further his political agenda, and a gaggle of school truants armed with iPhones.

Suicide is the leading cause of death in British men under 50, particularly in poorer areas. It’s a serious issue, which this play tackles with humour. Making light of mental illness isn’t the problem here: in fact, it’s refreshing to see societal ills blackly poked fun at, compared with, say, Iphigenia in Splott, which was mercilessly bleak. The problem is that the play is too broad, and the lack of focus kills the caustic satirical bite that mad Erdman’s original version such a thrilling ride. There is no characterisation, merely caricatures. We lose sight of who or what is being attacked.

Nevertheless, we’re glad that the Lyttleton Stage was bold enough to stage The Suicide, which is the kind of play usually put on in the National’s fringier Temporary Theatre.