X is a tender, chilling and astoundingly human story about space by Alistair McDowall, playwright of the moment

In playwright Ali McDowall’s dystopian near future a crew of astronauts are waiting to be picked up from a research mission on Pluto. Tipped askew at an angle, the stage frames everything with disorientation.

Though the setting is pure science fiction, the action is utterly pedestrian: bouncing a ball over and over again, anxiety eating, playing board games. At first characters feel clichéd and their dialogue is flat – and therein lies the brilliance.

The otherness starts subtly with offhand remarks about a ravaged earth and the blonde Americans colonising Mars. People are tempted to Pluto for tax benefits. But the wry comedy and the playful take on sci fi conventions spirals into tension.

Vice Captain Gilda, played deftly by Jessica Raine, is increasingly overwrought with the fear that nobody will come. Reality and rationality begin to splinter. The first half ends with heart-hammering, horror movie intensity. 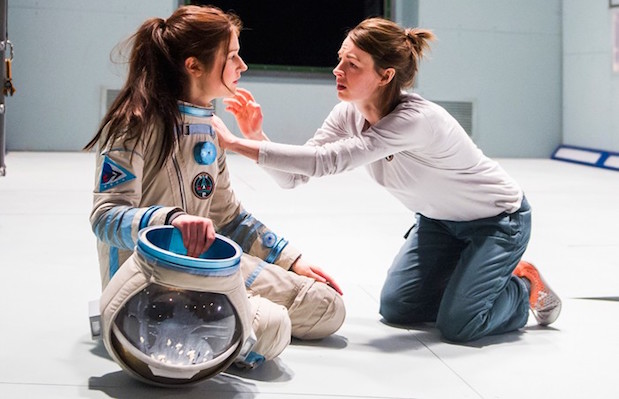 Then, like a black hole, the story sucks you in leaves you discombobulated and defenceless. The titular 'X', that unknown value, is first an algebraic symbol to track time when all the clocks break. In the constant darkness of Pluto, all measure of time is lost.

Then ‘X’ is a mind-boggling enactment of uncertainty. Dialogue loses identity and those hollow remarks gain new significance with each repetition. All absolute values are eroded.

The intelligence of McDowall’s writing is astounding, and it’s complimented by a bold, brave production. Under Vicky Featherstone’s direction X pushes the limits of what audiences can endure. One particular scene is an assault on the senses. But there’s enough narrative momentum to keep you hooked.

It's far from an easy, pleasant watch. X challenges the nature of performance and story-telling, undermining assumptions. But what’s so striking is the tender, chilling way in which McDowall animates the very nature of lucidity, memory and meaning. It's clever enough to leave you reeling, without veering into abstraction and alienating audiences.

Click here to read our interview with Ali McDowall