Trouble in Mind, Alice Childress's cutting satire of racism in 1950s America, proves a play for the here and now in the National Theatre's engaging production

Review: Trouble in Mind, Dorfman Theatre 4 Review: Trouble in Mind, Dorfman Theatre Teresa Guerreiro
Trouble in Mind is that rare thing: a complex, nuanced play about racism, cogent, not strident, and no less hard-hitting for that. It is also very funny, though every joke is like the sharpest of darts that never fails to hit the bullseye. And although it was written well over half a century ago on the other side of the world, it is very much a play for the here and now.

Using the established device of a play within a play, African American playwright Alice Childress takes us to a rehearsal room in 1950s New York, where work is under way on a play to be performed on Broadway. The cast is mixed, with four black actors, two white, and a white production team.

The director Al Manners (Rory Keenan) is on the surface a liberal man, who appears chummy towards his actors – 'call me Al' – but is never less than patronising; and he treats his white inferiors, assistant director Eddie Fenton (Joe Bannister) and theatre odd-jobs man Henry (Gary Lilburn), with irascible scorn. 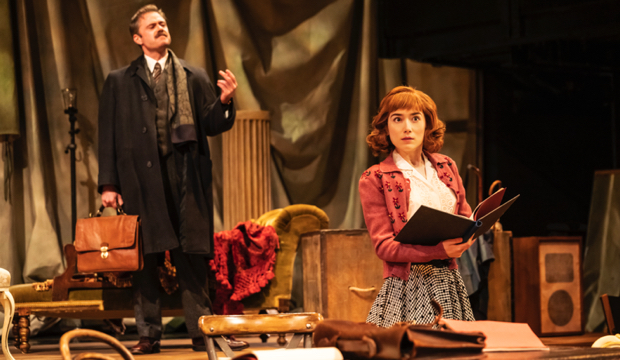 Rory Keenan and Emma Canning in Trouble in Mind. Photo: Johan Persson
The black cast of Trouble in Mind have a complicated task: they have to act in the play we’re watching, as well as in the play within the play; but more importantly they also have to embody the characters expected of them as black actors dealing with a white director.

In the play within the play they are meant to obey the stereotypes of ill-educated, subservient house servants, at the mercy of their white masters, the whole plot culminating in a lynching. In the rehearsal room, though, they enact a modern-day version of that subservience: always laugh uproariously at the director’s feeble jokes and always obey his commands.

In this behaviour they are instructed by the lead actress Wiletta Mayer, a superlative, multi-faceted turn by Tanya Moodie. In an affecting scene, she dreamily confides in the kindly Henry: ‘I want to be an actress,’ a real actress, not confined to clichéd parts defined by white people’s expectations of her race.

Wiletta’s African American colleagues are: Sheldon Forrester, played very effectively as an older black man who knows his place by Cyril Nri; Millie Davies, nicely portrayed by Naana Agyei-Ampadu as a younger woman with delusions of stardom; and the newbie John Nevins, an assured professional debut by Daniel Adeosun.

Their white colleagues are Judy Sears (Emma Canning), a hammy young actress trying hard not to be racist, but prone to offensive gaffes, and Bill O’Wray (John Hollingworth), an older actor who feels uncomfortable socialising with black people.

The precarious balance of the increasingly fraught rehearsals explodes in spectacular fashion when Wiletta challenges the racist implausibility of the plot and the truth of each character emerges in a chilling final scene.

Successful playwright that she was, Alice Childress’s dream of having a play on Broadway never came to pass. Trouble in Mind was optioned after its 1955 off-Broadway premiere, but in an ironic reflection of the play’s theme, the producers demanded changes to make it more palatable to white audiences, and she refused.

Childress died in 1994; almost two decades later, Trouble in Mind has now opened on Broadway to general acclaim; and this simultaneous production at the National Theatre, skilfully directed by Nancy Medina, does this remarkable play full justice.