But the original Breakfast at Tiffany’s is much murkier than its shimmering 60s big screen immortalization.

In Truman Capote’s novella, adapted for the stage by playwright Richard Greenberg, it takes much more than a croissant outside a jewellers to save Holiday Golightly from her 'mean reds'.

Stripped of the film’s lightness and charm, this self-consciously strained adaptation comes to the stage with a thud. In the place of atmosphere, there is narration, faithfully retained from Capote’s prose. The result is wordy and flat, with an unshakeable whiff of contrivance overshadowing the emotional arc.

The book, like many, is really about its writer. In this case a naïve young “Fred”, played with affable excitability by Matt Barber. Upon moving to New York his aspirations of authorial greatness are buoyed by an obsession with his glamorous neighbour.

Despite the best efforts of Pixie Lott, Holly Golightly never graduates from literary creation to a vivid character on stage. This is a limitation of the script: its heroine is a vehicle upon which Fred (and other male characters) can impose romance, heroism or spontaneity. 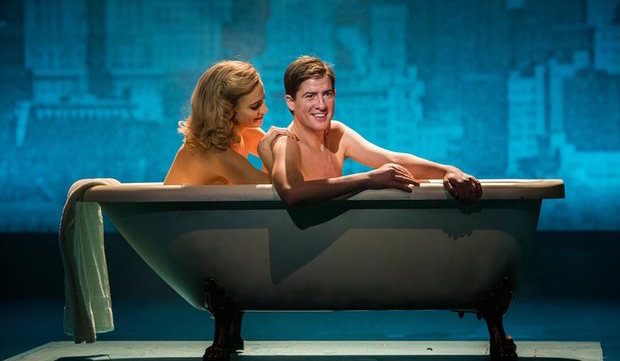 Brought to bubbly, blonde life by pop star Pixie Lott, Holly Golightly on stage is a simpering whirl of dark glasses, dubious cash transactions and ‘daaaaahlings’. The fizzy frivolity grates but that’s the point. You are never seduced into deifying Holly as a society sweetheart because it’s too easy to see through it.

Lott captures this inherent artifice and is at her best when hinting at Holly's brittle core. But, even at her most desperately vulnerable, this version of Holly always feels like a performance. Most painfully so in the overworked version of Moon River.

Polished, musically accomplished (and released as a single on itunes), Pixie Lott’s 'Moon River' is an anthem in its own right. The trilling vocals wouldn’t be out of place on American Idol.

But the showy take on a snatched private moment does little to humanise an already hollow Holly Golightly.