Show tunes, ballet and romance blend in this sumptuous stage version of classic MGM musical An American in Paris

Best known as an Oscar-winning MGM film, with Gene Kelly and Leslie Caron, the Gershwin brothers' musical is a sumptuous love story, where song and dance come together like a pas de deux. Now, with direction and choreography by Royal Ballet artistic associate Christopher Wheeldon, it is a dreamy stage musical, which arrives in London after impressing in Paris and New York.

Bob Crowley’s set imbues a sense of art from the outset, rendering Paris in the style of an Impressionist painting, with occasional pops of Matisse and Picasso primary colours. Realism is out. Instead we have a stylised, seductive and occasionally surreal stage world, replete with the kind of grace and glamour that makes you want to quit your job and take up beginners' ballet lessons. It's the same aesthetic that La La Land channelled to irresistible effect.

With a songwriter, a singer, an artist and a ballerina, all pursuing love and creativity in post-war Paris, the story is steeped in charm.

Plucky GI Jerry (Robert Fairchild, principal dancer with the New York City Ballet) is lured by Left Bank life and dreams of making it as a painter. Wry, red-cheeked Adam is living out his song-writing aspirations in various bohemian cafes. And straight-laced Henri (Haydn Oakley) is preparing to forgo his hefty family fortune and become a nightclub singer. All three are in love with gamine, glossy-haired ballerina Lise (The Royal Ballet's Leanne Cope).

While classic songs – S’Wonderful, I Got Rhythm, Stairway to Paradise – are performed with elan, it is dance that carries the emotional weight of the story. Elegance dominates: every scene change comes with a twirl and pointed toe, and encounters are at their most compelling in Wheeldon’s large-scale ballet numbers. 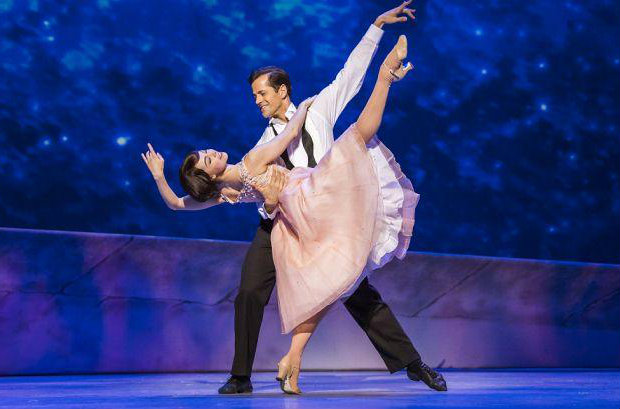 Robert Fairchild and Leanne Cope as Jerry and Lise

Together, Fairchild and Cope are formidable leads – acting and singing to rigorous West End standards, while on pointe or pirouetting across the stage. As enigmatic Lise, Cope conveys the trepidation beneath her insouciance through movement, while Fairchild captures all Jerry’s chipper charisma with a long-limbed lightness. The show-stopping finale comes in the form of the mammoth meta-theatrical ballet performance – a pinnacle of the protagonists' creative achievements as well as the moment of romantic resolution.

But the real happy ending isn't to do with true love. It comes in a moment of epiphany from overlooked songwriter Adam: art doesn't have to be dismal and dreary; it can exist just to make life a little brighter. This new musical does exactly that.

An American in Paris, Dominion Theatre