Like all good mysteries, it all starts with a wrong number. Quinn, the fraught writer-protagonist, answers the phone and delves into a case not unlike the ones he writes under a pseudonym. As the mystery erodes and disrupts Quinn’s life and the city around him, Macmillan’s adaptation faithfully transitions from what seems a straightforward crime thriller to an existentialist and even absurdist reflection on identity.
Even with a static stage, Lysander Ashton’s video designs immaculately transform Quinn’s apartment into the Stillman home and other spaces with such immediacy, brilliantly highlighting the dislocation felt by Quinn himself. The most inventive and compelling moment is a climactic tour of the New York streets, with Quinn dead centre in the middle of it. So strong, this moment perhaps overshadows the rest of the story. 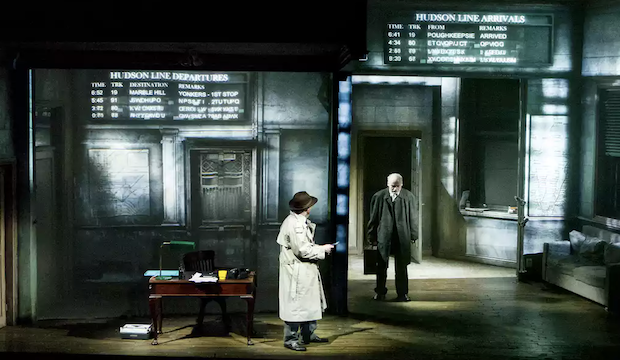 Mark Edel-Hunt and Chris New split the role of Quinn, cleverly churning up Auster’s themes of identity while also enabling speedy transitions and a bending of time. And while the cast is impressive for the sheer number of roles they inhabit and do so with commendable dexterity and style, they are limited by the script.

Macmillan chooses to frame the crime thriller with a narrator who speaks directly to the audience and ostensibly governs the visual action on stage. It feels however a little too much like reading a book. It’s a distancing device that not only removes a human dimension to Quinn, but that seems to trap the story itself. The characters remain flat, and there is no real dramatic intrigue.

Without much chance of providing pathos, the actors and the visualisations become more of an accompaniment to the thriller than integral to it. Although City of Glass is a remarkable and complex visual production, it does not demonstrate why Auster’s novel need adapting for the stage.