3 CW readers are interested
My Neighbour Totoro, Barbican Theatre review 5 My Neighbour Totoro, Barbican Theatre review Holly CW
Adapting a beloved family film for the stage is a weighty task bearing the potential for disappointment. Fortunately, composer Joe Hisaishi, adaptor Tom Morton-Smith and director Phelim McDermott’s reimagining of Japanese anime My Neighbour Totoro for the RSC gets it spot on, bringing the story to life through a flurry of lovable puppets, energetic leads and a grinning awareness of itself as a piece of magical realism. Running at the Barbican Theatre until late January, this utterly charming production is the family show of the season – worth booking while the odd cluster of seats remain available.

CLICK HERE TO BOOK
Based on Studio Ghibli’s 1988 film of the same name – written and directed by Hayao Miyazaki, with a score by the aforementioned Hisaishi – it tells the story of young sisters Satsuki and Mei, who move from Tokyo to the Japanese countryside with their father Tatsuo to be closer to the hospital where their mother Yasuko is being treated for a serious illness. As the girls explore their new surroundings, folkloric spirits begin to reveal themselves: creatures cute and curious, including the titular Totoro, a bulbous, cuddly tree spirit with a grin and a booming roar, who’s visible only to the children. 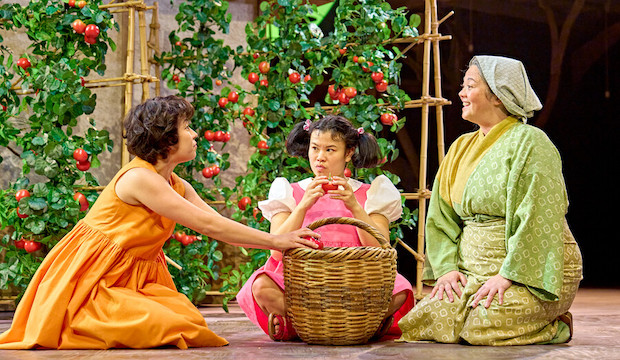 In the RSC’s production, adult actors Ami Okumura Jones and Mei Mac play a precocious Satsuki and cheeky Mei respectively, morphing into the giddy girls and infusing this story with terrific energy. But it’s designer Tom Pye’s set coupled with Basil Twist’s puppetry that bring the magic, making Totoro a spectacle of visual beauty lit with freeze-frame moments both reminiscent of the movie and picturesque in their own right.

There’s the familiar bus stop scene where the two girls shelter from the rain, dwarfed by their red umbrella, with Totoro looming next to them. But in moments more impressive on stage than screen we see the family's wooden house appear to rain acorns and paddy fields slide across the stage on skis. 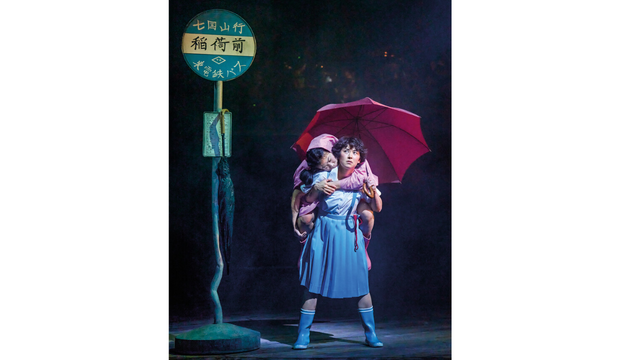 Puppet master Twist shows off just how versatile his medium can be, presenting the story’s creatures in a range of different forms. Soot sprites shimmy on the ends of sticks, 2D cutouts of the characters swing their legs from the branches of a tree, an inflatable Catbus glows from within as it flies across the stage, and the Totoro appears as an impressive, wobbly thing of epic proportions, with fur that wouldn't look out of place on the end of a mop.

The story’s magical realism is etched into every fibre of the show, but the team are keen to celebrate, rather than conceal, the craftsmanship that has gone into it. In one scene, a screen rises to reveal the gaggle of puppeteers, black-clad and veiled, hovering comically behind it. In another, the bus driver walks out of time with his bus, to chuckles from the audience. 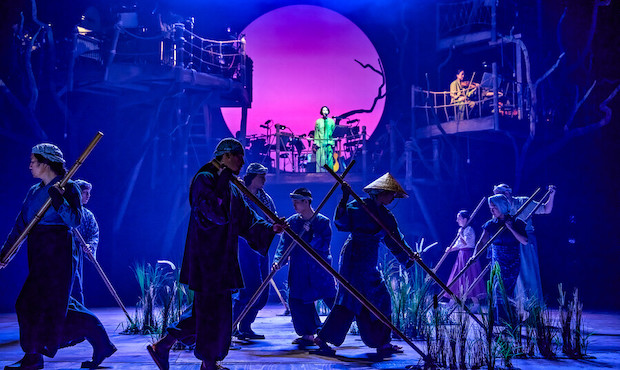 While not a carbon copy of the film’s, Hisaishi’s score is a strong throughline connecting the two, with several of the movie’s memorable songs performed by a band nestled in treehouses above the stage, fronted by the singer Ai Ninomiya.

Totoro is dark for a family show. One scene leans into the story’s serious side a bit too heavily for little audience members, with the chorus of villagers searching a pond for the missing Mei. For the most part, the RSC gets it right, avoiding glossing over the mother’s illness that shadows the minds of this brave family.

While matters aren’t wrapped up in a simple, happy ending, Totoro leaves us with a heart-warming feeling of hope and an admiration for the power of imagination that can carry children through all kinds of hardships. Here on stage, it’s also a joyous showcase of theatre magic at its best.