The return of Mark Rylance: Nice Fish comes to London and promises free tickets for people dressed up as fish

Erik (Jim Lichtscheidl) and Ron (Rylance) spend the long, cold Minnesota hours far from the nearby town -- wonderfully realised by set designer Todd Rosenthal and puppeteer Mohsen Nouri) -- waiting to catch a big fish on the thick ice. When Ron hilariously drops his phone in the ice hole, the connection to the outside world is completely cut. Their meandering speeches paint a picture of idleness as they meditate on just about everything.

Rylance’s Ron is earnest and equally clueless, while Lichtsheidl’s Erik is understated and introverted. Rylance is admittedly spectacular and shows off his incredible physicality and comedic timing. But it’s the subtle bond created between the two of them that is most impressive. Even amongst their absurdist ramblings, they establish a real and nuanced relationship that sits just below the ice and really warms the heart.

Nouri’s puppeteering remains mesmerising as he introduces Flo, later played by Kayli Carter, on to the icy floes. As night moves in and more characters join them, the pace begins to stagnate a little. The medley of other characters is slightly distracting but is salvaged by a beautiful musical interlude. The speeches become more existential and more moving, and with a fairy-lit tree on the side of the stage, it starts to resemble Waiting for Godot in technicolour.

Nice Fish is a refreshing production that entertains, enlightens, and enchants. It’s also a production that laughs with itself -- free tickets are given out to those who show up in fish-inspired costumes. It’s that sort of joie de vivre and that attention to detail, that makes Nice Fish stand out as an off-centre but delightful addition to the West End.

As a way to reel in the crowds for its UK premiere run in London, Nice Fish invites prospective audience members to get crafty:

'Free tickets in private boxes will be available every night to audience members dressed as fish or fishermen' (and presumably fisherwomen too), promises the press release.

Guidance on how to resemble a fish is sparse, so let your imagination run free. There are only four free fancy dress seats available per performance: let's hope there isn't a whole shoal of costumes… The West End could be awash with disconsolate ticketless cods and guppies with no plaice to go.

The theatre front of house job have the task of awarding the Reel Deel free tickets according to who they deem to have the best costumes.
We hope the show can compete with the inevitably comic display of aquatic fancy dress that's set to take place in the foyer. 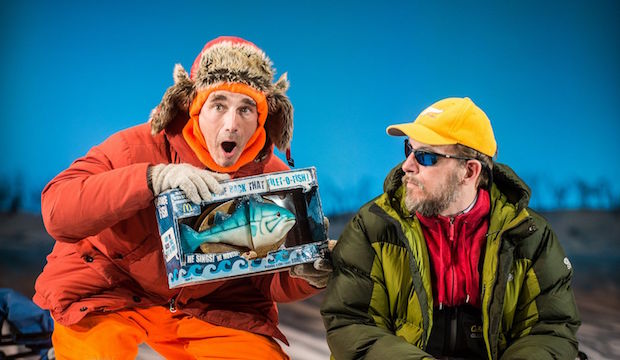