Andrew Scott captivates in Robert Icke's sleek, minimalist Hamlet, transferring to the West End after a sell-out run at the Almeida

TRY CULTURE WHISPER
Receive free tickets & insider tips to unlock the best of London — direct to your inbox
Andrew Scott, who will reprise his role as Hamlet, says of the transfer: 'We have been overwhelmed with the reaction to our interpretation of Hamlet and I'm so happy that we can share it with a larger audience. This is a play full of heart, compassion and humanity. I'm so happy that we are able to offer 300 tickets for under £30 to every performance in the West End run to allow everybody a chance to see the play.'

Tickets for Hamlet at the Harold Pinter Theatre go on sale Thursday 6 April. Click here to sign up for priority booking.

Robert Icke seems almost unstoppable. Associate Director of the Almeida, his recent shows include warmly received Mary Stuart and Uncle Vanya at the Almeida, The Red Barn at the National, and, of course, the explosive Oresteia, for which he won the 2016 Olivier award for best director. Now tackling the Bard with Sherlock’s Andrew Scott as the Prince, his highly anticipated Hamlet is elegant and modern. With all the trimmings of an Icke adaptation – sleek, minimalist set, film and technology, pop music – this Hamlet is captivating, with Scott a highlight on an already lustrous stage. 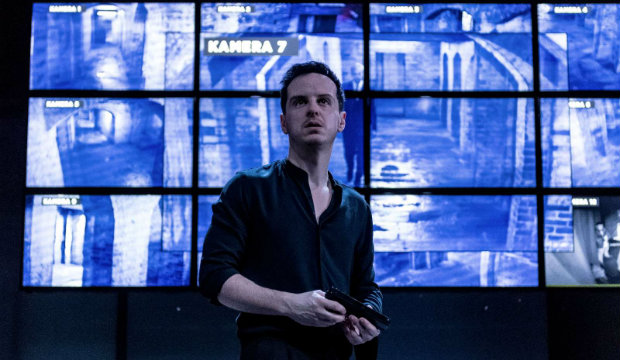 A large screen made up smaller monitors hangs above the security room surveilling the rooms of Elsinore. Hamlet’s ghost appears in one of them, a smart and unsettling choice. Casting technology as the harbinger of the supernatural, Icke instils a lingering distrust of being constantly watched or overheard. Peter Wright’s superb Polonius, a bumbling but endearing old man with waves of dementia, naively wears a microphone in his encounter with the Prince, while a close-up camera betrays Claudius’s reaction to The Mousetrap. Fortinbras’s presence literally hangs over them as a newsreel that can be turned off but cannot be forgotten.

Wright’s Claudius, a tactful but stony politician, is notably bad at technology, and requires Reynaldo (David Rabin) to switch on his Skype call with Norway. This small detail exemplifies Icke’s gift for storytelling. A master at finding contemporary counterparts for classic characters, he teases them into the present with simple but revealing details. While Rosencrantz (Calum Finlay) and Guildenstern (Amaka Okafor) may not provide their usual comic relief, their intimacy with Hamlet as old university friends – and perhaps more – reinvigorates the relationship between them and the betrayal that ensues.

Surrounded by Hildegard Bechtler’s brilliantly chic apartment (though very reminiscent of Oresteia, with glass doors dividing the stage), Scott’s Hamlet is able to probe our modern-day anxieties, twisting them as he twists his hands. Sharp, unpredictable yet deeply endearing, Scott focuses on the heart of Hamlet in deep grief over his father's death. And with that comes a nostalgia for more peaceful times, mirrored in the smatterings of Bob Dylan folk tunes wafting throughout the play. Juliet Stevenson as Gertrude is also exceptional as a politician's wife who genuinely loves her child yet constantly fails to protect him.

Only the choice to have Hamlet be present for Claudius’s confession is perplexing. While it slightly undermines the narrative of the following scenes, Icke’s slow but deliberate pacing and stirring imagery quickly bring back the pressurised atmosphere of this deeply rotten but troublingly familiar state.

This Hamlet is most certainly an Icke production, and that is certainly no bad thing (although be prepared for an almost four-hour long evening). With Scott leading the way, Hamlet at the Almeida is mesmerising and arresting.

Breaking Bad's Bryan Cranston to star at the National Theatre
Sign up to CW’s newsletter
By entering my email I agree to the CultureWhisper Privacy Policy (we won`t share data & you can unsubscribe anytime).