As part of the nationwide Shakespeare400 celebration, this revival emphasises the bard's enduring significance with a narrative that is as pertinent now as it was back in 1599.

And while the open air staging interacts with Elizabeth tradition, we get much more than history from this production of the history play. In keeping with the rise of gender blind casting, Olivier-winning actress Michelle Terry plays the titular King Henry V with fierce stage presence, as the great warrior and leader of the 'band of brothers'. Though, unlike the Donmar's fêted all female production of Henry IV, this Shakespeare revival includes a cast of both men and women, including Ben Wiggins as Princess Katherine. 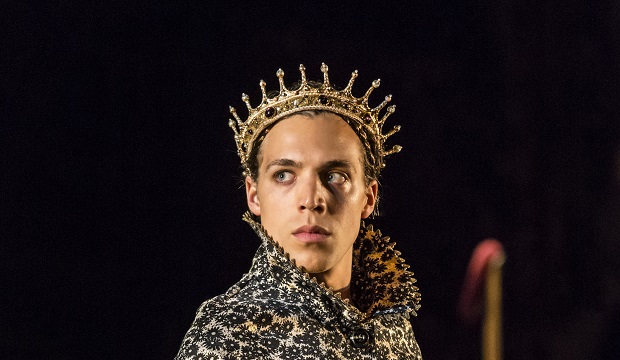 Both are very good. Terry's diminutive stature contrasts with that of her men but her voice is powerful and resonant. She is matched in quality by Charlotte Cornwell as the Chorus, who watches over the proceedings and sets each scene for the audience.

On a warm summer's evening there's no better place to be than a theatre tucked in the middle of leafy Regent's Park. Right now, the roses and lupins are out and the recent rain means the park is green and lovely. Step into the theatre and fairy lights peek through wattle fences. A relaxing way to start the entertainment. However, as fans of the play will know, this is one of Shakespeare's most rousing stories.

After provocation from the Dauphin (in this production he sends a large trunk of grotty-looking tennis balls), Henry V takes the men to France and starts a bloody campaign. The play itself addresses modern warfare and shows that there is no glory in battle. The sparse staging, awash with smoke, becomes the battlefield of Harfleur and Agincourt. Though the production is mostly played in modern dress with cloaks and other props (a crown, a tiara) to identify the characters, the battle scenes are played out in military fatigues: this is a production that takes war, its cost and consequences, seriously.

This, according to the director, was a deliberate move:
“This summer we’re expecting the results of a MOD consultation that aims to put female soldiers on the front line of combat, as well as the publication at last of the Chilcott report into why our country goes to war, and who we trust to take us there," says director Robert Hastie.

After the referendum the play takes on new meaning. Looking at some of the last lines of the text:
That they lost France and made his England bleed
The final scene is moving and feels incredibly current. There's no better time to think about our relationship with our neighbours.

This story of English victory against France at the battle of Agincourt opened the day before the EU referendum. "I can’t think of a better time to stage this play about England’s relationship with its European neighbours," Hastie adds. He's sadly right.