Punk comes to the stage in an adaptation of Derek Jarman's seminal film, Jubilee

Manchester's Royal Exchange, the Lyric Hammersmith and Chris Good & Company collaborate to bring the film to the stage. Playwright Chris Goode reworks the screenplay into a stage version set in present day. The script is updated continually throughout the run to ensure it stays fresh.

Nodding to Brexit, Grenfell, fake news, Kevin Spacey and the NHS, Jubilee 2018 is a #nofuture cry for the millennial age. This is Britain today - chewed up and spat out in a series of (increasingly anarchic) vignettes. With match lit and flag raised, Goode is starting a riot and he’s asking us all to get angry.

From the royal box, the time-travelling Queen Elizabeth I (Toyah Willcox, who played pyromaniac teenager Mad in the the original film 40 years ago) lords over proceedings like a dutiful monarch at the Royal Variety Show - and make no mistake, Jubilee is as perfectly random as the Royal Variety. It wilfully defies all theatrical convention, addressing the audience and breaking the wall to provide a sneering commentary on its own construction. 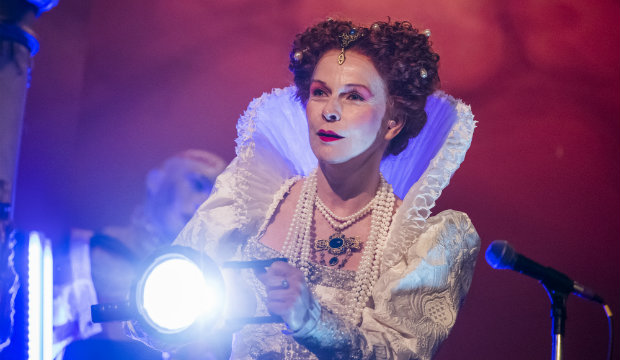 Toyah Willcox (Queen Elizabeth I) in Jubilee at Lyric Hammersmith

Amyl Nitrate (Travis Alabanza) and gang run amok setting fire to prams and flinging around mattresses. At times, the chaos pauses for Alabanza to deliver impassioned monologues about race, gender, inequality and the con of zeitgeisty fads like mindfulness.

It’s in these quieter moments that the dialogue is at its best - taut, pointedly comical - mirroring all the nihilism and angst of 80s punk rebellion. Alabanza is undoubtedly the play’s Crown Jewel – delivering a poignant reflection on the Trans community, who are extolled in the media but marginalised by the milieu, with both gentleness and urgency.

Rose Wardlaw also resurrects the ‘sexually positive‘ and strangely empathetic Crabs with much aplomb. Careening skilfully from childlike neediness to softer introspection, she is a glittering find amidst the madness. In the wake of the ‘Me Too’ movement her spikey interchange about power and sexuality with Cop Number Two has particular currency.

Jubilee won’t be for everyone, but behind the pearls, punch-ups and notably high penis count (this is not one for prudes) is a desire to break down the patriarchal, hetero-normative and divisive conventions that govern modern society.

Go bask in its bonkersness because if we’re going up in flames, this is the way to do it.