Ian Rickson directs a faithful, relatively safe revival, which no doubt draws on on his own experience working alongside Pinter. The setting – all dark mahogany and peeling wallpaper – is firmly in the late 50s and the performances honour the peculiar pauses, escalations and disintegrations of the writing.

So it’s a testament to Pinter’s audacity that more than half a century later, without any impetus to update or repinterpet, The Birthday Party still feels so exhilarating and unsettling.

It’s difficult, strange, and inherently unsatisfying for those seeking resolution or reason (indeed the play was so unpopular when it premiered in 1958, Pinter's career nearly halted before it began). Establishing the form that made Pinter into a figurehead of postmodernism, The Birthday combines banality and brutality. 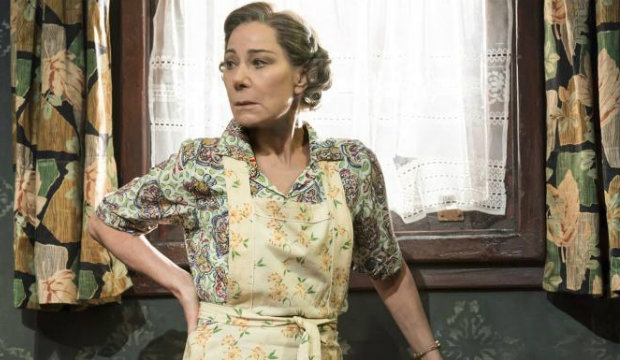 Meg, played with a comic credulity by Zoë Wanamaker, runs a shabby seaside guesthouse with her deckchair-attendant husband Petey (Peter Wright). Toby Jones gives a compelling portrait of humdrum petulance as their indulged only guest, Stanley.

As Meg mixes maternal indulgence with coquettish flirtation, the ordinary slips into absurdity and uncertainty. Then, when a pair of sinister strangers arrive and the titular birthday party begins, domesticity gives way to power struggles and disquieting horror.

Stephen Mangan is magnificent as Goldberg, emphasising the melody of Pinter’s language with growling, booming effusiveness and making us squirm by simply sticking out his tongue. Together with oily, twitchy sidekick McCann, (Tom Vaughan-Lawlor) he draws us into a coil of comedy, dread and violence. 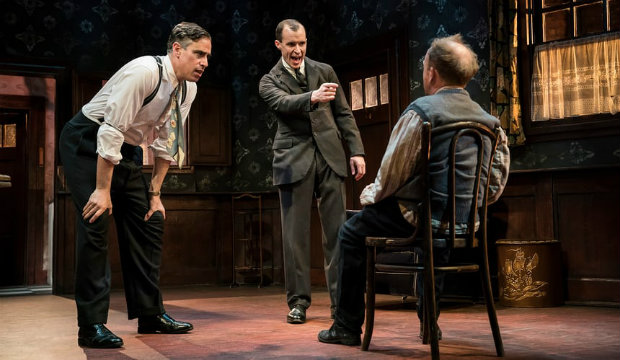 The performances are every bit as impressive as you’d expect from a cast of this calibre. But it’s the villain/victim dynamic that feels most electrifying. Stephen Mangan, Tom Vaughan-Lawlor and Toby Jones make the troubling patterns of dominance and subservience spark. And there’s an uncomfortable flash of contemporary relevance in Pearl Mackie’s portrayal of Lulu, the bright young party guest, left broken in the midst of this masculine power struggle.

More could have been made of such contemporary echoes to really make Pinter veterans feel the terror afresh. But with Ian Rickson's expert handling of the language and such a fine cast of actors, this faithful revival of The Birthday Party gives us more than enough to celebrate.