Jews. In Their Own Words., Royal Court Theatre review ★★★★★

1 CW reader is interested
Jews. In Their Own Words., Royal Court Theatre review 3 Jews. In Their Own Words., Royal Court Theatre review Holly CW
The Royal Court wanted to atone for their sins after their very public bout of anti-Semitism regarding the name ‘Hershel Fink’ in the production Rare Earth Mettle in November 2021. For context, the fictional character Hershel Fink was a CEO tech billionaire: manipulative, selfish, voracious for money above all else. The name was leaked and hastily changed to Henry Finn before press night. The British media (both social and publication) went into a feeding frenzy, justifiably so, although the play itself never touched on Jewish issues or the protagonist’s origin story. It was all about the name and its anti-Semitic connotations.

So, ten months after this debacle, on the very same stage, the Royal Court premieres Jews. In Their Own Words. by eminent Guardian columnist and author Jonathan Freedland. You might be thinking this isn’t enough time to give a nuanced theatrical response to what happened. You would be right.

The show starts with – would you believe it – a character named Hershel Fink, dressed in a loin cloth, looking up at a theatrical parting of the clouds, where a disembodied Godlike voice emanates. Hershel has to find out who his people are. Who he is. This goes nowhere. We never meet this character again. 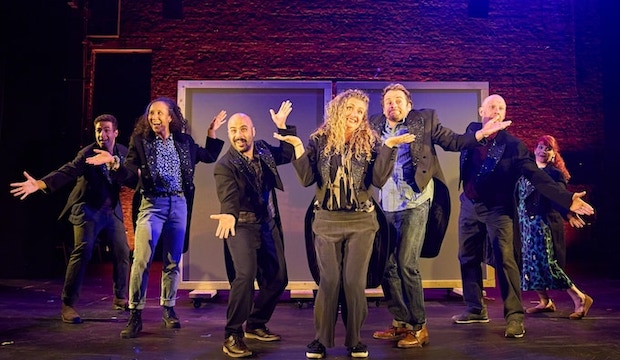 Next comes the play proper, a verbatim piece focussing on twelve contemporary British Jews. Some are well known, like Margaret Hodge, Labour MP for Barking, Man Booker prize winner Howard Jacobson, actor Tracy-Ann Oberman (who in fact came up with the idea for the show), mixed alongside ordinary folk like decorator Phillip Abrahams, and social worker Victoria Hart. Each give personal accounts on the everyday antisemitism they experience, that their families have experienced, and what it’s like growing up in the UK as a Jew.

The best moments are when these people are given the spotlight to tell their stories: being told by parents to always have a suitcase packed just in case; that Jews are to blame for the coronavirus; the paradox of not looking Jew enough, or looking too Jewish; the inherent misogyny baked into antisemitism; the Jewish coding of Dracula; the raging antisemitism on the left. The headliners of ‘Money’, ‘Blood Libel’ and ‘Power’ are inked in red across the back wall to act as chapter headings to explore prejudices passed down through the generations against Jews.

But there are big problems with the show. The staging from Royal Court artistic director Vicky Featherstone and co-director Audrey Sheffield is clunky and crude. There is no dramatic through-line. While Freedland is an exceptional journalist, he has not yet learnt the skills to be an exceptional dramatist. This is his first play, and it shows. It feels calculated that the Royal Court would give this opportunity to a celebrated political commentator instead of offering it to a Jewish playwright, emphasis on the word ‘playwright’. The cast do their best with the material, offering some light and shade, but there are no startling moments or star players.

The play is littered with cringeworthy moments that have nothing to do with the verbatim element of the piece: an ironic Vaudevillian number ‘It was the Jews that Did It’ that blames Jews for everything; pantomimes of Medieval mystery plays where the ensemble mime Jews killing ‘saintly’ children, drinking their blood, and being hanged by Christians for doing so. Of course, all this is to underline the horrendous absurdity of centuries’ long prejudices against the Jews, but the execution is amateurish, and at times embarrassing to watch.

Overall, this feels like a missed opportunity. With more time and development, this could have been a knockout. Instead, it lands with a thud.