Starring David Tennant as the liberal intellectual seduced by the Nazi cause, Dominic Cooke’s Good is an abstract and at times confusing take on the famous Holocaust play

In director Dominic Cooke’s abstract production, just two supporting actors play the various characters in Halder’s life. To put that in perspective, the last major revival of Good, at the Donmar in 1999, reportedly featured a cast of 10. Unfortunately, the lack of performing bodies here makes the narrative, which flits about in time and location, tricky to follow if you don’t already know the story.

One of them is, of course, TV star David Tennant (Doctor Who, Broadchurch). Performing in his own Scottish accent, his uptight and brooding portrayal of Halder is very good, but not enough to make Cooke’s confusing, overtly intellectual production wholly engaging. 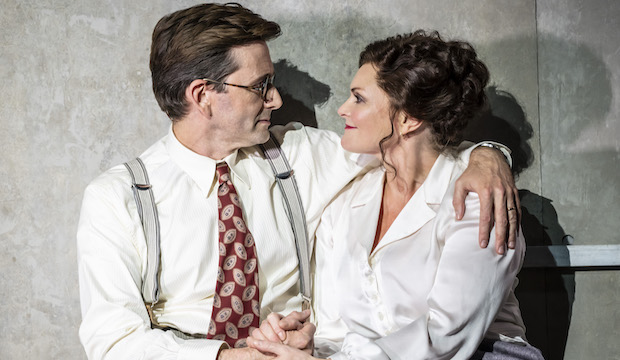 Good doesn’t tell an overly simplistic story of good guy turned bad. Put his rationalising of the Nazi cause to one side and we still see Halder elope with a young lover to escape a life of caring for his aged mother and mentally ill wife. Then there’s his propensity to disassociate from reality, hearing things including an orchestra playing in his mind. Here, this is portrayed through Tom Gibbons' hard-working sound design, filling our ears with Will Stuart’s classical music arrangements, or evoking the shuffling of physically absent papers.

Vicki Mortimer’s minimalist stage design, which unveils its full potential during the burning of the books scene and a later moment which we won’t spoil, positions the action in a suffocating concrete cell. Zoe Spurr’s lighting blinks between warm hues and chilly blues to carry the narrative between its locations, including Halder’s home, a hospital ward and a park. Watch these blinks closely or you might get lost; there are no costume changes or arrival of props to help viewers move mentally between scenes. 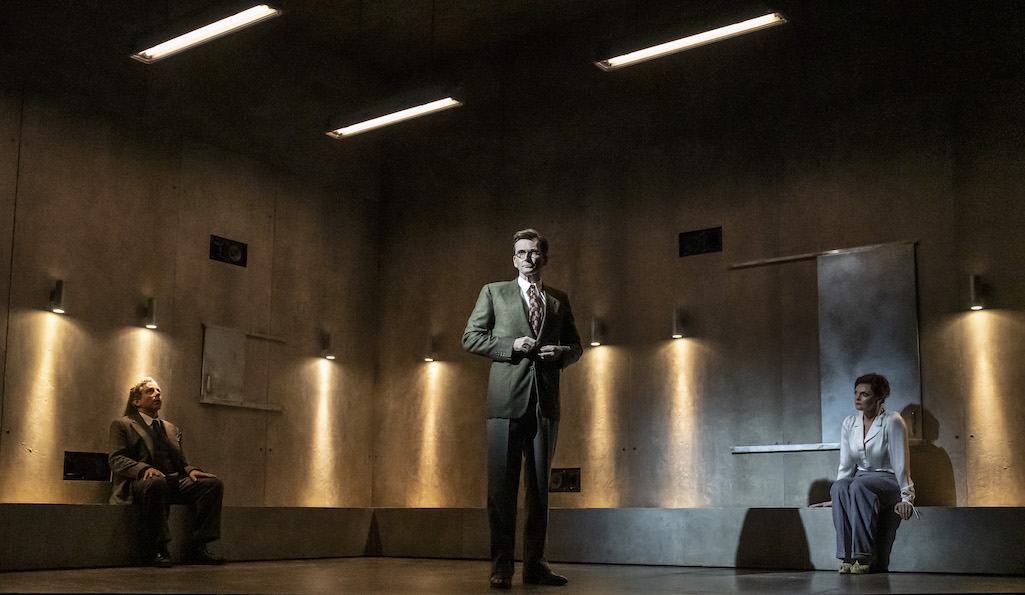 Sharon Small (Still Alice on stage, the BBC’s The Inspector Lynley Mysteries) plays virtually every female character, adopting a harsh wail as Halder’s blind, senile mother, then softer tones to play both his wife and younger lover. Cabaret’s Olivier-winning Elliot Levey plays Maurice, a psychiatrist, friend of Halder’s and the one voicing the Jewish experience in the piece. He's charming, gentle but ultimately sidelined as his powerless voice is faded out of the narrative.

In one particularly chilling scene, set during the Night of Broken Glass, Halder sees himself sat beside Maurice, with whom he used to love philosophising, justifying the monstrosities of the Nazi party. All the while the defenceless Maurice remains mute.

Taylor’s making-of-a-Nazi drama remains an important title in the Holocaust canon. It’s a frightening illustration of how susceptible we humans are to terrible regimes, especially when they benefit us personally and enough people around us are supporting them too. Tennant is compelling as Taylor’s fallible traitor, but Cooke's unnecessarily muddled production won’t hold everyone’s attention.