Grammy-winning, hit Broadway musical The Band's Visit impresses at the Donmar Warehouse in a new production directed by Michael Longhurst

The Band's Visit, Donmar Warehouse review 4 The Band's Visit, Donmar Warehouse review Holly CW
Strangers in a foreign land, an Egyptian band find themselves stranded in a dead-end Israeli town on their way to perform at the Arabic Cultural Centre. What ensues is beautifully banal. Michael Longhurst’s production of David Yazbek and Itamar Moses’ Grammy winning musical carves a simple story of friendships, romances, and yearning, blossoming across political lines over the course of one night in the Negev.

When the Egyptians first arrive the tension is palpable yet unspoken; tension lingers through icy glares shared between the Israeli locals. The region’s tempestuous history is enshrined in memory, and the production never spoon-feeds its audience; it lingers unspoken in the acrid air. 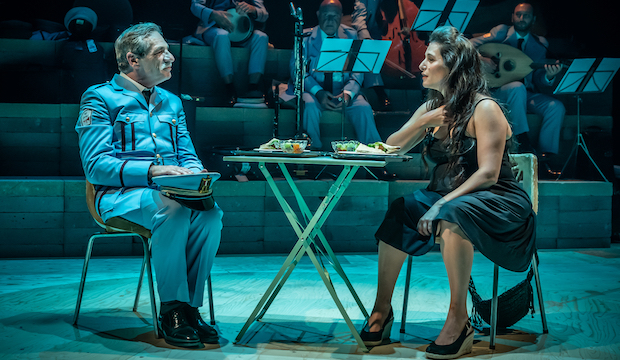 But a warm tenderness soon washes the tension away as the band split up for the night and are paired off with villagers. Despite communicating in broken English, the Israelis and Egyptians peel away their political allegiances to reveal their humanity. One quietly poignant scene sees members from both parties spontaneously break out into Gershwin’s Summertime, the discovery of a shared language between them. The Bard said it best: “if music be the food of love, play on.”

Despite politics laying the groundwork for the story, the musical is not political. Longhurst relegates discourse to the background. A palpable sense of compassion and warmth takes the limelight instead. The result is a refreshing counterpoint to the routine depictions of Israel as a raging warzone and of Israelis and Arabs at each other’s necks; this is theatre that genuinely celebrates our humanity without polemics, posturing or pretence. 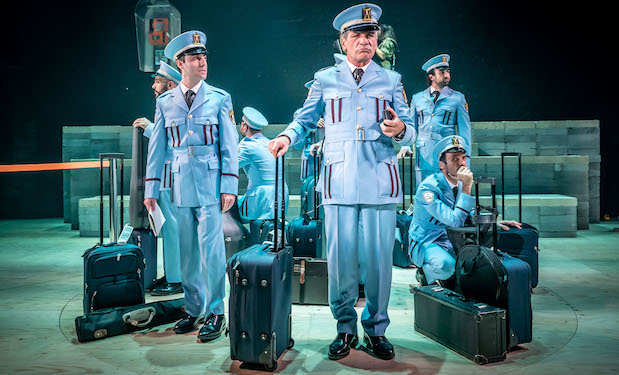 The production’s effervescent magnetism lies in its simplicity; Soutra Gilmour’s set is anything but grandiose, just austere plywood and a few dangling lights reticent both of the ochre Middle Eastern desert and the looming ennui that has swallowed the village whole.

It gives space for the characters to live, breathe, and discover their common ground. The smooth-talking Lothario trumpeter Haled, equipped with cheesy Chet Baker chat up lines, takes bashful Israeli Pepi under his wing for the night to a club. Alon Moni Aboutboul’s Tewfiq, the band’s uptight conductor, lets his emotional guard down to reveal his tender side to Miri Mesika’s wistful Israeli café owner Dina.

The score’s fabric shrewdly intertwines the cultures, synthesising the jazzy jerkiness of Jewish Klezmer and the swirling melodies of classical Middle Eastern music. But again, the emphasis is always on the quotidian; don’t expect heightened Broadway melodrama or flamboyant dance sequences.

Its greatest strength may also be its weakness, the banality does lead to some predictable exchanges. But that is the point. With a subject matter and setting so accustomed to grand narratives about good and evil, something so mundane becomes quietly subversive, especially when it oozes with this much charm.