3 CW readers are interested
Pressure, Ambassadors Theatre review 3 Pressure, Ambassadors Theatre review Lucy Brooks
Seventy-four years after the D-Day landings, the war story reaches new audiences as Pressure by David Haig transfers to the West End following successful runs at Edinburgh, Chichester and the Park Theatre. The story is set over a 72-hour period and follows the final countdown to D-Day, but from a rarely focused on perspective: that of the meteorologists tasked with predicting the weather that will enable – or prevent – troops from advancing onto mainland Europe.

Haig plays Group Captain James Stagg, a Scottish meteorologist who is one of two experts encharged with advising Dwight D. Eisenhower (Malcolm Sinclair) about the weather conditions approaching the landings. Stagg predicts storm clouds, winds and rain, while his American counterpart, Colonel Irving P Krick (Philip Cairns), forecasts a 'glorious summer’s day'. Such juxtaposing weather predictions presents General Eisenhower with a big problem; he’s responsible for giving the order for 21,000 vessels to set sail, and many more aircrafts to fly, but he needs to be certain of favourable weather conditions to limit the number of potential casualties. With his meteorologists disagreeing, there’s a serious amount of pressure hanging on all shoulders and very little time to make a decision.

We’re soon swept up in weather charts, climatic terminology and the intensity of the situation. Haig’s writing doesn’t achieve what Michael Frayn’s cleverly does in Copenhagen, where we’re given a topic (in Frayn’s case nuclear physics) and brought into the drama in a way that makes us feel we understand its complex subject matter, too. All the same, we’re gunning for Stagg’s prediction from the start (and those who know their history will already know the outcome). 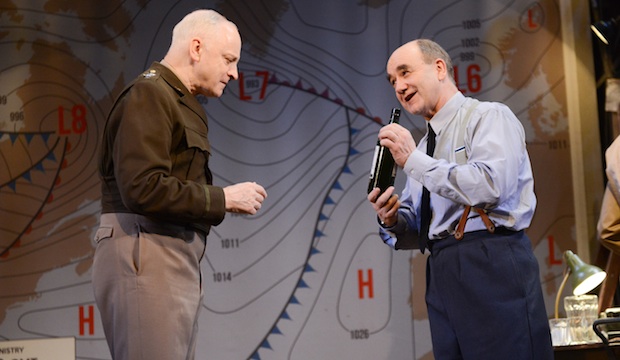 After a while, the many references to our British enjoyment in discussing the weather start feel a little trite. Stagg’s remark: 'Nothing’s predictable about British weather, that’s why we love to talk about it,' gets a big laugh, but the subsequent similar remarks come across as corny, as if Haig is capitalising on the ‘Britishness’ he knows will make his audience swell with empathy. Similarly, the play is peppered with references to war-time rations, and the scene in which General Eisenhower and Kay Summersby (a particularly good Laura Rogers) sit down to enjoy a scarcely available orange feels over-egged.

TRY CULTURE WHISPER
Receive free tickets & insider tips to unlock the best of London — direct to your inbox
Haig is renowned as an Olivier-winning actor, with a career spanning big screen to stage and for writing hit plays including My Boy Jack (1999) and The Good Samaritan (2000). Pressure feels very much like Haig’s baby and he gives an impassioned performance in the titular role – which also happens to be the part which plays for the most laughs and has the most interesting backstory (not only is Stagg charged with taking the all-important weather readings every few hours, his pregnant wife is in hospital with dangerously high blood pressure).

Haig’s writing is often gripping, although the second half of Pressure drags when the talk turns to sport, family and homelife. That said, the scene in question does a good job of capturing the essence of the long night’s wait for news of the landings. This long episode also contains a poignant, philosophical conversation between Eisenhower and Stagg, which is one of the play’s highlights. The two men are discussing personal loss (Eisenhower of his eldest son and Stagg of his brother), before Eisenhower imagines what that deeply personal experience of grieving would be like for the families of the thousands of soldiers who could (and we know would) lose their lives during the landings.

Employing a cast of 11 for the production seems excessive, especially given several actors just have occasional walk-on parts. And while Colin Richmond’s superb, naturalistic costume and set design transported us straight back into Stagg’s tense office, aspects of the play feel a bit stuffy and old fashioned. But with Pressure, Haig has created a nostalgic play that’s a tribute to the meteorologists of WWII and a piece of theatre that tells an important part of history from a fresh perspective.