The feel-good and fight-hard hit is back for a third chapter in a new location: GLOW heads to Vegas, and the competition is still heating up

Ruth, Debbie and the rest of the team have packed up and left for Vegas, where their smalltime show is getting a bigger platform. The whole girl gang is still involved, including shifty manager Sam (Marc Maron), loveable hype man Bash (Chris Lowell) and Ruth's new boyfriend and cameraman Russell.

The most exciting addition to the upcoming season comes in the shape of Geena Davis (Thelma & Louise, A League of Their Own) as Sandy, a new Entertainment Director on the scene. The stakes are higher – as the stars have been reached and what matters now is figuring out how to stop getting burned.

GLOW has managed to entertain and educate for two drastically different but equally rewarding seasons, as Ruth and Debbie have come to terms with their broken friendship, and each woman suffers her own insecurities specifically and strongly. Season 3 looks to be bittersweet, mournful and more vulnerable.

With inevitable fallouts, heartbreak and plenty more fights, the punches pulled in the first few images of season 3 are warming up what's set to be a firecracker third instalment – coming to Netflix on 9 August. 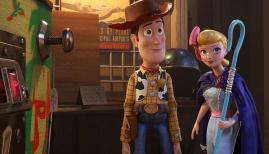