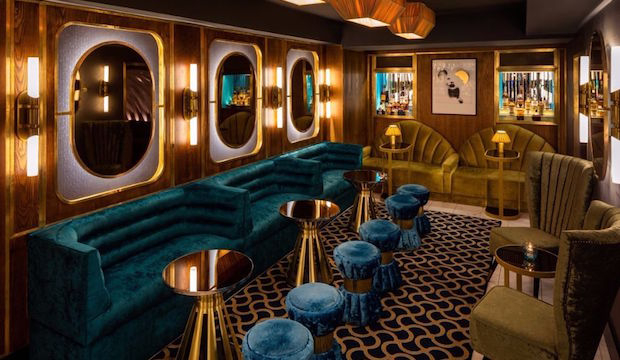 The Punch Room, Fitzrovia: While the Berners Tavern is charming, the London Edition Hotel has a trendier, more exclusive bar to its name. Straight through the foyer, behind a unmarked wood panelled door hides the reservations-only dimly lit, socially charged Punch Room. Delicious cocktails and plenty of lounging celebrities.

69 Colebrook Row, Islington: With a very advanced menu and a well-heeled clientele, this speakeasy style cocktail bar from master mixologist Tony Conigliaro is known far and wide as the 'Bar With No Name'.

Disrepute, Soho: A secret basement bar with room to breathe. Sixties and cave-like in style, it's perfect for late night liaisons. (Pictured)

The Blind Pig at the Social Eating House, Soho: A blindfolded hog door-knocker underneath a retro 'Opticians' sign is this super-chic bar's only external street-level clue. With a speckled mirror ceiling and copper-topped bars, seating is tight so you may just end up bumping knees with a member of London's 'it' crowd.

Beaufort Bar at the Savoy, Covent Garden: It's the younger, cooler sibling of The Savoy's well-loved American Bar that is just as sparkling, and just as glamorous. Think Art Deco, flutes of champagne and a touch of cabaret. They also boast an incredibly cool, pop-out menu (the prices may bring you back down to earth).