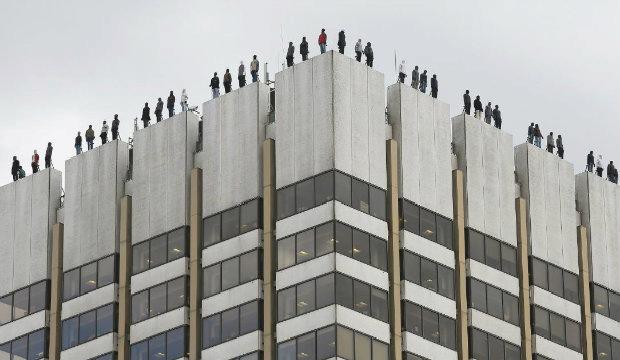 Mark Jenkins, Project 84, 2018, CALM
Looming large on ITV London's rooftops stand 84 unidentifiable figures. Unexpected and mysterious, the anonymous human-like shapes teeter on the edge of the buildings' rooftops. About to plunge to their death, the collective strikes an uncomfortable and harrowing chord. The Mark Jenkins sculpture, Project 84, is art with a purpose.

The 84 hooded figures, created by US street-artist Mark Jenkins out of packing tape, have been installed to raise awareness around the still taboo topic of male suicide. Provocative yes, insensitive, maybe, but futile, definitely not: causing controversy on London's streets, Project 84 has ignited the much-needed conversation around male mental health, and aims to trigger change fast.

And that change is long overdue. The UK figures around male suicide are hallucinating. On average, 84 men in the UK take their lives each week, with over 75% of all suicides in the UK in 2015 reported as being male. Shockingly, suicide remains the single biggest killer of men under 45 in the UK. To accompany Jenkins' provocative installation, Matthew Smith, leader of the Project 84 petition, has collated 84 individual stories of male suicide, told by friends and family, and published them on the Project 84 website. 'CALM has been campaigning and providing support services for eleven years but, try as we might, it isn’t enough to tackle the enormous problem of male suicide,' said Simon Gunning, CEO of CALM (Campaign Against Living Miserably).

The scale of the new Project 84 campaign, is like nothing we have seen before in the capital. By collaborating with Jenkins, CALM hopes to dramatically escalate the level of public awareness around the subject. 'Rather than mourning their loss, together we’ve built something based on the hope that out of tragedy we can help drive real, lasting change,' Jenkins has said.

It's time to join the conversation #project84 and ignite change!