If you've seen Fight Club or (500) Days of Summer, you might recognise the loud-quiet rock of Pixies: In London this September

Pixies, Alexandra Palace Pixies, Alexandra Palace Ella Kemp
If you're not familiar with Pixies by name, maybe it's better to start another way: Have you seen Fight Club? How about (500) Days of Summer? The alternative rock band have soundtracked crucial scenes in some of our favourite scenes, and are still touring to offer audiences a much wider understanding of what they're made of.

Whether it's 'Where Is My Mind?' or 'Here Comes Your Man', there's a chance that you've screamed along to some of Pixies' lyrics, written mainly by Black Francis. The four-piece is led by Francis, alongside Joey Santiago, David Lovering, and since 2016, Paz Lenchantin.

Since rising to prominence in the 1990s alongside the likes of Nirvana, Radiohead and Weezer, Pixies carved their own path until an initial separation in 1993. But, like all the best influential rock bands, they found a way back in 2004 and have been working with the same lineup since 2016.

There's more to the band's music than the handful of megahits – which is why the upcoming live show has so much to offer. Their alternative style is one that balances soft and hard rock, specifically through 'loud-quiet' shifts. This allows for infectiously enjoyable music through headphones as much as through the echoing speakers of Alexandra Palace.

Become part of the movement, revisit history or just hear the unmistakable Fight Club riff in the flesh with Pixies this September. 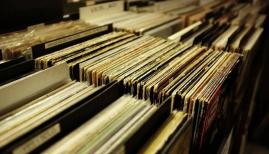 Where to find the best record stores London has to offer
Sign up to CW’s newsletter
By entering my email I agree to the CultureWhisper Privacy Policy (we won`t share data & you can unsubscribe anytime).