Pack your bags, we're off to Cheltenham! Literary festival programmes don't get much better than this

TRY CULTURE WHISPER
Receive free tickets & insider tips to unlock the best of London — direct to your inbox
For a few weeks in October, marquees take over the two elegant Regency squares in the town centre, and the literature festival settles snugly into Cheltenham life.

It’s been a proud local event since its inception in 1949, making it the longest-running of its kind, as well as one of the most prestigious. With the Cheltenham Jazz, Science, and Music festivals also taking place during the summer, this Gloucestershire spa town becomes one of the most culturally happening places in the country for several weeks of the year.

This year's Cheltenham Literature Festival line-up is a typically starry affair. We've picked out the highlights, below. 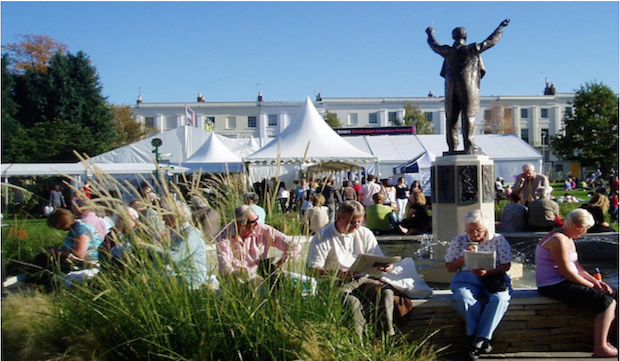 Tom Daley, the champion diver, has learned from the best about how to stay fit and healthy as detailed in his new book, Tom’s Daily Plan. He joins broadcaster Jill Douglas to share his secrets on staying strong and positive both in everyday life and in the run-up to competitions. On 7 October.

Salman Rushdie's acclaimed compelling new work, The Golden House, is set in Manhattan and spinning the story of the American zeitgeist over the last eight years. He discusses identity, terror and alternative truths with the journalist Alex Clark. On 7 October.

Mary Berry, the much-loved former Great British Bake Off judge has been teaching the nation to cook on TV and in her books for over 40 years. She joins us to reflect on a long and successful career from the Cordon Bleu to Cookery Magazine editor, the Bake Off tent to being awarded a CBE – and everything in between. She joins Steven Gale to discuss her remarkable career and launch her brand new book, Mary’s Household Tips and Tricks: Your Guide to Happiness in the Home. On 8 October.

Mary Beard is back by popular demand with fellow Classics don, Llewelyn Morgan, and author and classicist Peter Stothard. How To Read A Latin Poem is a masterclass on Virgil, focusing on Eclogue 9. Join for a chance to take a fresh look at ‘pastoral poetry’, and to go beyond the lovesick shepherds to find some tougher messages. Translations are provided and only minimal knowledge of Latin is required. On 8 October.

Alastair Campbell recalls the end of the Blair years and the transition to Gordon Brown’s troubled premiership. Aside from politics, he reflects on his continuing mental health struggles, his attempts to rebuild a normal family life, and working with elite sportsmen including the British and Irish Lions. On 11 October.

Paul Nash's haunting depictions of the battlefield brought home to a nation the horrors of war and changed the course of landscape painting. Art historian David Boyd Haycock reflects on a pioneering life and a powerful legacy. On 12 October.

Roger Scruton (On Human Nature) argues that we are not simply the human animal in an original and radical defence of human uniqueness, emphasising the importance of freedom, value and accountability in our shared world.

Nigella Lawson shares her latest collection At My Table, filled with dishes as mouth-watering and inventive as ever, the food that makes people feel happy and welcome as they sit around your table. On 14 October.

The Moth is an international phenomenon dedicated to celebrating the power of unscripted, first-person storytelling. From ordinary folk to celebrities and cultural giants, the stage is open to anyone with a flair for the telling of tales. Join us for one special night of true life stories. On 14 October.

The Times Debate: A Good Brexit After All: As our membership of the EU draws to a close we ask: how has the UK being in Europe changed us? Can we achieve a Brexit that reconciles young and old, north and south and town and country? Will Britain be looking forward to a golden future with opportunity for all? The Times Berlin Correspondent David Charter (What Has the EU Ever Done for Us?) and columnist Jenni Russell join the outspoken political commentator Douglas Murray (The Strange Death of Europe) the director of The Institute for Fiscal Studies Paul Johnson and the Conservative MP Anna Soubry, to search for a consensus with BBC Radio 4 Today presenter Justin Webb. On 14 October.

Harriet Walter (Brutus and Other Heroines) discusses playing Shakespeare’s male and female leading roles and gives a remarkable account of an acting career unconstrained by tradition or expectations. On 15 October.

Head over to the Cheltenham Festival's website for many more fabulous events.