Arthur Elgort's previously unreleased images of Kate Moss, which have never been seen in public before, will be presented alongside iconic works by the foremost fashion photographers of the last century. This forthcoming fashion exhibition in the intimate space of LUMAS Mayfair will explore how fashion photography has been made into an art form over the last century.The exhibition will also include work by leading photographers such as Horst P. Horst and Patrick Demarchelier.

Fashion photography is having a major revival in London at the moment, almost as if the lengthy Guy Bourdin exhibition at Somerset House (which is about to end, make sure to catch it if you haven't already) has sparked a renewed fascination with the form. With London as the final stop on what has been a worldwide tour, this boutique exhibition in Mayfair promotes further considerations of fashion imagery, with images from the Vogue Archive Collection allowing audiences to delve deep into the history of fashion photography. 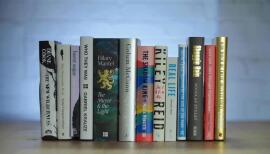 What to read from the Booker Prize long list