Balenciaga has followed in the footsteps of a handful of other fashion houses by opening new spaces on Sloane Street. Fendi, Hermès, Versace and Armani have recently expanded to the location, with Burberry planning to open a new store there in 2020. 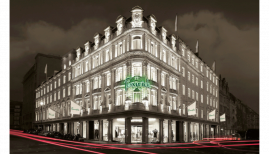