The best new shops and boutiques in London

In an age where fashion's fortune-tellers predict the death of the high-street and an eerie quiet descends as buyers take to their keyboards, a handful of new retail spaces are breaking free of such forecasts.

Whether merging fashion with art in new interactive spaces, or using stunning design to draw in an Instagram generation of shoppers, these are our favourite new London shop openings of the past year. 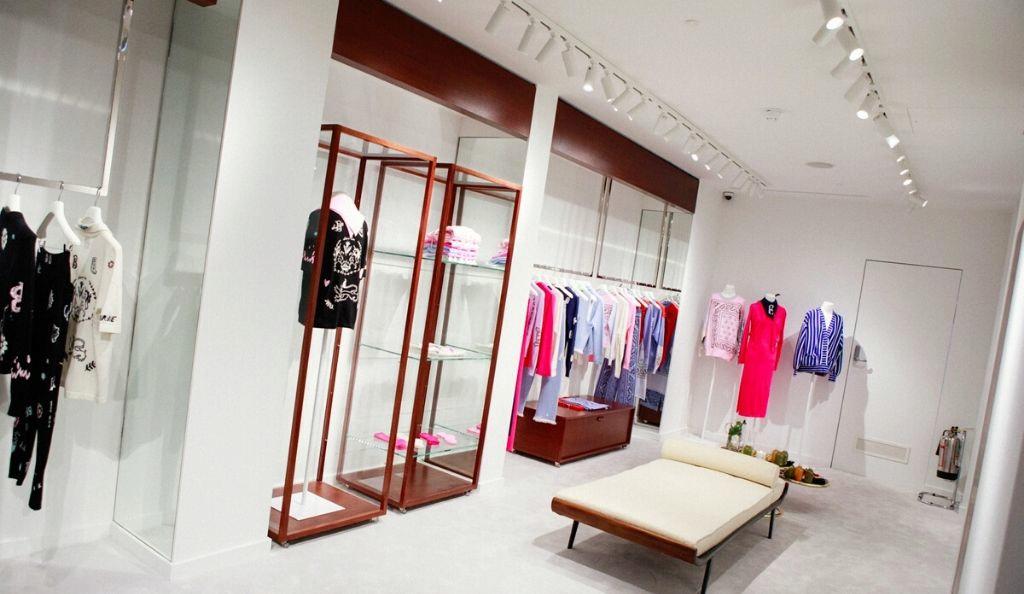 What do you get when you cross the century-old craftsmanship of Scottish cashmere production with Parisian elegance? You get Barrie, the latest arrival on Conduit Street.

Part of Chanel's Paraffection stable of ateliers and artisanal workshops, Barrie has had something of a high fashion makeover since it was bought by the company in 2012.

In 2018, Augustin Dol-Maillot was installed as creative director, bringing the flair he has honed over a career in the studios of Chanel, as costume designer at the Bolshoi ballet and art director of a Parisian design agency.

At Barrie his theatrical and branding experience come to the fore, bringing vibrancy, a graphic edge and plenty of novel ideas to a label that's blooming under the spotlight.

The new two storey Mayfair boutique is a fine example of the marriage between old and new over which Dol-Maillot presides. Granite stone floors and windows are mixed with wood and slate, creating an atmosphere that is both warm and sophisticated. Engravings of the Barrie logo replete with thistles and curlicues echo Dol-Maillot's take on traditional patches pledging allegiance across British football, American varsity, politics and more.

Downstairs there is a salon atmosphere thanks to vintage furnishings and made-to-measure seating, upon which customers can perch as they commission a one-of-a-kind cashmere creation. Underfoot, a tartan patchwork carpet plays tribute to Hawick, the Scottish town where the Barrie factory can be found. 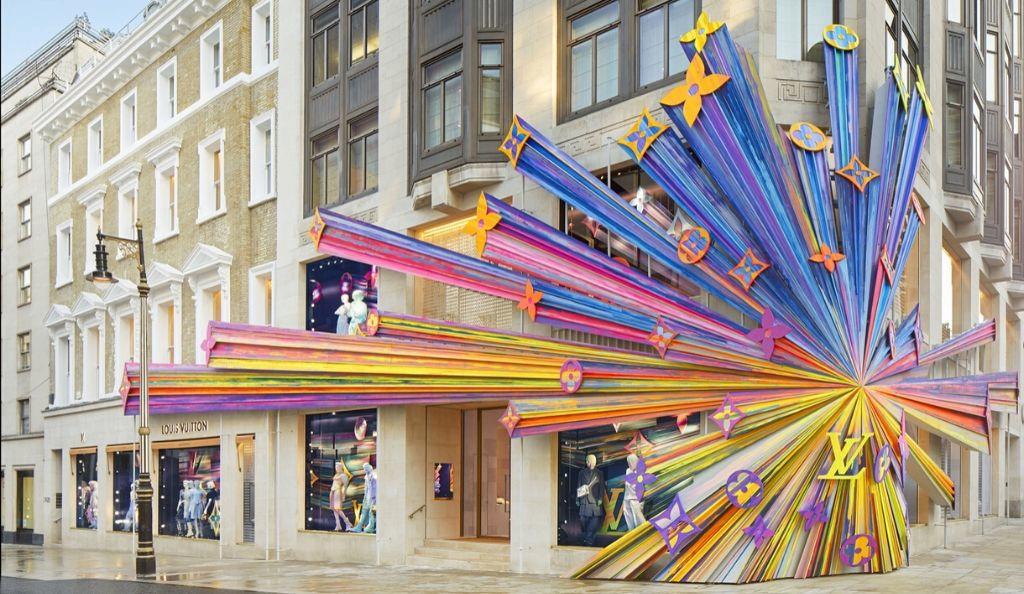 After fourteen months of rennovations, Louis Vuitton has reopened its prismatic New Bond Street store in a spectacular display of fanfare. At the entrance, a colossal rainbow installation by Brooklyn-based artist Sarah Crowner beckons shoppers with heady drama, whilst the interior boasts an illustrious curation of artworks from art giants like Tracey Emin and James Turrell.

The reimagining of the light-filled space on New Bond street was dreamed up and rendered by New York based architect Peter Marinos, famed for his daring and love of spectacle. 'I want to breathe,' Marino told The Financial Times, 'the customers in the stores I do are intelligent enough to understand that if you look out of a window and see a tree, it's not going to keep you from buying a dress. That's old schmutter-land thinking.'

The ground floor features a handbag bar with personalisation services, Vuitton objets and a book shelf showcasing the brand's city guides - a reminder of Louis Vuitton is a brand built on travel. The first floors hosts womensear, while menswear can be found on the lower-ground floor. 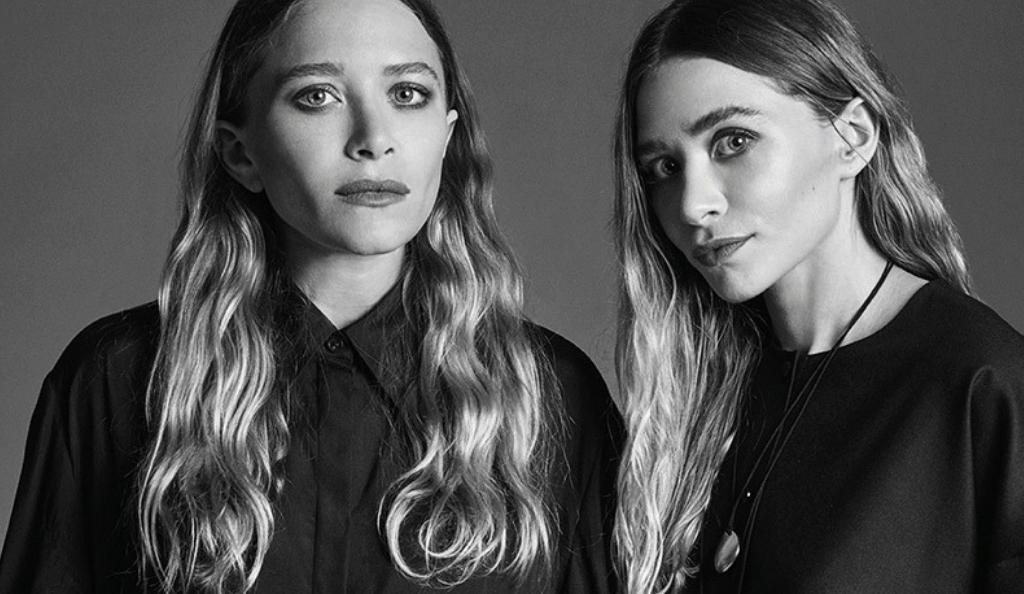 Fashion's favourite twins — who've been dubbed 'the impossibly chic dementors of fashion' by Raven Smith thanks to the constant draping of their fragile frames in layers and layers of black — are bringing their luxury fashion label The Row to London with an art-filled, airy boutique in Carlos Place. 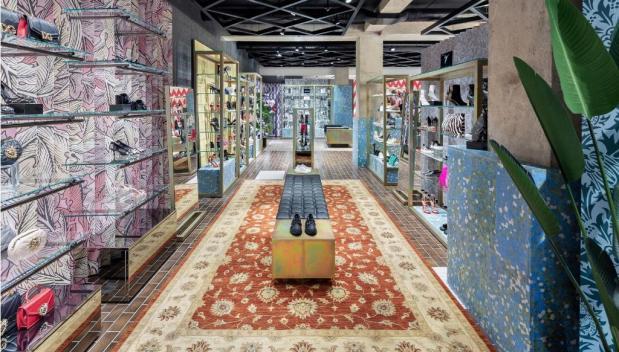 Oxford Street has a shimmering, futuristic new addition, a mecca for sneakerheads and worshippers of hypebeast culture alike. 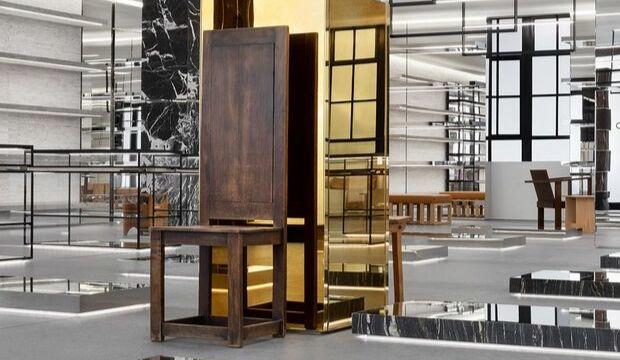 The Slimane-ification of Celine continues as the brand's Mount Street store finally reopens after an extensive makeover.

Expect an architectural edginess, clean lines, a focus on materials such as steel, marble and mirrors, plus a spotlight on art including original commissions. 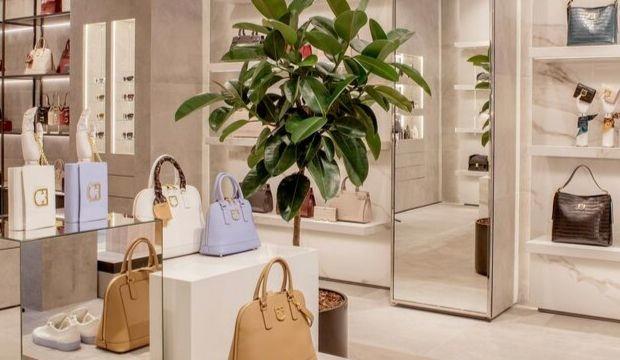 A clean and serene approach to interiors is the order of the day at Furla's third London boutique, showcasing leather goods and footwear for women and men. Sunglasses, jewellery, watches and textiles round out the offering from the Italian luxury brand. 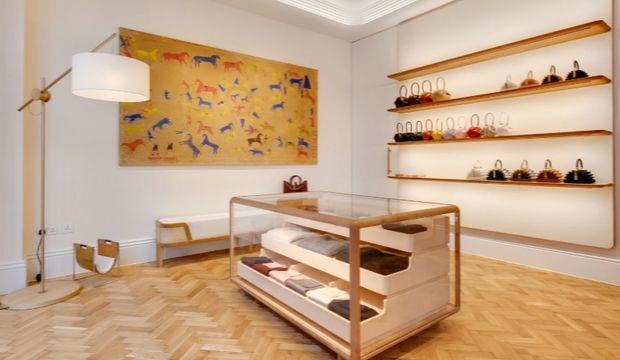 Gabriela Hearst has fast become a major fashion player thanks to her impeccable good taste and commitment to sustainability. Her new London flagship – the first European outpost for her New York-based brand – is further testament to that. Designed in partnership with renowned architectural firm Foster Partners, the new boutique is located opposite Claridge's.

Paying more than lip service to sustainability, reclaimed materials include custom Benchmark furniture crafted from a plane tree that fell during a storm in Lincoln, while the herringbone parquet floor is made from oak reclaimed from a former army barracks in Shrewsbury. 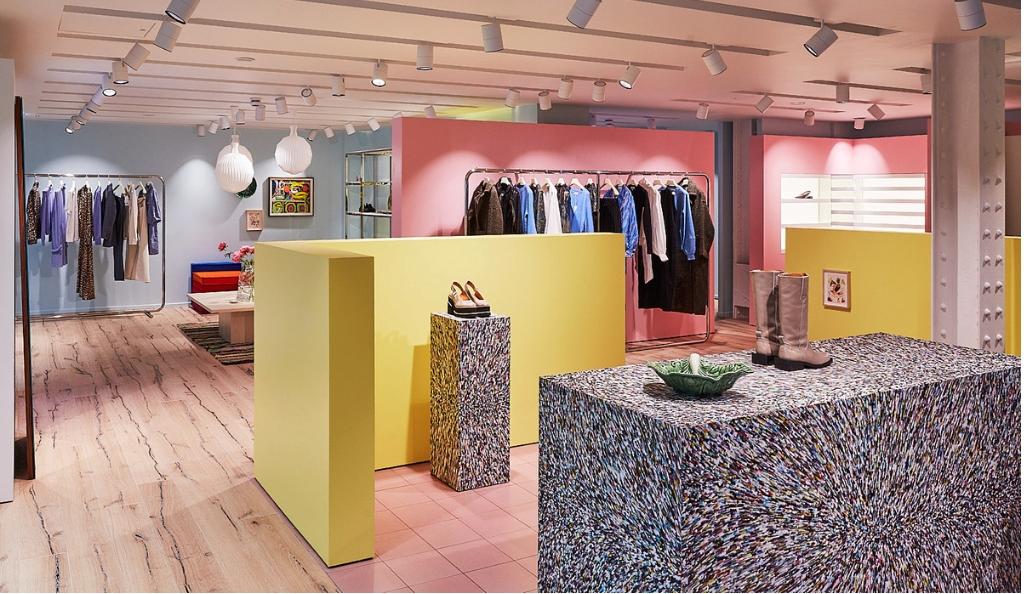 London's appetite for Scandi brand GANNI has finally been rewarded with a 2,750 sq foot bricks-and-mortar store, which has opened in Soho's Beak Street.

It is the first time that Londoners can experience the brand in full via an ice-cream coloured cocoon of cool, featuring exclusive artwork from female artists Emma Kohlmann, Monica Kim Garza and paper-mâché sculpturist Misaki Kawai. 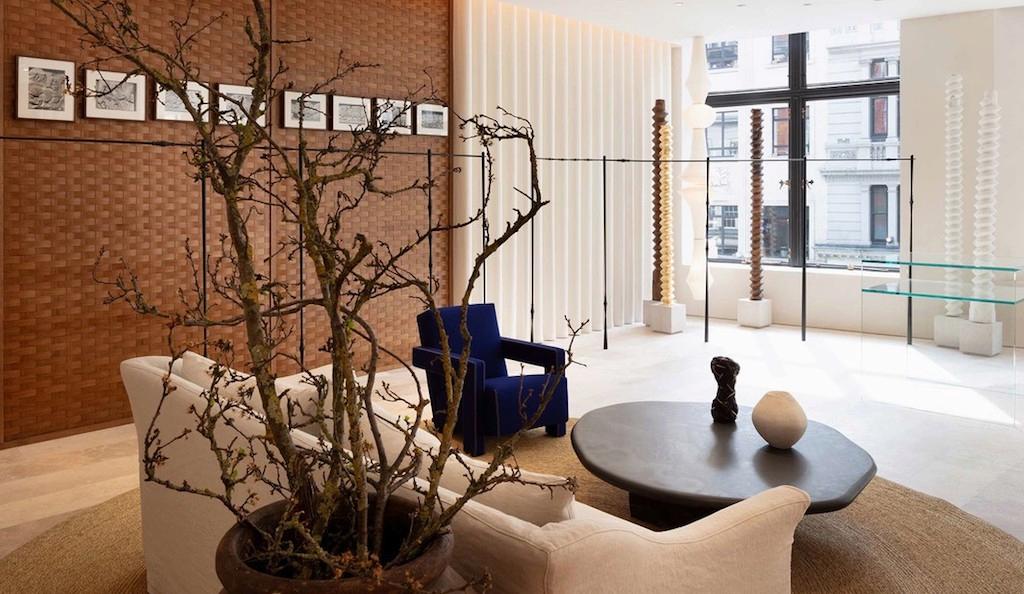 Casa Loewe is the brand’s experiential new London flagship that is located in a three-storey heritage property on Mayfair’s New Bond Street. Designed to evoke the home of a collector, the space boasts a Georgian-style spiral staircase that makes a sweeping sculptural statement, a cylindrical panoramic lift with brass detailing, and a dedicated pop-up space that will be used to exhibit capsule collections and art projects. 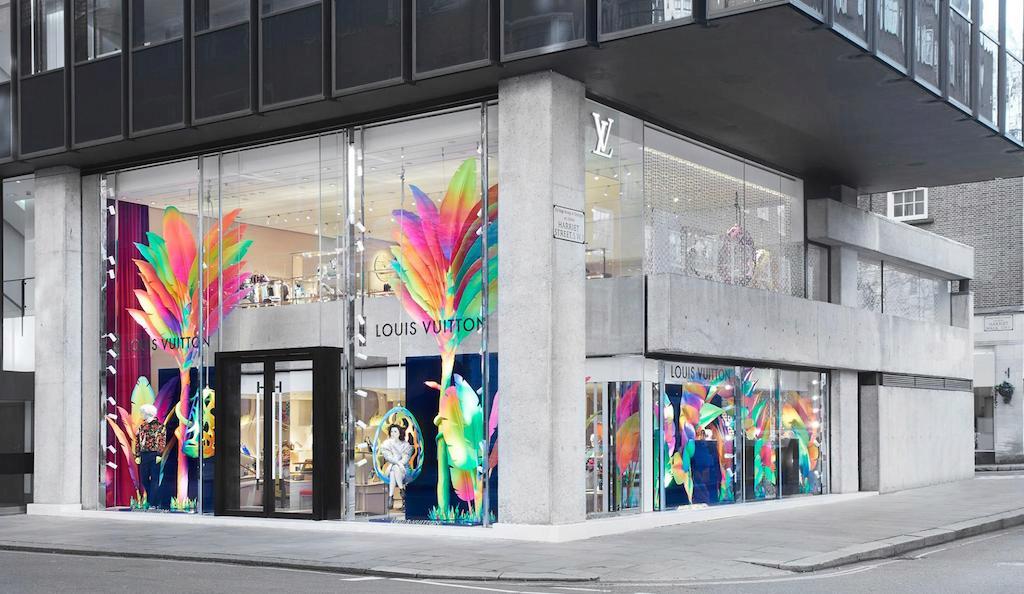 Louis Vuitton’s Sloane Street store reopened earlier this year, following a major renovation that aimed to emphasise the key features of the Grade II-listed, Brutalist building. And what goes with a new store? New art. With pieces by the likes of Tommaso Barbi and Roger Capron dotted about the impressive space, it’s an ideal destination for those who appreciate design as well as fashion. 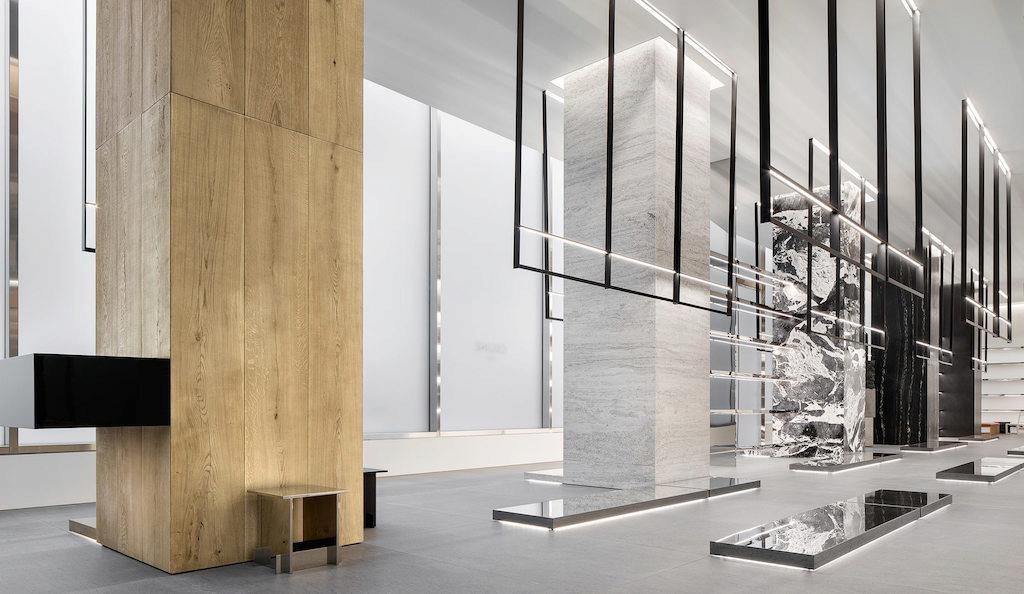 Hedi Slimane’s new Celine menswear flagship has arrived in Mayfair, in a flourish of Brutalism, polished marble and steel, and mirrors. Located at 164 New Bond Street, the 145sq m store is spread over two floors, and is a continuation of the Celine Art Project, in which each flagship is based around an individually commissioned artwork. 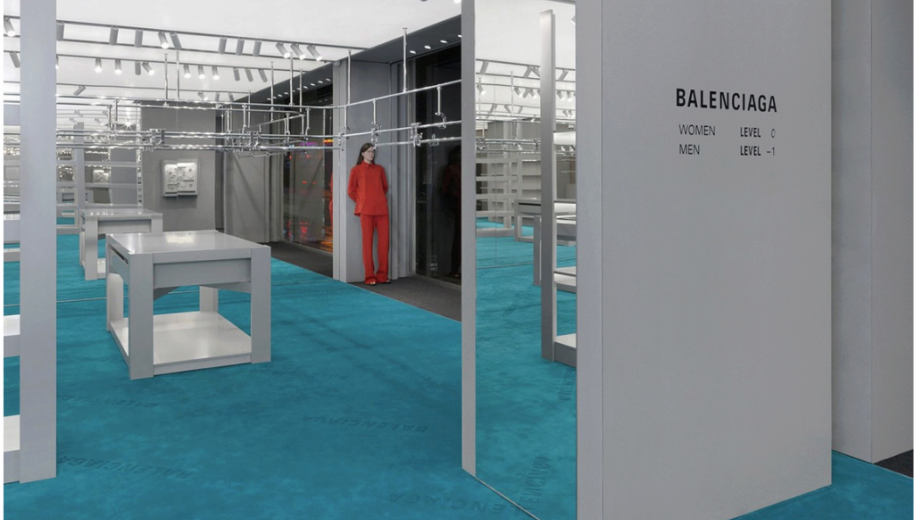 things to do in London