Karl Lagerfeld, creative director of Chanel died in Paris on Tuesday morning. Many of his friends, collaborators and fans paid tribute to the cult-figure known affectionately as 'Kaiser Karl' 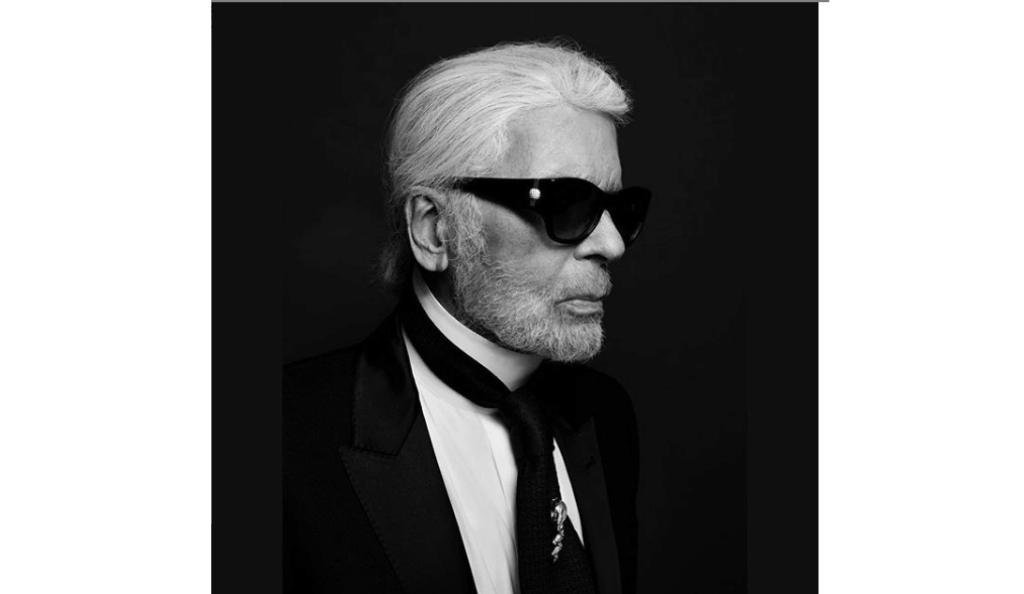 The fashion world mourns Karl Lagerfeld
The fashion world was rocked on Tuesday morning, when it emerged that Karl Lagerfeld, creative director of Chanel, Fendi and his own eponymous label had died in Paris. The most industrious man in fashion, Lagerfeld had shown little signs of slowing down despite his advancing years, continuing to create multiple collections, stage blockbuster shows and travel to far-flung destinations. Today Lagerfeld's friends, collaborators and fans took to social media to share tributes to the cult-figure, celebrity cat-owner and creative genius known affectionately as 'Kaiser Karl.' 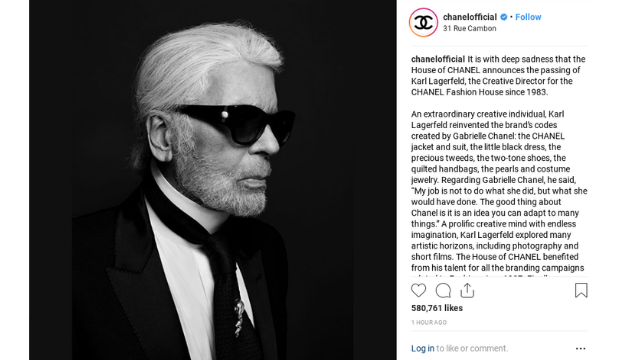 Chanel
It is with deep sadness that the House of CHANEL announces the passing of Karl Lagerfeld, the Creative Director for the CHANEL Fashion House since 1983.

An extraordinary creative individual, Karl Lagerfeld reinvented the brand’s codes created by Gabrielle Chanel: the CHANEL jacket and suit, the little black dress, the precious tweeds, the two-tone shoes, the quilted handbags, the pearls and costume jewelry. Regarding Gabrielle Chanel, he said, “My job is not to do what she did, but what she would have done. The good thing about Chanel is it is an idea you can adapt to many things.” A prolific creative mind with endless imagination, Karl Lagerfeld explored many artistic horizons, including photography and short films. The House of CHANEL benefited from his talent for all the branding campaigns related to Fashion since 1987. Finally, one cannot refer to Karl Lagerfeld without mentioning his innate sense of repartee and self-mockery.

Alain Wertheimer, CEO of CHANEL, said: “Thanks to his creative genius, generosity and exceptional intuition, Karl Lagerfeld was ahead of his time, which widely contributed to the House of CHANEL’s success throughout the world. Today, not only have I lost a friend, but we have all lost an extraordinary creative mind to whom I gave carte blanche in the early 1980s to reinvent the brand.” Bruno Pavlovsky, President of Fashion at CHANEL, said: “Fashion show after fashion show, collection after collection, Karl Lagerfeld left his mark on the legend of Gabrielle Chanel and the history of the House of CHANEL. He steadfastly promoted the talent and expertise of CHANEL’s ateliers and Métiers d’Art, allowing this exceptional know-how to shine throughout the world. The greatest tribute we can pay today is to continue to follow the path he traced by – to quote Karl – ‘continuing to embrace the present and invent the future’.” Virginie Viard, Director of CHANEL’s Fashion Creation Studio and Karl Lagerfeld’s closest collaborator for more than 30 years, has been entrusted by Alain Wertheimer with the creative work for the collections, so that the legacy of Gabrielle Chanel and Karl Lagerfeld can live on. 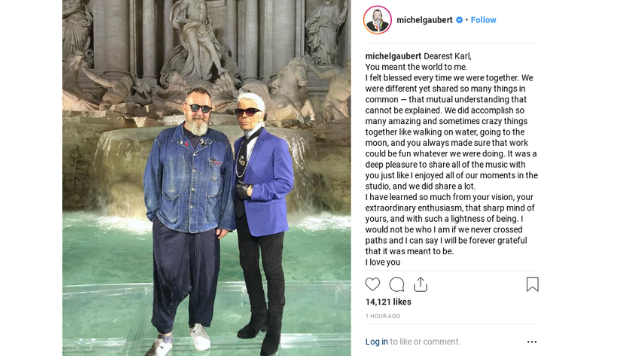 Michel Gaubert
Dearest Karl,
You meant the world to me.
I felt blessed every time we were together. We were different yet shared so many things in common — that mutual understanding that cannot be explained. We did accomplish so many amazing and sometimes crazy things together like walking on water, going to the moon, and you always made sure that work could be fun whatever we were doing. It was a deep pleasure to share all of the music with you just like I enjoyed all of our moments in the studio, and we did share a lot.
I have learned so much from your vision, your extraordinary enthusiasm, that sharp mind of yours, and with such a lightness of being. I would not be who I am if we never crossed paths and I can say I will be forever grateful that it was meant to be.
I love you 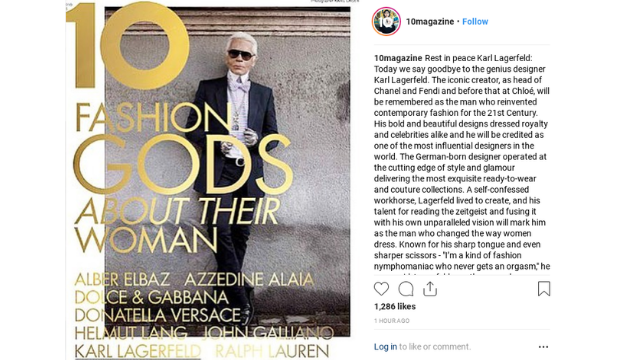 10 Magazine
Rest in peace Karl Lagerfeld: Today we say goodbye to the genius designer Karl Lagerfeld. The iconic creator, as head of Chanel and Fendi and before that at Chloé, will be remembered as the man who reinvented contemporary fashion for the 21st Century. His bold and beautiful designs dressed royalty and celebrities alike and he will be credited as one of the most influential designers in the world. The German-born designer operated at the cutting edge of style and glamour delivering the most exquisite ready-to-wear and couture collections. A self-confessed workhorse, Lagerfeld lived to create, and his talent for reading the zeitgeist and fusing it with his own unparalleled vision will mark him as the man who changed the way women dress. Known for his sharp tongue and even sharper scissors - "I’m a kind of fashion nymphomaniac who never gets an orgasm," he once said, Lagerfeld was the man who empowered generations of women through his incredible fashion and sense of style. We will miss you dearest Karl.
This self-portrait is taken from the cover of our 10th Anniversary issue 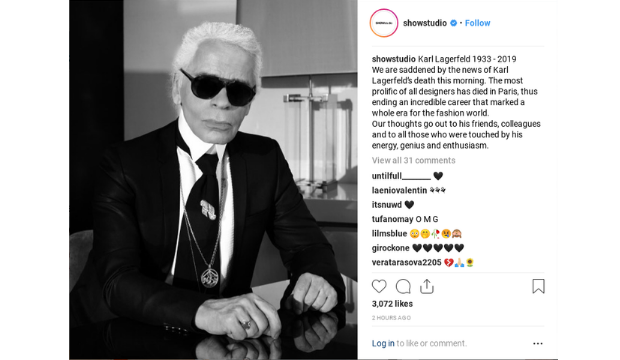 SHOWstudio
Karl Lagerfeld 1933 - 2019
We are saddened by the news of Karl Lagerfeld’s death this morning. The most prolific of all designers has died in Paris, thus ending an incredible career that marked a whole era for the fashion world.
Our thoughts go out to his friends, colleagues and to all those who were touched by his energy, genius and enthusiasm. 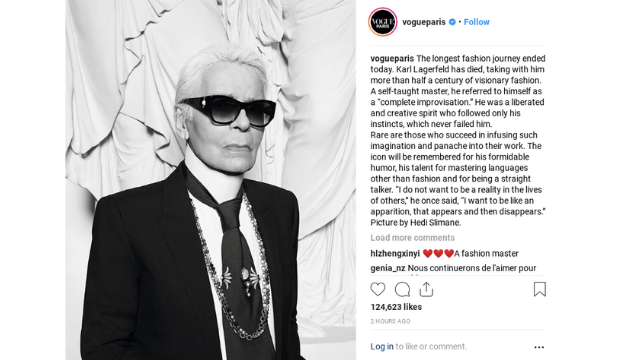 Vogue Paris
The longest fashion journey ended today. Karl Lagerfeld has died, taking with him more than half a century of visionary fashion. A self-taught master, he referred to himself as a “complete improvisation.” He was a liberated and creative spirit who followed only his instincts, which never failed him.
Rare are those who succeed in infusing such imagination and panache into their work. The icon will be remembered for his formidable humor, his talent for mastering languages other than fashion and for being a straight talker. “I do not want to be a reality in the lives of others,” he once said, “I want to be like an apparition, that appears and then disappears.” Picture by Hedi Slimane. 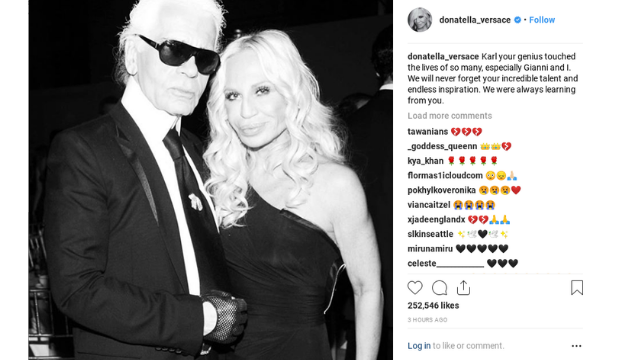 Donatella Versace
Karl your genius touched the lives of so many, especially Gianni and I. We will never forget your incredible talent and endless inspiration. We were always learning from you. 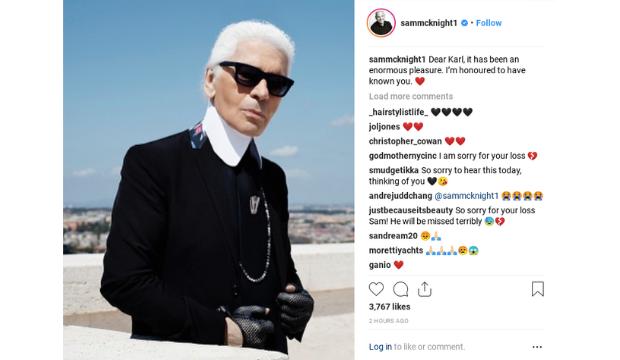 Sam McKnight
Dear Karl, it has been an enormous pleasure. I’m honoured to have known you. 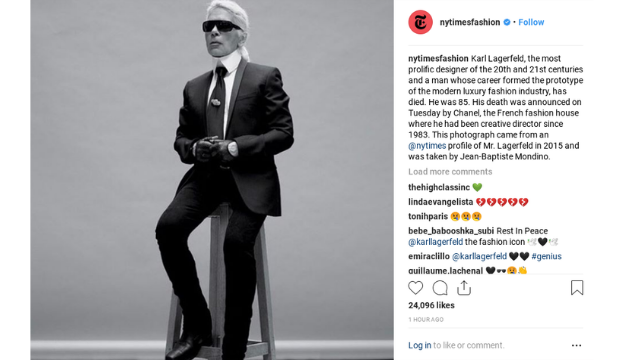 New York Times Fashion & Style
Karl Lagerfeld, the most prolific designer of the 20th and 21st centuries and a man whose career formed the prototype of the modern luxury fashion industry, has died. He was 85. His death was announced on Tuesday by Chanel, the French fashion house where he had been creative director since 1983. This photograph came from an NYTimes profile of Mr. Lagerfeld in 2015 and was taken by Jean-Baptiste Mondino. 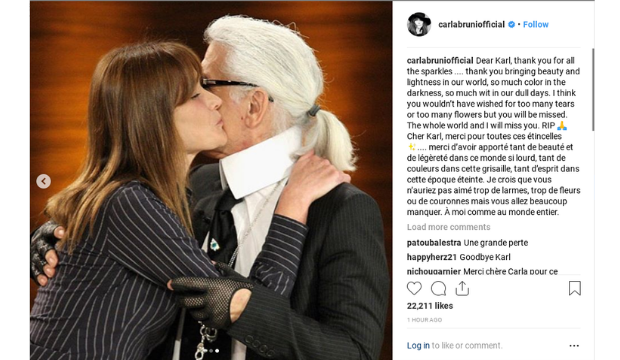 Carla Bruni
Dear Karl, thank you for all the sparkles .... thank you bringing beauty and lightness in our world, so much color in the darkness, so much wit in our dull days. I think you wouldn’t have wished for too many tears or too many flowers but you will be missed. The whole world and I will miss you. RIP 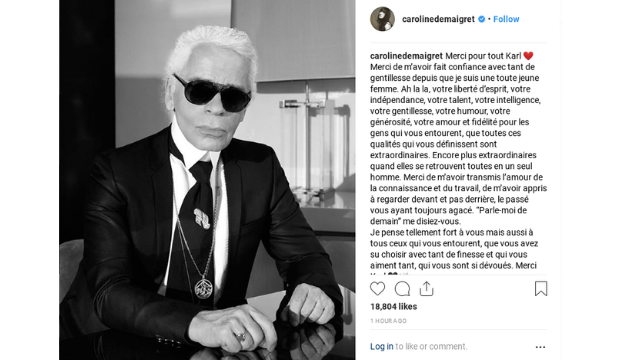 Caroline de Maigret
Thank you for everything Karl Thank you for trusting me so kindly since I was a very young woman. Ah la la, your freedom of mind, your independence, your talent, your intelligence, your kindness, your humor, your generosity, your love and fidelity to the people around you, all these qualities that define you are so extraordinary. Even more extraordinary when they are all in one man. Thank you for giving me the love of knowledge and hard work, for teaching me to look ahead and not behind, the past having always annoyed you. "Tell me about tomorrow," you’d say to me.
I think so strongly of you but also of all those around you that you have chosen so finely and who love you so much, who are so devoted to you.
Thank you Karl
"The intelligence continues" Karl Lagerfeld 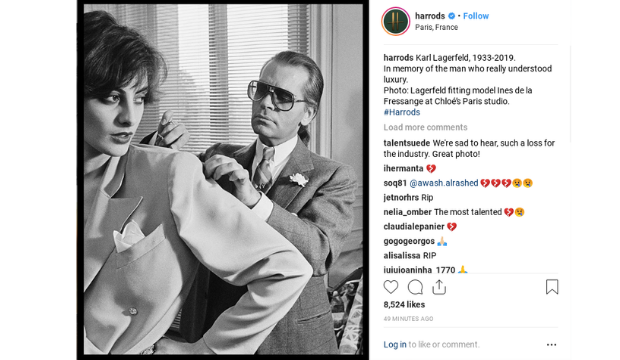