As her choreographic career takes off, Ruth Brill talks to Culture Whisper about turning Prokofiev’s Peter into a girl and working with the budding dancers of London Children’s Ballet 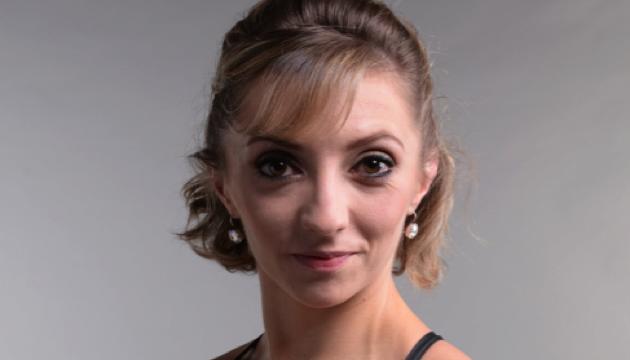 Ruth Brill, photo Richard Battye
Ruth Brill doesn't shy away from daunting challenges. A dancer with Birmingham Royal Ballet (BRB), she has been steadily forging a choreographic career, which is why, at the age of 30, she is preparing to hang up her pointe shoes and become a full time choreographer.

We spoke on a sunny Sunday in central London, just before she went into rehearsal with London Children’s Ballet. Their forthcoming show Ballet Shoes, which will be at the Peacock in early July, is one of two Ruth Brill is choreographing simultaneously, with much commuting between Birmingham and London. The other is Prokofiev’s Peter and Wolf, which BRB bring to Sadler’s Wells at the end of June.
Ruth Brill – Peter and the Wolf
Peter and the Wolf, a ‘symphonic fairy tale for children’ that weaves together music and a spoken narration, is Prokofiev’s most frequently performed work, and its parameters are fairly rigidly set, but that hasn’t hindered Ruth Brill’s creativity.

‘My brief from [BRB artistic director] David Bintley was to create a new version of Peter and the Wolf with Peter as a girl, without changing the narration or the music. So we had to strip everything back, we had to be quite creative. I really picked apart every single word, and realised that the essence of the story was not abut the setting, it was about the dynamic between the characters.’

In Prokofiev’s fairy tale a narrator tells the story, and the orchestra illustrates it. The setting is a forest, and among the characters are Peter, his grandfather, a little bird, a duck, and of course, the wolf. All figure in Ruth Brill’s Peter and the Wolf, but in a rather unexpected setting.

‘We shifted it into a present day urban setting: it’s kind of a recreational ground, basketball court, with a scaffolding tower at the back, therefore all the characters are modern day, personified characters. I sat down with David and discussed which dancers in the company could play Peter, and actually the dancers’ names I could live with, four out of five of them were girls.

‘So, it felt right to have Peter as a girl (…) and also, it is important that we do put females at the centre of things at the moment.’

There are other subtle shifts, too, but none that break the strictures imposed by the Prokofiev estate:

‘They’re a group of young people hanging out in this urban area, and it’s Peter’s Idea, “I know! let’s play out the story of Peter and the Wolf.” Peter then allocates [characters]: he throws a birdcage at this young boy and says, “you can be a bird.” So, he takes on the bird persona, there are things in the costume that hint at a bird, yellow and blue, like a blue tit, and he’s very fast, takes the mannerisms of a bird.’ 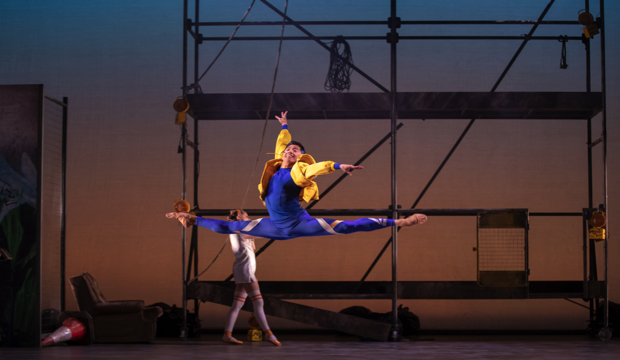 BRB, Peter and the Wolf, Tzu-Chao Chou as The Bird, photo Andrew Ross
Choreographically, Ruth Brill’s Peter and the Wolf relies to a large extent on the language of classical ballet; but its modern day urban setting requires a wider range of steps and moods.

‘Quite a few characters are on pointe, but also we have some characters in trainers: Peter’s in trainers, grandad is also in trainers. I have worked with each individual, each character on their own to develop their own kind of movement content. It’s quite physical, it takes inspiration from street dance, it’s quite grounded and playful.’

Ruth Brill – Ballet Shoes
The current remake of London Children’s Ballet Ballet Shoes is quite a different proposition, but one that is close to Ruth Brill’s heart in more ways than one:

‘Because I danced in the original production in 2001, I have a lot of memories, especially because I had the wonderful part of Pauline, and still to date, even after my professional career, it still holds some of my favourite on-stage moments.’

Set in the 1930s, Ballet Shoes tells the story of the three Fossil sisters, Pauline, Petrova and Posy. Pauline and Posy dream of a life on stage; while Petrova is a budding mechanic. The original choreography was by Cathy Marston, currently one of the most recognisable names in narrative ballet.

Cathy Marston is one of the inspirational figures in Ruth Brill’s development as a choreographer; so, in adapting Marston’s work for the current, 25th anniversary version of Ballet Shoes, she wanted to keep as much of it as possible.

‘I’ve tried to keep the essence of everything the same. The scenario is exactly the same, the way the scenes are structured is the same; but then I kind of picked out characters because, for example, we have a lot more good boys now than in 2001, so I’ve tried to beef up the boys' roles within the framework that’s already there. I’ve also completely redone the big ballet scene with my own choreography and added fun little characters here and there.’

Both productions have enough variety to appeal to both children and adults, and together they will give us a clear illustration of the Ruth Brill’s talent and scope as a choreographer about whom we're likely to hear a lot more in future.

Peter and the Wolf