After its highly satisfying Programme A, San Francisco Ballet Programme B goes off piste with mixed results

It contains ballets by three very different choreographers with musical scores ranging from Oliver Davis to Björk. Some work better than others.

The evening starts with Edwaard Liang’s The Infinite Ocean. The US-based Taiwanese choreographer was inspired by the message from a dying friend: ‘I will see you on the other side of the infinite ocean,’ to create a work meant to hover between life and death. The designer Alexander V Nichols’ set is a gigantic circle of murky yellow light, not unlike Olafur Eliasson’s memorable 2003 installation at Tate Modern.

Two couples – Sofiane Sylve and Tiit Helimets, and Yuan Yuan Tan and Vitor Luiz, stunning dancers all! – are backed by an ensemble of eight, all dressed in gilt speckled leotards (the women) or diaphanous short pants and tunics (the men).

Designer Mark Zappone’s costumes sit well on the women but are distressingly unflattering for the men.

Liang’s choreography is formulaic and uninspiring, its over-reliance on acrobatic lifts and forced extensions irksome and uncomfortable to watch. 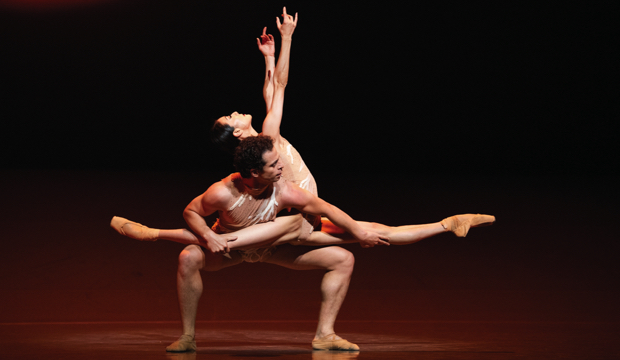 The British choreographer Cathy Marston specialises in narrative ballets, and her consummate story-telling skills were much in evidence in the second piece of the night, Snowblind (pictured up top).

Based on Edith Wharton’s 1911 novella Ethan Fromme, it focusses on the love triangle between a poor farmer (Ulrik Birkkjaer) trapped in a loveless marriage to an older, hypochondriac, manipulative wife (Jennifer Stahl), who inevitably falls in love with his wife’s young and beautiful helper (Mathilde Froustey).

All this in a desolate snow-shrouded landscape, the snow represented by dancers that swirl on and off stage dressed not in white but in an oppressive muddy brown.

Using dancers to embody the ever more oppressive snow, their hunched movement increasingly intense until the final implacable swirls, was an inspired decision.

Cathy Marston is particularly adept at conveying a wide range of emotions in pas de deux; and so it is here, the farmer’s duets with his wife dutiful on his part, clinging on hers; and his duets with his young lover full of yearning for salvation from his sterile marriage, while she glows with the innocent dazzle of new (first?) love.

What to say about Arthur Pita’s Björk Ballet? 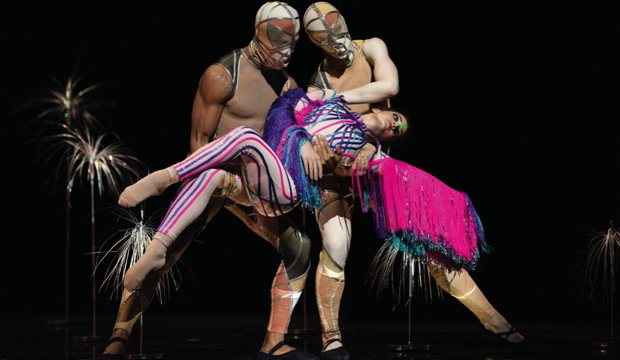 You can never discount Arthur Pita, a genuinely original creator of stage works. He seems to have an infinite supply of outlandish ideas, and no fear of putting them out there. Some work better than others, but most deserve a second look.

His Björk Ballet, inspired by, and set to the Icelandic superstar’s music – and guided even more by the ambience that surrounds her – is primarily a spectacle: deliberately wild, hinting at unmentionable fetishes (face masks and muzzles anyone? leather?) and has dancers prancing around in bright red and black harem trousers; or making an entrance swaddled in tinsel.

It’s unlike anything that went before and probably anything that will come after; an eye-catching rave, full of visual surprises courtesy of Marco Morante’s Costume Design and James F. Ingalls brash lighting, with Arthur Pita credited for Visual Décor.

But a ballet? Not so much…