Plaudits, too, to the choreographer Botis Seva, this year’s guest artistic director, who was given a disparate collection of young dancers and turned them into a disciplined, cohesive and proud collective, performing Seva’s exacting choreography as if they’d been doing it all their lives.

Now on its seventh year, NYDC is run by Sadler’s Wells and brings together aspiring young dance students from around the country to work under a guest artistic director for a year. They must be aged 16–18 (or up to 24 for deaf or disabled dancers), and all their training happens during workshops and residencies in school holidays and at weekends.

Botis Seva himself is young, at 27-years-old the youngest in the roster of NYDC artistic directors that preceded him, including such established names as Akram Khan and Sidi Larbi Cherkaoui.

Seva’s is a world of restless urban youth, of the dangerous streets that gave rise to hip hop, his original choreographic language; and he says he knows from experience what it’s like to be a troubled adolescent. In fact, ‘madhead’ was his nickname at school.

No wonder, then, that he was able to connect so well with the youngsters of NYDC.

The performance itself was preceded by a black and white film that showed some of the workshopping and rehearsing leading to the completed MADHEAD, and included clips of young dancers talking about what being part of NYDC and working with Botis Seva meant to them.

What came across loud and clear was the transformative power of the experience.

So what of the performance itself? Seva used a score by his regular collaborator Torben Lars Sylvest. It’s an unremittingly loud, thumping, urban sound, with industrial rumbling built in, heavily rhythmic and syncopated.

The impressive lighting design by Adam Carrée creates a murky twilit stage where our first sight of the dancers is as an immobile, dark-clad group. When they start dancing, one first, then the collective, they do so with jerky, ritualised arm movements.

They fall to the ground, crawling like commandos in an army training camp, units separating and coming together with mind-boggling coordination.

They are restless, earthbound, as Botis Seva’s trademark scuttling around in a squat returns like a leitmotif throughout the work. There’s little hip hop in MADHEAD; what it is intensely reminiscent of is the style of Hofesh Shechter, with its highly rhythmic, hunched trotting and occasions of exaggerated posturing that also bring to mind the work of the choreographer Sharon Eyal.

If anything, once MADHEAD’s powerful initial impact subsides, it all becomes a bit samey, lacking variation over its 70 minutes of unceasing movement, where the dancers’ breathtaking energy never flags.

Botis Seva's MADHEAD combines the complexities of adolescence and the urban street in a superb way. Different layers of choreography, though, a little light and shade, perhaps, would not not have come amiss. 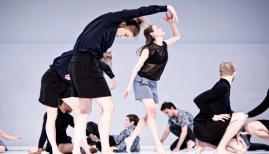 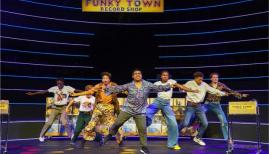