Matthew Bourne’s hugely popular dance shows come to your TV in a Festival of Classics, including his seminal Swan Lake, to be broadcast on Sky Arts

The production now on offer is a spruced-up version of the 1995 original, filmed at Sadler’s Wells during its 2018 Christmas season. Starring Will Bozier in the dual role of The Swan/The Stranger, Bourne’s Swan Lake remains as fresh and powerful as ever and is well worth viewing or revisiting. Should you want a primer, find Culture Whisper’s four-star review here.
On Sunday, 19 April at 8pm on Sky Arts.

The second ballet to be broadcast in New Adventures’ Festival of Classics is Bourne’s Romeo and Juliet. 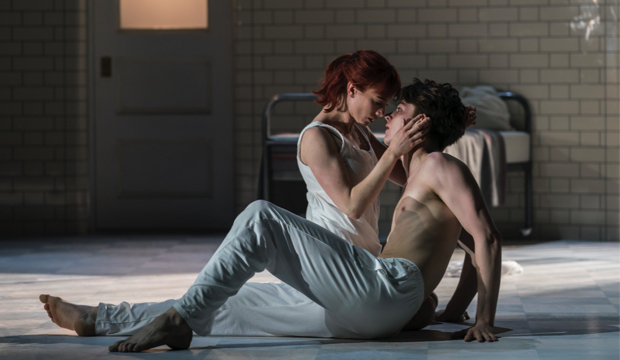 Matthew Bourne's Romeo and Juliet, Cordelia Braithwaite as Juliet, Paris Fitzpatrick as Romeo. Photo: Johan Persson
Matthew Bourne’s latest adaptation of a much-loved classic really turns the traditional narrative on its head, although it keeps the central love story between Romeo and Juliet, as well as a rather bowdlerised version of Prokofiev’s eloquent score.

The lovers are inmates of an institution for disturbed youngsters; their affair is touchingly fresh, two sensitive souls finding solace in each other. Like the original it ends in tragedy, but Bourne’s twist in the tail will leave you gasping.

Again, should you want a primer (warning, it includes a spoiler!) you’ll find Culture Whisper’s three-star review here.
On Sunday 26 April at 8pm on Sky Arts.

The third Bourne ballet to be shown in this Festival of Classics (for now, more are promised) is The Car Man, filmed live at Sadler’s Wells in 2015.

This time the choreographer got his clutches on one of the best known operatic stories: Bizet’s tale of the gypsy Carmen.

The Car Man is one of Bourne’s most filmic creations, with its very many references to 50s Hollywood film noir, most particularly The Postman Always Rings Twice. It is a rollercoaster of dark sex, unrequited love and murder (not advisable for young children). Read Culture Whisper’s three-star review of its 2015 outing, which marked the work’s 15th anniversary, here.
On Sunday 3 May at 8pm on Sky Arts.

New Adventures' Festival of Classics is part of the company’s wider Reel Adventures programme, which offers a range of activities, one for each day of the week.