It's not surprising, then, that Martha Graham and Isamu Noguchi, himself a pioneering sculptor, found each other at a particularly prolific time in the evolution of contemporary arts in the US. They collaborated, producing over 20 works together. One of the most arresting exhibits in the Noguchi exhibition at the Barbican Art Gallery is the sculptor's 'spider dress', which he designed for Graham's retelling of the Greek myth of Medea in Cave of the Heart. 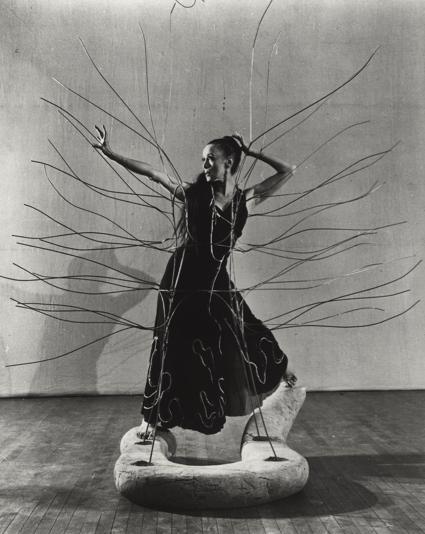 Martha Graham with Spider Dress and Serpent for Martha Graham's Cave of the Heart, 1946. Photo: Cris Alexander, The Noguchi Museum Archives ©INFGM/ARS – DACS
Now the Barbican complements its comprehensive Noguchi retrospective with a Martha Graham Weekender, made up of live performances and a film screening.

On Saturday 16 October Yolande Yorke-Edgell, alumna of the Martha Graham School and director of Yorke Dance Project, performs Martha Graham's 1930 solo Lamentation in the Barbican Art Gallery. Set to music by the Hungarian composer Zoltán Kodály, the work exemplifies many of the concepts Graham and Noguchi agreed on, such as the radical use of space. It will be performed among Noguchi's indoor garden of sculptures on the lower floor of the gallery every hour from midday to 5pm. Also performing will be Freya Jeffs of Yorke Dance Project.

On Sunday 17 October at 3pm Barbican Cinema 2 will present the world premiere of Robert Cohan's Lockdown Portraits, a series of seven short films produced by Yorke Dance Project and directed by David Steward.

Sir Robert Cohan, who died in January 2021 at the age of 95, began his professional dance career at the Martha Graham Dance Company, before leaving to co-found the London Contemporary Dance School in 1966, bringing the Graham technique to the UK. He, too, is a key figure in the development of modern dance.

The screening will be followed by a talk with Yolande Yorke-Edgell and David Stewart, hosted by Kenneth Tharp, formerly a dancer with Cohan's London Contemporary Dance Theatre.

Cave of the Heart