Ballet Black is a small-scale company that punches way above its weight. Set up to showcase the talent of dancers of Black and Asian heritage, Ballet Black celebrates its 20th anniversary this year with a double bill of contrasting works.

Then or Now (pictured top) is choreographer Will Tuckett’s third work for Ballet Black. In a programme note, Tuckett puzzles over how to tell stories in the current political climate where ‘every action we take…has become a political act.’ In Then or Now he gives Ballet Black’s eight dancers a vehicle to tell their own stories.

Not that there is a clear narrative line in his work, more a sequence of impressionistic neo-classical dances set to an original combination of the spoken word and Von Biber’s Passacaglia adapted and played on the violin by Daniel Pioro.

For what he calls his ‘spoken score’ Tuckett chose the powerful words of the American activist poet Adrienne Rich. They inspire the dancers without dictating their movements, except on the very rare occasions when the movement fleetingly mimics the words.

The stage is set with plain white chairs and skilfully lit by David Plater. The eight dancers are in simple monochrome costumes (Yukiko Tsukamoto). Competent performers as they all are, it’s hard to get your eyes off senior dancer Cira Robinson, with her long, slender limbs, perfect placement and the charisma of a real diva.

If fault had to be found with this work, it would be that sometimes the words are so powerful, their incantations so enveloping, that they momentarily draw attention away from the dancing.

The second piece in the programme comes from company dancer Mthuthuzeli November, who's fast becoming a choreographer of note. 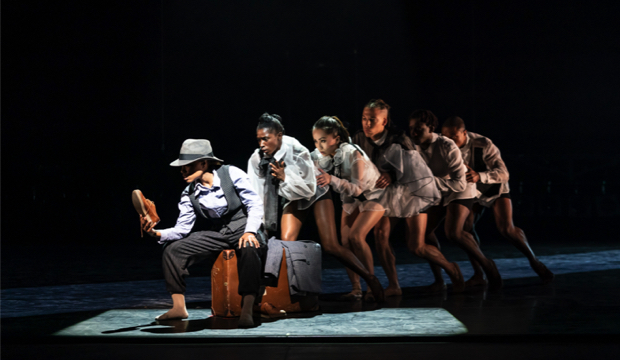 Ballet Black, The Waiting Game. Photo :Bill Cooper
Entitled The Waiting Game, this piece is bursting with ideas and references, not least to Samuel Beckett’s Theatre of the Absurd.

A door slides slowly towards a crumpled man (November himself) and Sayaka Ichikawa peeks over the top as if daring the man to come through.

The man, though, seems paralysed by his own angst, and as a monotonous voice intones his unchanging day-to-day life – ‘get up. Brush my teeth. Open a door… I go to work’ and so on and on – he twists and turns, crumples and clutches his head, jumps and crouches.

The door opens and a group of bizarrely clad figures file in (costume designer Peter Mood). In their flouncy blouses, some with big sleeves, some with ruffs, they tease and challenge the man. Are they his own obsessive thoughts made flesh?

Eventually he is persuaded through the door only to emerge in sequins along with everybody else dancing exuberantly to Etta James’s Something’s Got a Hold on Me.

It’s a jolly coup de théâtre, a worthy finale to an evening of many moods and splendid dancing.

NOTE: Ballet Black's new film,Eightfold, involving eight dancers and eight choreographers from around the world, and created over one year, is now available to download for free from All 4, Channel 4's on-demand service.