There was a moment when time stood still in Birmingham Royal Ballet’s Curated by Carlos very uneven triple bill: when two monstres sacrés of ballet, Carlos Acosta and Alessandra Ferri, danced an exclusive pas de deux, created for them by the choreographer Goyo Montero, within his piece Chacona, which closes the programme.

It was the Italian ballerina’s debut with BRB, although she had danced with Carlos Acosta before in a gala in Havana, and their chemistry remains intact. Both are, of course, in the twilight of their dancing careers, Acosta now mostly in creative management duties as artistic director of BRB, and Ferri enjoying a late renaissance in a carefully calibrated return to the stage following premature retirement.

And yet, and yet… seeing them dance together is still an almost mystical experience. 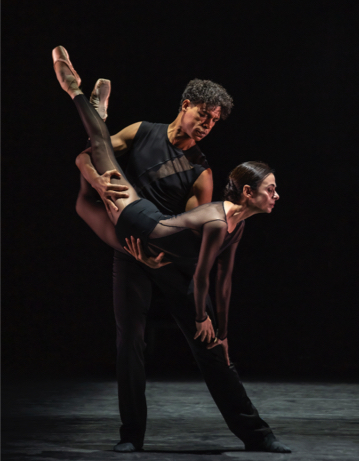 Carlos Acosta and Alessandra Ferri in a new duet by Goyo Montero, as part of BRB's Curated by Carlos programme. Photo: Johan Persson
Goyo Montero cleverly built their pas de deux within the complicated architecture of Chacona. We first see two lines of black-clad dancers from which Acosta and Ferri almost imperceptibly emerge. Their dancing is tender, both seeming to exist in their own unhurried world enveloped by Bach’s meditative Chorale Prelude No. 3, played on the piano by Jonathan Higgins. At times they part and cross the lines of dancers in opposite directions, as if separated by a wall; crossing back they find each other and their inner peace again.

The whole thing lasts maybe five minutes, but they are undoubtedly the best five minutes of the evening.

Chacona is primarily an exercise in synchronicity danced to Bach’s Chaconne from Partita No. 2 in D Minor, played on stage by violinist Robert Gibbs and then by Tom Ellis on guitar. Fast and energetic, it has the dancers form lines that merge and intersect, with couples occasionally peeling off to perform brief, jagged, interrupted pas de deux.

Its geometries are interesting and fiendishly difficult to perform with the required degree of uniformity, but 16 BRB dancers, an undifferentiated group of corps, soloists and principals, give it their all.

The programme starts with City of A Thousand Trades, which BRB commissioned to mark the 30th anniversary of its move to Birmingham (its premiere meant for 2020 was delayed by the pandemic). Choreographed by Acosta's fellow Cuban and former Rambert dancer Miguel Altunaga, City of a Thousand Trades is a love letter to Birmingham, referencing the many immigrant workers from all parts of the Commonwealth who came to the city in the 19th century and whose labour contributed to make Birmingham prosper and become the UK's second city.

To a sound score that blends the spoken words of the local poet Casey Bailey with music by Mathias Coppens, 12 dancers spend much time moving props around the stage, signifying the hard toil of those who built the city, but when they finally get to dance, they give impressive life to Altunaga’s fierce, syncopated choreography, modelled on Rambert’s own contemporary style.

The less said about Daniela Cardim’s Imminent, the bill’s middle piece, the better. With staggeringly unimaginative choreography, which attempts and fails to communicate weighty themes, and danced to a desperately derivative score by Paul Englishby, this one must surely be chalked up to experience and quietly abandoned in future.

City of a Thousand Trades