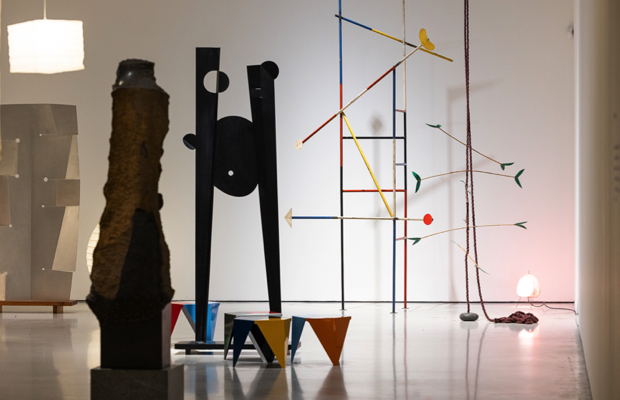 Noguchi, Installation View. Barbican Art Gallery. Photo: © Tim Whitby/Getty Images
Isamu Noguchi (1904-1988) was born in Los Angeles to an Irish-American mother and a Japanese father and spent his childhood in Japan. Throughout his life he travelled around the world searching for a place where he felt he belonged; and in the process absorbed many diverse cultural influences.

Trained in sculpture in New York, he was subsequently apprenticed to the great Constantin Brâncusi in Paris, and some of his early works exhibit Brâncusi’s highly polished surfaces and soft, rounded lines, working with the materials to, in Nogushi’s own words, ‘take the essence of nature and distill it.’

Soon he came to believe that sculpture should move beyond its own niche and dialogue with other arts and life itself. Two rare black and white film clips show performances by the pioneer of contemporary dance Martha Graham, with whom Noguchi collaborated, providing scant props – a rope and a fence – to turn her stage into a sculptural space.

His commitment to sculpture engaged with life is shown in the vast anti-fascist mural History Mexico, created in Mexico City at the request of the celebrated Mexican painter Diego Rivera, photographs of which are shown in the section entitled Political Conscience.

Also documented through letters and images is Noguchi’s voluntary sojourn in an internment camp for Japanese-Americans during World War II, where he attempted to create an arts and recreation centre aimed at improving the residents' lives.

If the top floor of the gallery is divided into small exhibition areas, the ground floor presents wide open spaces, where Noguchi’s works can be seen in their relationship to each other, interspersed with his light fixtures – his Akari – that play on the double meaning of the Japanese word: illumination and lightness. 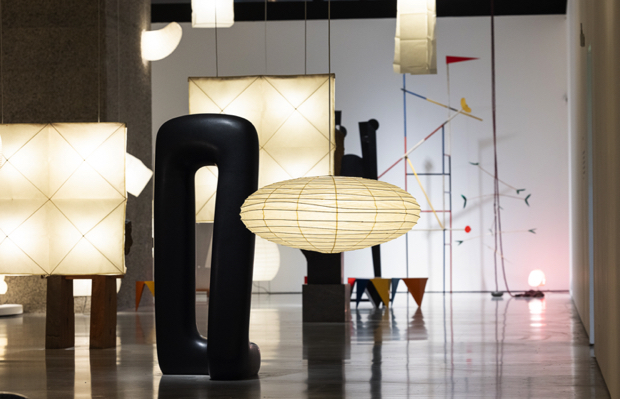 Nogushi, Installation View, Barbican Art Gallery Photo: ©Tim Whitby/Getty Images
In every exhibition there is one piece that speaks directly to each visitor. For this visitor to the Noguchi exhibition the one piece that suddenly brought it all home was a relatively modest bronze cast entitled, This Earth, This Passage. An irregular round shape with a void in the middle, its dark brown wavy surface glistened like mud, and as lit from above by an Akari it seemed to pulsate with elemental life. It was hardly one of the most significant pieces in the exhibition, yet it seemed to contain so much of what Noguchi was striving for.

Noguchi worked with many media – wood, clay, metal and nature itself – to create both pieces and spaces that illustrated his conviction that art should be 'something which teaches human beings how to become more human.'

And as your visit to this engrossing exhibition draws to its end, somehow you do feel more human.