Les Ballets Trockadero de Monte Carlo Review 4 Les Ballets Trockadero de Monte Carlo Review Teresa Guerreiro
The Trocks are back in London after a four year absence, and oh, how we’ve missed them! This all-male troupe from New York have a sharply observed take on the ballet classics, which they send up with great artistry and an irresistible sense of fun amid tutus, testosterone, oversize pointe shoes and hilarious monikers.

Installed at the Peacock Theatre for two weeks at the start of an extensive UK tour, the Trocks bring two programmes. Programme A opens with their take on Act II of Swan Lake, where a bevy of nervy, energetic swans accompany their Queen, danced by the petite Takaomi Yoshino, aka Vavara Laptopova. A beautiful classical dancer, Yoshino is also a very good comic actor, flapping his wing-like arms and exaggerating original gestures and poses to very funny effect.

Prince Siegfried is Giovanni Goffedro, aka Dmitri Legupski, dealing imperiously with a hyperactive Benno (Duane Gosa, or rather Vladimir Legupski), his danseur noble persona pompously striding the stage – he is, after all, a Royal Prince! – as he produces hyperbolic declarations of love for the Swan Queen.

The thing with the Trocks is that they create a climate of such hilarity that you are always anticipating the next gag with a bubbling build up of pleasure.

The Trocks play on, and subvert all manner of gender expectations, so in the Swan Lake pas de trois which opens the second part of the programme, a short Jake Spearman (Timur Legupski) is flanked by two statuesque ballerinas, Helen Highwaters (Duane Gosa) and Eugenia Repelski (Joshua Thake). He partners them valiantly to great comic effect, but in the end the roles as reversed when the girls effortlessly lift the boy between them.

Incidentally, Marius Petipa, choreographer of the original Russian Swan Lake is credited in the list of company staff as ‘Stylistic Guru’. Not even the printed programme escapes The Trocks’ wit...

Jerome Robbins is the next butt of The Trocks’ subversion, with his In the Night, to music by Chopin, turned into Nightcrawlers. They keep the original three couples, but rather than following Robbins’s neat exploration of courtly, romantic and passionate love they set about swapping partners and creating havoc.

The Dying Swan is a Trocks’ favourite, performed here by company veteran Robert Carter, or rather Olga Supphozova, as an irritable, profusely moulting swan going to her death with very poor grace (but with great technical proficiency).

Programme A ends with a piece perfectly suited for The Trocks: a slice of high Soviet kitsch, Walpurgisnacht, or rather Valpurgeyeva Noch. 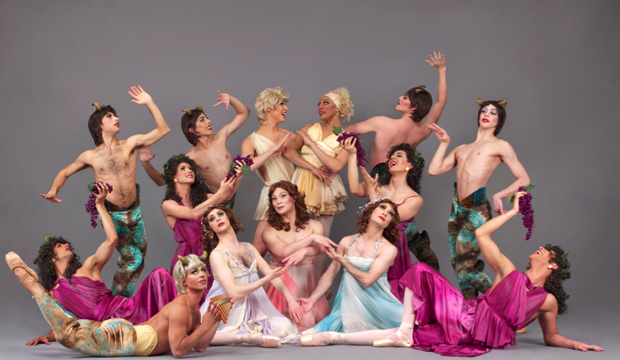 Programme A is on at the Peacock until Saturday 10 September