Set on a farm and its rural surroundings, it tells of Lise, the resourceful daughter of the well-off landowner Widow Simone, who is in love with the poor Colas. Widow Simone wants to marry off Lise to Alain, the simpleton son of a nearby landowner. Wouldn’t you know it, in the end love conquers all, not only the love of Lise and Colas, but also that of abrasive but kind-hearted Widow Simone for her only daughter.

Osbert Lancaster’s sets are a delight of colour and detail, portraying an idealised countryside, with a farmyard, plenty of haystacks, and even in one scene a maypole with streams of colourful ribbons with which the dancers trace intricate and dazzling patterns.

Ashton’s delicate humour is clear from the very beginning. The curtain goes up as dawn rises and the henhouse comes to life, with dancers kitted out as rooster and hens performing a lively little dance. I defy you not to smile… or even chuckle.

Later, a real white pony is brought on: Peregrine, a veteran of this ballet, is always a hit with audiences. He pulls the cart with great panache, only occasionally misbehaving.

Ferdinand Hérold’s score is full of hummable tunes, as well as touches of humour and some dreamy lyrical passages for the love duets.

Of course, all this would count for very little without good dancing; and the cast in this film is absolutely the best. Marianela Nuñez is the perfect Lise: feisty, mischievous, loving, handling the demanding choreography with ease and aplomb.

Acosta is an irresistible Colas, with his cheeky smile and virtuoso dancing; and you never once doubt that he’s going to get his girl. The deep chemistry between Nuñez and Acosta is one of the attractions of this cast. Another is Will Tuckett as Widow Simone. 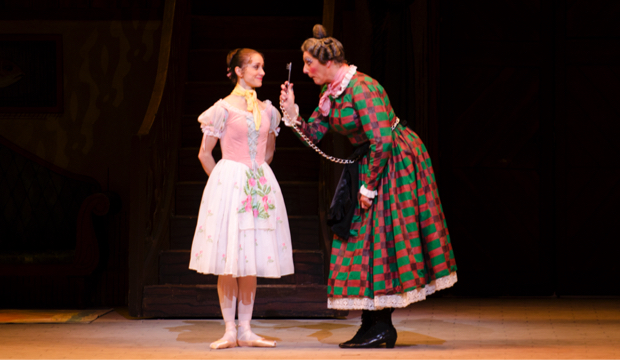 Marianela Nuñez as Lise and Will Tuckett as Widow Simone in La Fille Mal Gardée © ROH 2012 Tristram Kenton
Ashton cast this role en travesti, but hitting the right tone is not easy: Widow Simone is not a pantomime dame (although inspired by the old English panto tradition) much less a drag queen. She must be amusing, not ribald, and simultaneously endearing.

Over the years this reporter has seen many performances of La Fille Mal Gardée, and many interpretations of Widow Simone – good as many were, none came as close to perfection as Tuckett’s. Watch out for his laugh-out-loud clog dance!

In short, whatever you do, don’t miss The Royal Ballet’s La Fille Mal Gardée.