And the winner is…

…English National Ballet, first of all, for having impeccably produced and streamed a varied, educational and totally engrossing programme, despite having just emerged from six months of lockdown and labouring still under strict Covid-19 restrictions. No amount of plaudits will do the company justice.

As for the actual prizewinners on the night… bear with me! As with the awards ceremony itself, a review needs its quota of suspense.

Emerging Dancer is an annual competition designed to identify and encourage young company members. Chosen by the public, the finalists normally perform in a theatre before a select jury and live audience, all rooting for their preferred dancer – and that effervescent audience, of course, gives the dancers a tremendous boost.

This year, however, the six finalists performed in the vast production studio of the company's impressive new HQ on London City Island, before a small invited audience, all masked and demurely sitting around socially distanced tables.

Steered by TV presenter Ore Oduba, the programme started by giving us a peek into the lockdown lives of the six finalists – Victor Prigent, Miguel Angel Maidana, Emily Suzuki, William Yamada, Carolyne Galvão and Ivana Bueno – through short interviews as well as clips of their practising in their own homes. Lockdown was difficult for some, 'with nothing to look forward to', in the words of Victor Prigent, while providing a measure of respite for others, like Emily Suzuki, who actually 'enjoyed' the opportunity to recalibrate.

Soon, though, they were doing what they do best: dancing. Each pair performed twice: first in a highly technical classic pas de deux, designed to showcase their technique, then in a specially commissioned contemporary piece, meant to demonstrate their versatility and interpretative powers.

Up for grabs were two awards: Emerging Dancer, to be awarded by a jury of dance luminaries chaired by ENB artistic director Tamara Rojo, and a People's Award, decided by the show's international online audience, who were asked to vote by text for their favourite dancer during the stream.

The highly subjective People's Award went to Victor Prigent, more, perhaps, for his touching performance in his contemporary pas de deux with Emily Suzuki, Hollow, than for his occasionally imprecise showing in Petipa's technically demanding Satanella. 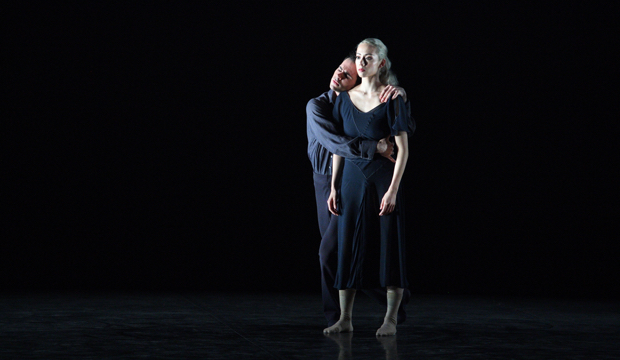 Throughout you had to keep reminding yourself that they were all young dancers in the first stages of their careers, and that they'd had no proper intensive dancing for more than six months, such was the level of commitment and good dancing on show.

This also made it quite difficult to predict the winner. However, here we go: Emerging Dancer 2020 is – drum roll! – Ivana Bueno. A corps de ballet dancer, originally from Mexico, she's been with ENB for just two years, having joined in 2018.

Partnered by William Yamada, Bueno danced Petipa's The Talisman pas de deux with assurance and aplomb, and showed off her sense of humour and hyperextensions in the contemporary piece FULL OUT (pictured top).

As a kind of bonus, we were treated to short performances by last year's winners: the irrepressible Rhys Yeomans, People's Choice 2019, brought a real sense of devil-may-care enjoyment to his interpretation of the playful Mañana Iguana; he is definitely one to watch! And Emerging Dancer 2019, Julia Conway, showed enough confidence to perform one of her boss's party pieces, the fiendish Esmeralda solo, with its multiple turns and extended balances.

The English National Ballet Philharmonic, conducted by music director Gavin Sutherland, provided live music from a separate studio upstairs from the performing area. You'd never have guessed that the musicians (all duly masked, of course) were elsewhere.