The concentration it requires means her brand of dance is not for everybody; and wherever her 2017 work, Mitten wir im Leben sind/Bach6Cellosuiten, which translated means In the midst of Life we are/6 Cello Suites by Bach, has been performed, there has been a steady stream of walkouts.

And so it was during its UK premiere at Sadler’s Wells.

As the name indicates, this work is choreographed on the complete Suites for Solo Cello composed by Johan Sebastian Bach in the early years of the 18th century, which are today considered a landmark in the history of music.

It’s not difficult to see why, in the precision of their baroque structure, Bach’s 6 Cello Suites appealed to Anne Teresa de Keersmaeker. Mitten wir im Leben sind/Bach6Cellosuiten proposes to translate into movement the architecture of the music.

Sadler’s Wells' cavernous stage is entire bare, devoid of wings or backcloth. Before each Suite on walk de Keersmarker and one of her dancers and use coloured tape to draw patterns on the stage. Unfortunately, these are not really detectable from the stalls, so we can’t draw any conclusions as to their possible meaning, or lack of it.

Then the choreographer comes to the edge of the stage and, her face stern and unsmiling throughout, semaphores the number of the Suite we’re about to see/hear. She leaves. The cellist, with his back to the audience (his position on stage changes for each Suite), strikes up, the graceful movement of his bow on the cello strings itself a harmonious, diaphanous dance.

For the first four Suites, each composed of three movements, the pattern is constant: one solo dancer is joined mid-performance by de Keersmaeker, whose first phrase – arms raised up, followed by a sway of the torso and ending in three straight-legged hops backwards – doesn’t change. They move together, but not necessarily in unison, their plimsoles tapping the floor as if to provide the occasional accent to the music.

Things change at the end of Suite 4 when Boštjan Antončič continues to dance after the music has stopped; and Suite 5 is danced solo by Anne Teresa de Keersmaeker in almost complete darkness, with the the narrow circle of a spotlight on Queyras providing the occasional play of light and shadow.

The whole thing coalesces in the final section, when all the performers come together to dance their respective sequences simultaneously.

Mitten wir im Leben sind/Bach6Cellosuiten is an admirable but not exactly enjoyable work. Rather, it feels a bit like solving a complicated mathematical equation if you’re not particularly mathematically inclined. Your pleasure comes from lasting the distance, rather than from the process itself. 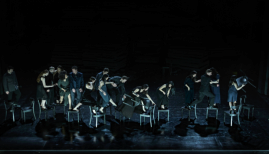