The dancing is glorious, too – full of joy, humour and tightly choreographed anarchy, as much as that might sound like an oxymoron.

The music is fascinating: because copyright strictures prevented the use of much more than just a few nods to the original album, composer Ethan Iverson was able to reimagine many of the tracks to create a weird and wonderful score, which is played live by a six-piece band (soprano saxophone, trombone, theremin, piano, keyboard and percussion) with lyrics sung by the baritone Clinton Curtis.

Sgt Pepper’s Lonely Hearts Club Band, acclaimed by some as the best rock and roll album of all time, was published in 1967. To mark the 50th anniversary in 2017 Liverpool City Council asked the American choreographer Mark Morris to create a work celebrating it. He came up with Pepperland.

Mark Morris was the obvious choice. A profoundly inventive and musical choreographer, capable of high lyricism and impish humour, sometimes simultaneously. His own Mark Morris Dance Group has been going for almost 40 years, its dancers, veteran or novice, totally attuned to the master’s style.

On a bare stage, save for an irregular line of crushed foil at the back, the colours of which change with the lighting (set design John Henckens, lighting Nick Kolin), our first sight of the dancers, heralded by an extended musical chord, is a huddle that slowly dissolves to reveal individuals.

They wear costumes that point to the 1960s and the album’s cover, one of artist Peter Blake’s most famous creations: short skirts or dresses for the women, some with geometric patterns straight that recall op art; two piece suits for the men in tones of turquoise, bright pink, green, yellow and purple (costume design by Elizabeth Kurtzman).

The band strikes up with the theme song of the album, Sgt Pepper’s Lonely Hearts Club Band, and soon we’re well into Mark Morris territory as the singer introduces individual dancers (all wearing sun-glasses, which they later discard) as figures appropriated by popular culture, whose poses they mimic: Shirley Temple, Sonny Liston, Marilyn Monroe, Albert Einstein…

From then on, dancing takes over: mostly in groups, the dancers take to the stage in relays, their unison soon turning into canon. Groups dialogue with each other, lifts projecting the colours upwards, along with our spirits.

One section, accompanied by the longing sound of the saxophone, brings on three couples of diverse compositions, dancing love duets on a darkened stage – the atmosphere is that of a night-club in the small hours.

The Beatles’ search for inspiration from Indian music and asceticism gives rise to a pensive section that evolves around a dancer sitting cross-legged in a meditative pose; When I’m sixty-four is a comic romp that gradually turns into musical cacophony mirrored by zany dancing.

You get the gist… At only 70 minutes without an interval, you’re unlikely to find a more concentrated little pill of happiness anywhere. Go! 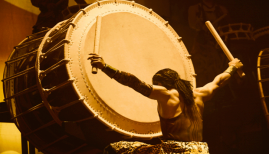