Ballet Black celebrated its 20th anniversary at the Barbican Theatre with a double bill of contrasting works, highlighting its remarkable history and promising future

Ballet Black at 20 review 3 Ballet Black at 20 review Teresa Guerreiro
You could forgive Ballet Black and its indomitable founder and director Cassa Pancho for feeling a little bit smug. After all, this eight-strong ensemble for predominantly black ballet dancers celebrates its 20th anniversary in buoyant form, as a self-assured, multi-award winning neo-classical company, with an enviable repertoire of specially commissioned works.

It’s all a far cry from Ballet Black’s humble beginnings; and the first piece in this celebratory double bill, Say It Loud, is meant as a loose take on the company’s history. Choreographed by Cassa Pancho and the dancers, it is set to a soundtrack assembled by Cassa Pancho with additional input from composer and MC Michael ‘Mikey J’ Asante, of Boy Blue fame.

Interspersed with the musical tracks, that range from Steve Reich to urban rap, calypso, the blues and African gospel music, we hear the comments, both positive and negative, that have punctuated the company’s life. They’ve had to contend with sheer incomprehension, outright hostility, and unreasonable demands that they should only represent black struggles and traumas.

Despite that, over the years they they’ve built up a loyal, diverse audience, many of whom saw themselves represented for the first time. One of the positive comments on voice-over said, ‘I felt seen.’ Another, ‘It felt like the future.’

Throughout the seven sections of Say It Loud Ballet Black’s dancers go through a series of academic ballet steps, as if to prove they can, their dances infused with light and humour. 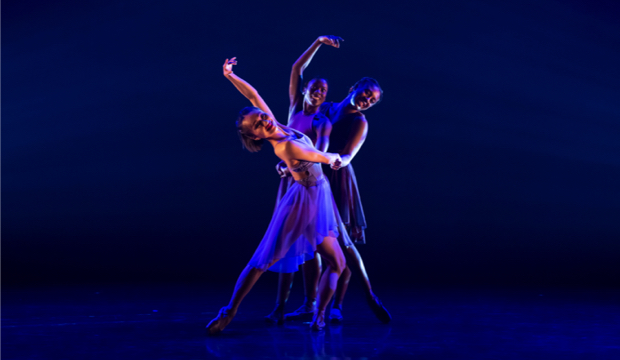 None of it is the best choreography you’re ever going to see; it is more of a jolly birthday party, the good vibes of which wash over the audience.

What the first part of the programme lacks in depth is more than made up for by the complexities of Gregory Maqoma’s Black Sun, which comes after the interval.

London became acquainted with the South African choreographer Gregory Maqoma in 2019, when his remarkable requiem Cion featured in that year’s Dance Umbrella. Black Sun, especially commissioned by Ballet Black and also set to a score by Asante, carries a much denser narrative.

Ballet Black, the company in Black Sun. Photo: Bill Cooper
We’re told it draws its energies from the sun and the moon, creating an unbroken line between ancestors and descendants. The supernatural plays a key role. It’s not easy to follow its loose narrative, but what is undeniable is the commitment and versatility of Ballet Black dancers, and the confidence with which they tackle powerful African dances, and the piece's visual impact.

So, Happy Birthday, Ballet Black, and here's to the next 20 years.